A  quick glance at the current 2011 Toyota Tundra Bassmaster Angler of the Year standings reveals a list of names that the heady fan realizes are anglers that are among the best in the world.  Alton Jones, Terry Scroggins, Kevin VanDam, Steve Kennedy, Edwin Evers, and the list goes on.

While all of those anglers are skilled professionals, one of them had a steep learning curve in order to find himself listed among the best in the world.  Scroggins made a name for himself immediately; he finished 13th in his first B.A.S.S. event in 1999 at the St. John’s River in Florida.  He won his second B.A.S.S. entry in 2002; again at the St. John’s River in December of 2011. 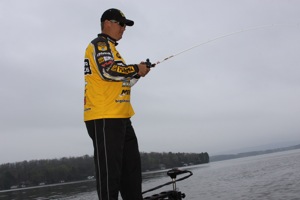 In fact, the early part of his career had a familiar ring; if there was grass on the lake, Scroggins was a factor.  If the lake was not a grass fishery, Scroggins was hit or miss. However, being the consummate professional he is; Scroggins changed that.

I had to find a way to be more competitive everywhere,” he said.  “When your entry fees are $5,400 an event; you can’t go very long without a paycheck and stay on tour; I had to learn to adapt to my conditions.  I had to learn to throw a deep crankbait, a big worm and even a Shaky Head.”

The result of his effort to learn more has turned Scroggins into one of the most consistent angler on tour.  He can hold his own at just about any venue, and when he comes into his comfort zone; he is an angler that others look over their shoulder for.

Make Yourself Do It
Scroggins said that the decision was made for him when he saw how good his competition level was.  “When you study the game like we do you realize that you’re getting your butt kicked by guys who are more versatile than you,” he said “At that point you realize that you have to do a little extra work to learn things that can make you be more efficient.”

He also said that he saw some techniques that anglers were beating him with, and while he knew what they were, he didn’t know much about them.  “I didn’t know much about Shaky Heads, dropshotting or splitshotting, but I was getting beaten by guys using them,” he said.  “So, I took them back to Florida and learned how to use them.”

While the shallow, grass laden waters of Florida might not seem like prime finesse waters, Scroggins was determined to find comfort with those techniques.  He found that he had to force himself to practice those methods, even when his favorite methods might be the best way to catch fish at the time. 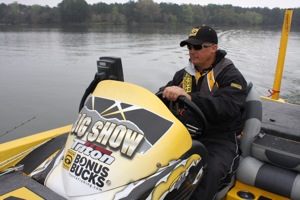 A Matter of Survival
While professional anglers are subject to difficult fishing conditions that force them to use alternative tactics from the start of a tournament; Scroggins said that being versatile, and learning to adapt to the conditions has also made a difference for him as a tournament progresses.

“There are tournaments that can change so quickly that we need to be able to fall back to a different technique to catch bass,” he said.  “It may not be weather related, but the conditions might force us to try and get bites where we weren’t having trouble before.”

He used Tennessee Valley River Lakes as an example of this kind of phenomenon.  He said that a body of water like Kentucky Lake is a place that anglers use big crankbaits, big spoons and big worms to generate strikes; however, the effectiveness of those techniques is largely current related.  The power companies often don’t generate power on weekends, so the current flow is diminished or cut dramatically.  Scroggins said that is a time he has had to fall back on a different program.

“I’ve found several times where I had to leave the crankbaits alone and pick up a Shaky Head or a dropshot to catch fish where I’d been crankbaiting them earlier,” he said.  “Learning how and when to make those adjustments is key to being successful on tour.”

Learning to Adapt
Scroggins said that he found one surefire way to learn new techniques was to go places he wouldn’t necessarily want to fish.  Everyone has their favorite lakes, and they have their favorite styles to fish.  For Scroggins, fishing shallow grass has long been a strength; so, he forced himself to fish deeper, clear lakes with smaller bass.

“There are lakes like Smith Lake and Logan Martin in Alabama or Lake Norman in North Carolina that are deeper, clear lakes that require different techniques,” he said.  We know on tour that it’s not going to take a whole lot of weight to win there, so we key on using techniques that are matched to those conditions.” 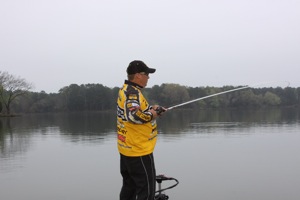 In short, what Scroggins suggested was that if an angler loves fishing shallow grass, he should go to a deep clear lake nearby and get comfortable with fishing there.  An angler who likes fishing that deep, clear water lake should spend more time getting to know the shallow water dirty fishery if he wants to be competitive everywhere.

Mixing the Two
Scroggins has finished in the top 10 the last several times that B.A.S.S. has held a tournament on Santee Cooper in South Carolina.  Ironically, it is a deep water tactic that he adapted to shallow water that has made a big difference for him.

“I learned from Woo Daves after he won the 2001 Bassmaster Classic how effective a splitshot rig could be in shallow water,” he said.  “I use that technique a lot at Santee Cooper, and it has been very effective; I even used it when I won the Bassmaster Southern Open there in 2007.”

Scroggins said that he drew Daves in a tournament and he watched Daves splitshot a small finesse worm around docks and he learned how to apply it to his areas.  Had Scroggins not experimented with new techniques, and been open to trying to become more versatile; that win may not have happened.

The First Fallback
Scroggins said that he has a priority program that he falls back to if he needs to scramble.  His first choice is to pick up a Duckett Fishing Micro Magic spinning rod and Lew’s Speed Spin reel spooled with eight-pound-test Hi-Seas Fluorocarbon line.  He will tie an 18-ounce Shaky Head on the end and rig a seven-inch YUM Houdini worm on it.

“I know that I can get bites on that rig just about anywhere,” he said.  “But, if I hadn’t taken the time to get comfortable with it, I would not be ready to use it in competition.”