Friday morning in downtown Montgomery gave way to another sweaty sunrise and a lot of good spirit about the day ahead among the eight Bassmaster Elite Series anglers, their families, and fans.

Becky Iaconelli is widely admired for her relentless commitment to keeping the Team Iaconelli ship afloat. Hereâ€™s a snapshot of what she did in a 1-hour span before Mike made his first cast within speaking distance of the fans who watched from the railing above.

First she ran inside a convenient store and bought two bags of ice while â€œIkeâ€ cinched-up tackle in the storeâ€™s parking lot. Then she snagged a kiss from him and backed his Tundra and boat down the launch ramp. Once Ike was launched, she unhooked the boat trailer, drove over to the take-off dock, parked, and unloaded their infant son Vegas from the back seat of the Tundra into a baby carrier. Once on the dock, she snared another smooch from â€œIkeâ€, and was making sure he had enough food to sustain him throughout the day. 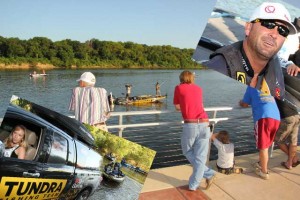 Iaconelli says if he can catch 13-pounds today, he thinks heâ€™ll do well. He had caught a least that much weight in the form of family love before he ever made a cast.

Terry â€œBig Showâ€ Scroggins continued to do his best to deal with the fact that heâ€™s fishing head-to-head today in bracket elimination format against his close buddy, and Toyota teammate, Gerald Swindle. â€œItâ€™s really a bummer,â€ said Scroggins. â€œHeâ€™s my friend, heâ€™s my roommate â€“ and most of all â€“ heâ€™s a really good angler.â€

Just down the dock sat Quantum EXO pro Gerald Swindle talking to his wife LeAnn, who pointed out to Gerald that KVD, after missing the cut earlier in the week, was graciously serving as camera boat driver today.

Swindle quickly used humor to smother the tension over he and his buddy Scroggins having to compete head-to-head by responding to LeAnn, â€œKVD driving a camera boat â€“ that just seems plain weird. If he gets to analyzing me too hard out there on the water Iâ€™ll pull down my britches and fish half naked, thatâ€™ll really spin him out.â€

Comedy aside, huge kudos to KVD for being such an incredibly humble class act and volunteering his boat, time and most of all — his insight — in order to help give fans a better understanding of what the remaining anglers are doing to catch their fish on the Alabama River today.