When asked about the paradox of emotions tied to eliminating his best buddy Terry â€œBig Showâ€ Scroggins yesterday by a single ounce, GMan said, â€œCompeting against Big Show was like going to the movies with an ugly woman â€“ you canâ€™t wait till itâ€™s over.â€

But once Swindle left the dock and ran up the river he found nothing to laugh about when he arrived at the single tiny patch of water that produced all his weight yesterday to find it covered up by a local boat. 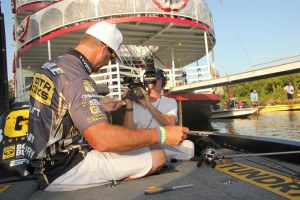 Obviously, professional bass fishing is a sport played out on public water. Legally, the local anglers that chose to sit and fish on Geraldâ€™s spot were doing nothing wrong, and had every right to be there. He remained calm, classy and even made a few funny remarks.

However, as obvious as it was that a major tournament was in progress, with a flotilla of fans following Swindle, and video cameras rolling, the local anglers gave no consideration to letting Swindle fish the spot. He eventually had to leave in an effort to go find fish somewhere else.

The locals may or may not be skillful enough to catch fish from Swindleâ€™s top location, but their presence kept him from fishing it. And with a $100,000 winner take all jackpot on the line â€“ thereâ€™s nothing funny about that.