Terry â€œBig Showâ€ Scroggins and Gerald â€œGManâ€ Swindle are trying hard to walk through their daily routines as best buddies on professional anglingâ€™s most competitive tour and act like itâ€™s business as usual this week in Montgomery.

Problem is, itâ€™s not one bit normal, because the mano-a-mano bracket elimination format that B.A.S.S. is using for Toyota Trucks All-Star Week has placed Scroggins and Swindle in a head to head competition thatâ€™s going to force one to directly eliminate the other from the bullfight. 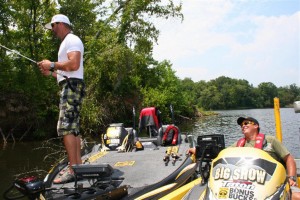 A few short soulful words barely whispered from the normally overly talkative Swindle brought it all to light as he and Scroggins steered their Tundras through the pre-dawn humidity of downtown Montgomery toward Cooters Pond to launch for practice.

â€œDamn, I hate to fish against Big Show.â€ A statement that had little or nothing to do with a fear of getting beat, and far more about the pain of having to compete against his best friend. Swindle hates the situation so bad that he publicly offered any fellow competitor $1,000 to swap places with Scroggins so he wouldnâ€™t have to compete against him. Nobody bit.

Two miles short of the Cooters Pond launch area, they stopped to get gas and grab a biscuit together at a large convenient store where they quickly had every clerk and sleepy-eyed morning commuter in the place grinning over the two-man comedy routine these two are when theyâ€™re together. Laughing as though the elephant wasnâ€™t even in the room.

Once at the ramp, they help one another launch and continue to cut up in southern drawl dipped chatter before slamming the throttle and going separate ways at 68 mph to find fish on the Alabama River.

After about seven hours of searching apart from one another, Scroggins is running wide open and spots Swindle pitching to a wad of flooded sycamore roots along a shady bank with his brand new Quantum EXO reel and comes off the throttle to bob along beside him.

Swindle willingly tells him just about everything heâ€™s found, or not found, on the riverâ€™s stingy waters, and likewise, Scroggins reveals the details of his learnings too. They canâ€™t help but try to help one another. Theyâ€™ve been doing it all year, and friendship wonâ€™t let â€˜em stop now. Swindle tells Scroggins heâ€™ll meet him back at the ramp just before 3:00 p.m., and theyâ€™ll go grab lunch together.

Over a ham and cheese on flatbread, and discussion about sending Geraldâ€™s wife LeAnn on an errand run to buy them more jigs, Scroggins explains how the two exchange help without being a competitive hindrance to one another. â€œWe donâ€™t talk about where. We talk about how and what. Weâ€™re not trying to catch the same school of fish, but if we can put our heads together and figure how they are biting, or what they are biting, then we can go our separate ways and both do well.â€

Thatâ€™s the way it normally works for Scroggins and Swindle throughout the regular season. Sadly, this week, only one can do well enough to advance through the bracket format, and it will be directly as a result of eliminating a best friend from the battle.