Skeet’s Beat – What a Week at West Point

WOW, What a week!

When I ended the last post in my Skeet’s Beat blog, I said I would really like to win West Point.  I thought I would go down there and toss a swimbait, crack some heads and have a chance to win it.  That didn’t happen – well, the swimbait part anyway.

Holy crap, is it cool to win.  I really didn’t think I had the chance to either until I got back to my room after day three and realized how close the weights were.

Then it all kind of just happened.  I caught a few early on my Lucky Craft LV 100, then the sun came out and I caught them dropshotting a smoke / purple flake Berkley Havoc Bottom Hopper, and I caught some fry guarding males on a methiolate colored Berkley Powerbait Dover Crawler floating worm too after the sun came out.

Two of my real keys to success were the line and the hooks.  I was using Berkley’s Nanofil line, and because it goes through the guides of my Wright & McGill Co. Microhoneycomb spinning rods so well, I was able to skip the lure further under obstructions, and able to make longer casts to fish that were guarding fry, so I was able to get more bites.  Of course, the best hooks on the planet, Lazer TroKar hooks held on to them, and being able to land all of those key fish that bit made a huge difference. 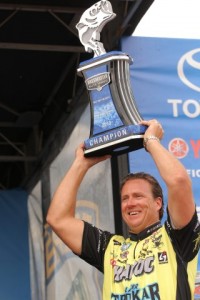 Enough of the business stuff.  I really wanted one of those new blue trophies that B.A.S.S. did this year when I saw Todd Faircloth’s at the Sabine River.  Those are sick looking trophies, and now I have one to put in the house next to my others.

I wish I could have been a fly on the wall to see Kim and the girls freak out when I won.  They’re always behind me, and it is always so cool to share successes with them.  Daddy’s bringing home another trophy girls.

Another thing I’m really excited about is where this puts me in the Angler of the Year race.  I start out every year with my number one goal being to win that AOY trophy, and the win this week put me in third place in the standings.  We’re halfway through the schedule and I’m within 14 points of Edwin and eight points behind Kevin.  I want to win that title really bad too.

But, back to business.  I don’t have much time to savor this win, I’ve got to get on my horse again and go after the Alabama River right away.  I’m really glad that the drive from West Point to Prattville wasn’t too long.  That way I’ll get some sleep and get to work again tomorrow.

After that, I’ll go home and get back into the grind there with the remodel and another event that Kim and I are working on.  I’ll be able to tell you about that in a week or two.

Tthanks for all the support – The Havoc / TroKar Big is back in the winner’s circle again – Later.