I’m back from the Bassmaster Classic in Shreveport, La.; the site of my 2009 Classic title. I learned a few things there that I’ll share with you in a minute, but first things first.

Congratulations to Chris Lane and his family on a great win. Chris is a great guy, and his passion for the sport was evident as he celebrated his big win and I couldn’t help but feel completely tickled for him as the confetti was flying. He doesn’t know it yet, but the impact this will have on his life and his career is huge, and I’m really happy for him and his family.

Now, on to my week in Shreveport. I worked the Classic Expo for Dick’s Sporting Goods, Berkley, TroKar, Wright & McGill Co., Stratos Boats and Wiley X Sunglasses. I had a lot of fun meeting fans who said they had waited a long time for me to be in a Classic Expo to meet me. The fans are part of why I do what I do, and to share some time with them was invaluable. 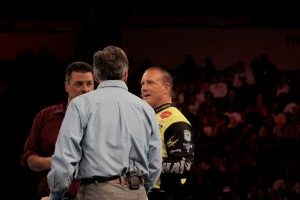 But, if I said I was 100-percent happy to be there, I’d be lying. I was able to do some work with Mark Zona and Tommy Sanders on Hooked Up at the weigh-ins on one of the days, and afterwards, I sat in the livewell to watch weigh-in. At first I was excited to be there; after all, I’m still a fan of the sport, and to feel the excitement of the event was cool – for about 10 anglers.

The longer I sat there, the more tense I got. Then I realized that the fact I was watching and not competing for a championship was really getting to me. So, after a while, I got up and left the floor and went into the media room before I headed back to the Expo.

I did some tank demos at the Dick’s Sporting Goods booth and in the Berkley booth, and while I was there; I stuck some fish. I’m not exactly sure why they kept getting caught (wink, wink) but I did manage to catch a few fish during Classic week – much to the raised eyebrows of the guys in charge of the tanks.

The guys at Dick’s told me that the attendance was excellent at the show, and that people were excited about fishing and were buying tackle, so that is always a great thing for the sport.

The excitement of the show and the Classic have got me pumped up for the 2012 Elite Series year, and my Berkley Havoc / TroKar Hooks Big Rig is headed east where I will join up with it next week. I’m excited to get out there and get to fishing.

When I get out there I’ll spend some time with Roy Halladay and Chris Carpenter as they get ready for their baseball season. I’ll stay with Roy at his house for a couple of days and go fishing with him at his lake; but then I’ll get to go to the Phillies Spring Training for a day, and I’m supposed to try to hit off of Doc while I’m there. I’m pretty sure that I won’t even touch the ball and he’ll make me look bad, but I’ll get him back when I whoop him on his lake.

It’s time to get going, and I’m ready – talk to you soon. Oh, before I forget, I’ve entered the Twitter world, follow me at @skeetreese1