There may be no more productive type of the cover in the world than vegetation; there also may not be any that’s more frustrating for an angler to know where to begin.  The sight of a massive field of matted grass certainly means bass; but it might also mean a trip to a psychiatrist afterwards for some sedatives.

Seeing vegetation and chopping away at it with abandon is not the most effective way to locate consistent schools of bass.  Having a plan and being armed with a little bit of know how is certainly the best way to begin a fishing day around heavy vegetation. 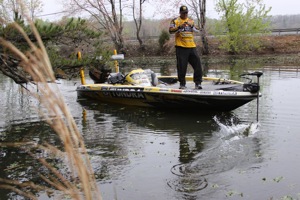 There are areas of the country that are known for their vegetation.  Texas, Louisiana and Florida have become known for having massive amounts of vegetation throughout their waterways.  While all of them produce their share of vegetation specialists, Florida anglers seem to get mentioned more frequently when the topic of grass is mentioned.

One of those names is Terry “Big Show” Scroggins; the Elite Series pro from San Mateo, Fla.  Scroggins has earned a reputation as being a versatile angler; one doesn’t rack up five B.A.S.S. wins, eight trips to the Bassmaster Classic and more than $1.3 million in earnings by being a one hit wonder.

However important the need to be proficient at multiple techniques is; Scroggins has a solid understanding and has strong roots in picking apart vegetation in search of bass.  Yes, the pun was intended.

“Anytime there is healthy grass in a lake, I know that there is a great chance that there are bass there,” Scroggins said.  “Fishing around vegetation is a great way to catch big bass, and I look forward to getting down and dirty in the weeds any chance I get.”

Scroggins said that there are several factors to consider when targeting grass; and while many people try to understand it, not too many do.  Scroggins has several pieces of advice for anglers looking to get better in their approach to fishing grass.

Think of Grass Edges as a Shoreline
The first thing Scroggins said was that anglers need to look at fields of vegetation differently than it being a big field of vegetation.  He suggested that anglers see the edges of the grass as if it were a shoreline.  “Every grassbed has edges that create points, cuts, and pockets,” he said.  “Bass use those types of areas on a hard bottom shoreline across the country, and they do the same with grassbeds.”

Scroggins examines the edges and picks areas that present something he believes bass will hold on first.  He always pays attention to grassy points sticking out into the water and follows the edges as they dip back into pockets and holes in the grass first.

Look for Differences and Mixed Greens
Throughout his fishing career, Scroggins has made a living by paying attention to what his surroundings are telling him and fishing where things are different.  “I may be looking at a field of hydrilla and one area is closer to the bank,” said the Toyota Tundra Fishing Team member.  “That could be telling me that the water is a little deeper there; so I target that first.” 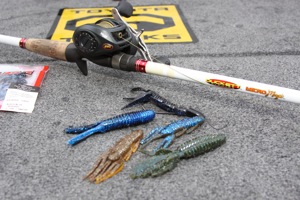 However, a visible difference such as that is not the only thing he pays attention to find different depths; he also pays attention to his bait.  “If I’m flipping down a grass bed in two feet of water and my bait suddenly takes longer to hit bottom, I need to recognize that,” he said.  “That extra eight inches of depth might be where the biggest concentrations of bass will be found.”

He also looks for areas that have several different types of vegetation coming together.  Hydrilla is known to be a great attraction to bass, but when several types come together; animal magnetism can occur.  “If I see hydrilla with some pennywort or hyacinth and some reeds mixed in; I’m fishing there,” he said.  “The difference in those root systems can hold baitfish and draw bass there for a meal.”

While he likes to have three or more vegetations mixing, he will not overlook a grassbed with isolated differences though.  Having a few stands of reeds or a few clumps of floating vegetation often holds bass.  “Those are similar to docks,” he said.  “The docks always offer plenty of shade, but most of the time fish hold on the dock pilings,” he said.  “A clump of reeds acts just like a dock piling for them to relate to.”

Smaller Baits are Best
Scroggins said that he works really hard to match the hatch when he is fishing in cover.  The Florida pro said that he spends the bulk of his time around grass with a Duckett Fishing Micro Magic Flipping Stick in his hands, and matching the size of the forage is key.  “If you were to take a net and scoop up a bunch of the cover, you would see that most of the forage under there is three to four inches long,” he said.  “I try to present baits to them that match the size of their food.”

With that in mind, Scroggins said he uses a YUM Big Show Craw the most, followed by a YUM Vibra King Tube and a YUM Wooly Bug.  The Wooly Bug is the largest at four inches, and the other two baits are under four inches in length.  However, don’t let the compact profile make you believe they won’t draw big bites.  He reported catching a 52-pound limit of bass last year on Orange Lake in Florida by Flipping his Big Show Craw.

The other consideration is the sinker, the big, one to one and a half ounce tungsten sinkers add to the overall length of the offering, so in his mind; they offer plenty of bulk to draw big strikes.

Flipping and Other Approaches
While the Flipping rod is his first choice, Scroggins also uses a pair of other lures to fish grass.  The first he uses in low light conditions around the edges; the other across the top.   He ties a Smithwick Devil’s Horse to 15-pound-test Hi-Seas Grand Slam monofilament on a 6’6” medium action Duckett Fishing rod and a 6.4:1 Team Lew’s reel.  He makes short presentations around the edges early in the morning when bass are roaming around the cover. 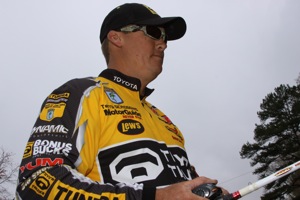 When he needs to make long presentations over the grass, he turns to a hollow bodied frog.  He uses a 7’ heavy action Duckett Fishing rod with the 6.4:1 Team Lew’s reel and 65-pound-test Hi-Seas Grand Slam Braid.

For the most part, the 7’6” extra heavy Duckett Fishing Micro Magic Flipping Stick is the preference.  He uses the same braid, a variety of hooks which he ties with a Snell knot, and a 6.4:1 left handed Lew’s Tournament Pro reel.  “I use the left handed reel because I don’t have to switch hands when the bait is falling through the cover.”

Look for High Percentage Areas
His final caution to anglers is to not get too caught up picking apart every square inch of the grass.  “Look for the obvious places first and target those first,” he said.  “Pick a weight size that lets the lure fall through the cover easily, and go Flipping.  Most of your strikes will come just as the bait breaks through the canopy, so be ready.”