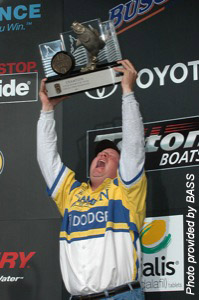 Professional anglers are oft to admit that sight fishing is rarely a winning pattern and with the uncertainty of water clarity, moon cycles, temperature and other anglers, they certainly have a valid point. For FLW Tour Pro Mike Reynolds of Modesto, Calif., he has all but eliminated sight fishing from his repertoire and instead turned to a more traditional approach for catching spawning fish.

Reynolds, who lives in Modesto, Calif., has long been regarded a top Western pro by his peers. In addition to his dominant Western resume, he has fished five Bassmaster Classics and he spent four seasons fishing what is now called the Elite Series. Before the 2007 season Reynolds made the tough decision to withdraw from tour level competition in order to care for his ailing grandmother.

During his four years away from national tournaments, Reynolds was a permanent fixture atop the leader board in regional events; he qualified for the 2010 Forrest Wood Cup through the FLW National Guard Western Series. In 2011 he joined the FLW Tour and through three events has finished no lower than 43rd.

Reynolds isn’t shy on admitting his weakness for sight fishing; he puts it quite simply when he says, “I can’t stand looking at a fish not eating my bait. Sure, every cast there are probably hundreds of fish doing the exact same thing, but mentally, it can really screw with your confidence.” So what does he do when it comes to fishing a predominantly sight fishing tournament? Reynolds turns a blind eye at the easily visible fish and instead turns to extensive research and his imagination.

Where to start
Before Reynolds ever drops his boat in the water he has already done half of his tournament preparation, “I always do research, but for pre-spawn/spawn/post-spawn tournaments I keep up with current conditions much more diligently. The slightest change is huge in the spring,” he continues, “ Once I am absolutely certain the bass will be on beds I then start my approach of locating the fish. He lists the moon phase and overnight temperatures as the factors that indicate a wave of spawning bass and suggests that these waves can last for months; a full moon and stable warm overnight temperatures are the keys.

He begins locating the bass by doing the opposite of his desired fishing method; he purposely goes and looks at them. “I want to see the depth the fish are at and the type of cover they are using to spawn on. While I’m always looking for hard bottom to hold spawning fish, there are variable conditions the fish prefer in the different lakes. Sometimes it’s grass, other times docks, or lily pads just to name a few.” After determining their depth and the unique structure that holds the fish he then seeks out large pockets with stable depths and poor water clarity. Reynolds offers his ideal conditions, “I want a large, complete pocket or bay with a good stain to it. I tend prefer about 5-8 feet of depth with deep water nearby.” 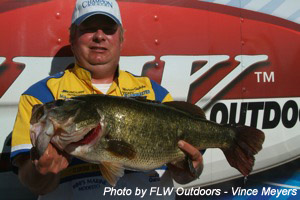 Reynolds adds the following about his practice for a spawning tournament, “A spawning tournament is the only time I won’t catch fish in practice. Normally, I’ll set on 2-3 fish per area and get some information on the size of bass in the area; it also builds confidence. Keeping that in mind, I will mostly throw a Senko  or a swimbait for my entire practice. I feel these two baits are good for searching and I can easily shake most of the bass off.”

Visualize
It sounds counter-intuitive to target bed fish in dirty water without being able to see the fish, but Reynolds uses visualization to locate bedding fish. Using his past experience and the information he discovers in practice, Reynolds pictures where beds would be and how the fish would set up on them. As he points out, there’s more to it than stumbling upon them, “I draw upon all the bedding fish I’ve ever caught when trying to put together an image of where the beds are located. Once I have my general area I slow down a lot and dial in the key pieces of structure the fish should be spawning near.”

Presentation and Tools
When Mike Reynolds keys in on spawning bass without seeing them he knows it’s going to be a methodical process. For Reynolds patience is key, “I’m not sitting on top of the fish watching it strike, but I do imagine what the fish is doing on each pitch and present the bait accordingly.” His tackle considerations include very light weights and baits that afford a slow cadence. The two baits he feels most confident in are the Yamamoto Senko and a Zoom Brush hog. For the Senko, Reynolds chooses a Texas rig without a weight so the bait can fall slowly in front of many possible bedding bass. His opinion is that the longer the fish can see the bait the better and with such deliberate side to side wobble the bait is hard for bass to resist. 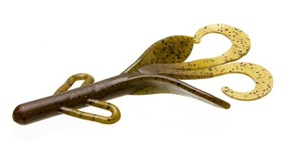 For his brush hog he prefers to Texas rig it with a 1/16 oz weight which is just enough to give the bait a nose-down presentation. He finds the brush hog to be more suitable for flipping applications and the Senko is instead an open water bait.

For both he employs 12 to 15-pound-test fluorocarbon and stresses the importance of making long casts, “I stay as away from my targets as possible and work the bait slowly back. There’s always the chance that you can pick off some other bedding bass that are in less obvious locations.”

Adapting
The last piece of advice Mike Reynolds offers is to keep an open mind to what the fish are doing. Despite his preference to fish blindly for bedding bass there are times that require you to make an audible and often those decisions lead to good results, “ I’d never pass up a chance at a big bed fish just because I’m not sight fishing. I just try and take the time I would spend looking and use it fishing and if I happen to stumble upon a fish I can see, I fish for it. It’s about good time management and decisions.”

Blind fishing for bedding bass allows anglers to do more fishing and less looking. It can yield great results if you slow down, visualize the fish, and make the right presentations.