Springtime turns a man’s fancy to love; at least that’s what they try to convince us of.  Whoever came up with that statement must not have been a bass angler.  The truth is that when the season turns to springtime, a young bass angler’s fancy turns to big bass.
Not that we don’t think of big bass at other times of the year, but there really is not time like the spring to keep an angler’s interest peaked.  Any cast could produce a giant; any cast made with precision could absolutely attract the one bass we’ve sought our entire lives for. 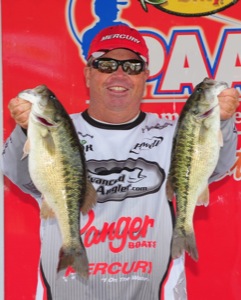 The angler who competes for a living must give himself a chance to present his lure to as many big bass as he can.  For the pro angler, a lure that covers water horizontally through the water column gives him a chance to get that strike at any moment.  There are many lures that anglers can present horizontally to catch bass in the spring; crankbaits, spinnerbaits, bladed jigs and jerkbaits all come to mind.

However, there is a time that is almost magical for another horizontal approach.  It’s when the bass are in the middle of the spawn; that time of the year when one wave has spawned, and are awaiting their return to summer haunts while another group is moving in to the spawn.  That is when a topwater bait can produce mighty stringers

For Phoenix, Ariz. pro John Murray, this is the time of the year to capitalize on the hunger of bass with a topwater bait.  “If you think about it, whether they are coming out of spawning areas, or going into them; bass are feeding,” he said.  “A topwater bait allows me to cover the water efficiently, and present a bait that will draw a big bite; because it represents a bigger potential meal.”

Choosing a Bait
Murray uses one of three lures to make bass strike, and which one he throws depends upon the area he is fishing in, and the conditions.  If he is fishing at the mouth of a creek towards the main channel or main lake, Murray prefers a cigar shaped walking bait.  However, if he is targeting areas further into the creek and a little more subtle approach is necessary, he prefers a smaller chugging style bait.

“I like a bigger walk the dog style bait to make long casts in areas that have a little more wind chop in them,” he said.  “The side to side slashing of the bait catches their attention and draws bites on the surface that another topwater bait won’t.”  His first choice is a River2Sea Rover 128, a five-inch topwater bait that has a mixture of high pitched rattles and loud knocker in the tail. 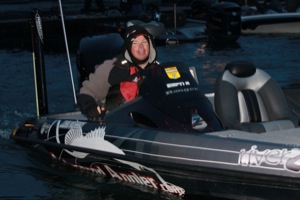 His choice for a topwater chugger; or popper, is made based on the conditions in his area as well.  If he needs a popper with a little more presence because of a steady breeze, he prefers the River2Sea Bubble Pop 88.  “The Bubble Pop series is an aggressive bait,” he said.  “It has a cupped mouth like other poppers, but has openings in the gill plate that add to the commotion of the pop and leave a bubble tail behind the lure.”

If the conditions are slick, and he is fishing in the back of spawning coves and pockets, then he turns to a Lobina Lures Rico; a subtle popper that is actually at its best when retrieved with short twitches creating a spitting action rather than a solid pop.

Where to Throw
His primary area to target is the first obvious piece of cover leading into and out of spawning bays.  If he finds a row of trees in the water, a line of docks, grass lines or even boulders immediately adjacent to the nesting area; that’s his first target.  “Before and after they spawn, bass will use the runway between the back of a cove and the first point at the mouth of the cove.  Any piece of cover that intersects with that area will be a likely holding area for the type of fish I am looking for,” said Murray.  “I start in the morning fishing the shallowest points in a cove, then turn my attention to the steeper side in the afternoon.  Shade is a big key during this time of year, any shady area around the types of features I am targeting will get a few casts with a topwater.”

After he makes a pass through the back end of the spawning cove without success, Murray will turn and work his way out towards the opening of the creek.  “Remember that there are bass in all phases of the spawn this time of the year, and there are bass everywhere,” he said.  “They’ll be early spawners on their way out, and late spawners just starting to move in, so I give them a look too.” 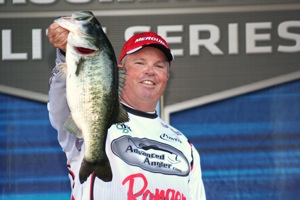 Choosing Colors
Murray lets the conditions dictate his color choices.  In clear water, he likes translucent colors, in stained water he likes solid colors, and if he is targeting areas with bluegill he likes a little flash.  “In clear water, Chartreuse Shad or Lightning Shad are my favorites,” he said. “If there is some stain to the water, then Bonez is a great choice.  “But, sometimes in the postspawn, a bait with chartreuse in it will trigger strikes, especially if there are bluegill around, so I will go with Okie Shad.”

Equipment
Murray prefers a long, limber rod for throwing topwater baits.  His first choice is a Powell 754CB Glass in all conditions.  The slow action of the fiberglass blank allows bas to take the bait deeper in their mouths when they strike.  He said that the visual nature of the topwater strike often makes an angler react too quickly, and the glass rod compensates for pulling the trigger too quickly. He pair his rod with an Ardent XS1000 with a 6.3:1 retrieve.

Line choice is made with consideration to the conditions and the cover.  “If the water is clear, I use 15-pound-test monofilament, but if there is any stain to the water, then I go to 30-pound-test braided line,” he said.  “I prefer the braided line, because I can make really long casts and have the power to set the hook, but sometimes you have to adjust for the conditions.” 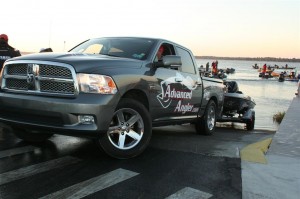 Be Methodical
Murray cautions anglers to not get ahead of themselves this time of the year. “It is important to stay off the cover and make long casts,” he said.  “It’s also important to slow down your retrieve.  Topwaters are usually used with a faster retrieve when bass are chasing shad, but this is a time to be methodical.  Bass are not typically in a mood to chase at this point, and you almost have to make them strike.”

Bass will often strike out of agitation as opposed to feeding needs this time of the year, so Murray tools his retrieve as needed.  I make a long cast towards a target and twitch it once or twice before letting it sit; absolutely still, for a long time before I move it again.  A lot of the time, they will take a swipe at it when it sits there.”

But, they will miss the lure sometimes, and if that happens, Murray said reacting quickly is important.  “I usually get the bait back fast and make another cast,” he said.  “The bass seem to think that they’ve killed the nuisance, only to have it return.  It is usually on the second cast that the try to kill it for good; and then you can get a good hook in them.”