It’s only been a few years since Brock Mosley was competing in the Carhartt Bassmaster College Series as a student at Ole Miss in Oxford, Mississippi, and cramming himself into a hotel room with Matt Lee, Jordan Lee,

and Drew Benton to save on travel expenses.

Speed ahead seven or eight years, and the former standout baseball outfielder is now a full time 30-year-old Bassmaster Elite Series pro with $200,000 in prize winnings, and he’s kicking off the 2019 season with a lure as old as he is.

“It’s an old Devil’s Horse topwater prop bait I found in my dad’s tackle box several years ago, and when you come to Florida you better have one tied on,” says Mosley.

Fact is, if you could see the front decks of all 75 pros this morning, just about every one of them has a topwater prop bait tied on. Could be a Devil’s Horse like Mosley’s, a Bagley’s Bang O Lure, Boy Howdy, or another famous variety – but in Florida this sort of floating cigar shaped lure with spinning props on its ends is as much a staple as oranges, oysters, and palm trees.

“I can’t tell you why bass love them down here, nor can I tell you why you rarely see us throw them in other parts of the country. All I know is down here it’s magical,” says Mosley, winner of the 2011 Carhartt Bassmaster Regional on the Alabama River. 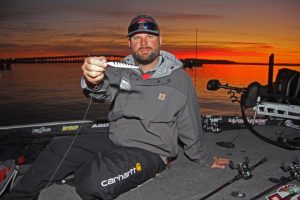 The lure is particularly effective during the spawn, and with a week of warm nights, it’s predicted that 20 to 50-percent of the bass weighed in today could come from spawning beds.

“Dad’s a wholesale car dealer that only fishes when I’m around, but when you see how well local sticks Terry Scroggins and Cliff Prince did on a topwater prop bait the last time we competed here on the St. Johns in 2016, I was real glad Dad had one in his tackle box that I could bring with me,” adds Mosley.

Mosley ties the lure to a 20-pound monofilament leader that’s connected to 50-pound braid as his main line. “Braid gives you a better hookset, but I don’t like tying the Devil’s Horse directly to braid, because sometimes braid will tear the hooks from the mouth of a big fish,” he explains.

Mosley has certainly come a long way from sharing hotel rooms with three other anglers, but here on the St. Johns River he remains directly grounded to his bass fishing roots in Collinsville, MS – mostly as a result of digging through his dad Danny’s old tackle box, and leaning on a lure this week that’s as old as he is.