MONROE-WEST MONROE, La. (Feb. 8, 2022) – Although he didn’t have as quite of good of a day as he did Sunday, pro Jared Lintner of Covington, Georgia, had enough of a cushion that it really was never close. 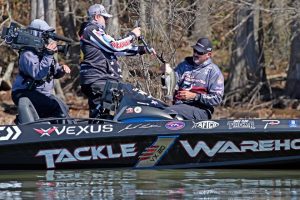 Lintner weighed in a two-day total of 11 scorable bass on Lake D’Arbonne totaling 47 pounds, 5 ounces, to cruise to a Qualifying Round win for Group B at the B&W Trailer Hitches Stage One Presented by Power-Pole in Monroe-West Monroe, Louisiana, and advance straight into the final-day Championship Round.

The remaining 38 anglers – 19 from each group – now advance to Wednesday’s Knockout Round, where weights are zeroed, and the anglers compete to finish in the top eight to advance to the Championship Round on Thursday. The Championship Round will feature Group A winner Mark Daniels Jr., Group B winner Jared Lintner, and the top eight anglers from the Knockout Round competing in a final-day shootout for the top prize of $100,000.

The six-day event, hosted by Discover Monroe-West Monroe, showcases 80 of the top professional bass-fishing anglers in the world competing for a total purse of $805,000.

“You can’t win it if you’re not in it, and I am thrilled to know that we are in it,” Lintner said in his post-game interview. “It has been a grind this week – very few bites to be had. When the fishing is tough, you have to go with what you have confidence in and that’s what I have done this week fishing the Bubba Shot.

“It wasn’t a pretty day, today,” Lintner continued. “I didn’t catch any big ones. And I really started feeling some heat from Bradley Roy in the third period, but luckily I caught enough to hold him off.”

“The Pautzke’s is making a difference,” Lintner said. “Several times throughout this first round I’d have a moment where I thought I’d feel a bite, or I’d miss one. I’d re-lather that worm up in the Fire Gel and they’d choke it.

“I’ve come close to winning several times before – and I’ve also been the guy knocked out at the last minute – so I am so happy to finally win my round,” Lintner went on to say. “I know things are going to be very different on Bussey Brake, so I’ll go back to the house and revamp everything, and I’ll be ready to go.”

After not having a scorable bass well into the third period on Sunday, VanDam caught four bass in the final 10 minutes of the day to start Tuesday in seventh place, He added four more bass Tuesday weighing 11 pounds, 12 ounces to comfortably advance to the Knockout Round in fifth place.

“The only thing that I had left was the upper end of the lake, fishing the river points and tree lines up the river,” VanDam said. “I was throwing a Strike King KVD 300 Jerkbait series and a Strike King Series 3 crankbait – crawfish, or baby carp, or Denny Brauer craw – any kind of brownish crawfish color.

“I’m moving on to Caney Lake, and that was my main goal – I wanted to start the season off strong,” VanDam went on to say. “Hopefully tomorrow we can get into that top eight and move on to the Championship Round.

The top 20 pros in Qualifying Group B that advance to Wednesday’s Knockout Round on Caney Creek are:

Overall, there were 121 scorable bass weighing 319 pounds, 1 ounce caught by 33 pros on Tuesday.

The 40 Anglers in Group A competed in their two-day qualifying round on Lake D’Arbonne Saturday and Monday – the 40 anglers in Group B on Sunday and Tuesday. With the two-day Qualifying Round now complete, the anglers that finished in 2nd through 20th place from both groups advance to Wednesday’s Knockout Round on Caney Creek Reservoir, while the winner of each group advances directly to Thursday’s Championship Round. In the Knockout Round weights are zeroed, and the remaining 38 anglers compete to finish in the top 8 to advance to the Championship Round on Bussey Brake. In the final day Championship Round weights are zeroed and the highest one-day total wins the top prize of $100,000.

The 38 anglers competing in the Knockout Round will launch Wednesday at 8:30 a.m. from Caney Creek Hooks Marina, located at 400 Spillway Road in Chatham, Louisiana. Thursday’s final day Championship Round on Bussey Brake will launch at 8:30 a.m. from Bonner Ferry Road, five miles northwest of Bastrop off of Hwy 593.