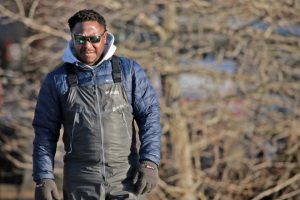 The six-day event, hosted by Discover Monroe-West Monroe, showcases 80 of the top professional bass-fishing anglers in the world competing for a purse of $805,000, including a top cash prize of $100,000 to the winner.

“To be honest, I was really looking forward to going to Caney Creek, but I’m even happier now that I’m going straight to Bussey Brake with an opportunity to win this thing,” Daniels said in his post-game interview. “The automatic top-10 berth makes it an already awesome week and I could not be any happier with how this round went.”

Daniels dominated early Monday, catching five scorable bass on a jerkbait before 10 a.m. Seven of his eight keepers came on the jerkbait – he also added one in the afternoon on a ¼-ounce Bill Lewis Rat-L-Trap.

“That ¼ ounce Trap is a little sneaky – not a lot of people throw it,” Daniels said. “Most of the time I’m throwing it trying to match the bait, but I’m throwing it this week because I’m targeting that 1-to-3-foot depth.

“I’m throwing the jerkbait on my 6-foot, 8-inch Favorite Pro Series casting rod,” Daniels continued. “It’s a little bit shorter and allows me to impart a good action on the bait without slapping the water, which happens to me with a longer rod. I’m throwing the Trap on a 6-foot, 10-inch Favorite Signature B-Lat Sick Stick with a 6:8:1 gear ratio reel and 12-pound Seaguar Fluorcarbon line.”

With Daniels now advancing to the Championship Round for the fifth time in his career, he’ll be looking to earn his first career victory on Thursday.

“I’m looking forward to spending a little bit of time scouting Bussey Brake on my day off. It’s been a grinder, but I’m super grateful to make the Championship Round. I’ve got a shot and I can’t ask for anything else – that’s why I’m here.”

The top 20 anglers from Group A will now enjoy an off day, while the 40 anglers in Qualifying Group B will complete their two-day Qualifying Round of competition on Tuesday. The Knockout Round, featuring 38 anglers competing to finish in the top eight, will take place Wednesday on Caney Creek. Thursday’s Championship Round on Bussey Brake will feature Thrift, Tuesday’s Group B winner, and the top eight anglers from the Knockout Round competing in a final-day shootout for the top prize of $100,000.

The top 20 pros in Qualifying Group A that now advance to Wednesday’s Knockout Round on Caney Creek Reservoir are:

The 40 Anglers in Group A competed in their two-day qualifying round on Lake D’Arbonne on Saturday and Monday – the 40 anglers in Group B on Sunday and Tuesday. After each two-day Qualifying Round is complete, the anglers that finish in 2nd through 20th place from both groups advance to Wednesday’s Knockout Round on Caney Creek Reservoir, while the winner of each group advances directly to Thursday’s Championship Round. In the Knockout Round, weights are zeroed and the remaining 38 anglers compete to finish in the top 8 to advance to the Championship Round on Bussey Brake. In the final day Championship Round, weights are zeroed and the highest one-day total wins the top prize of $100,000.