I just finished a five-day ice-fishing-fest, what’s new? I actually did catch a giant though, a 16 ¾, 2 pounds 14 ounce slab, not as big as the ice fishing world record I caught several years ago at 3.8 lbs, but not too bad.

Everything’s been shut down for the holidays and this week has been crazy finalizing things, at least I hope. Both Mitchell and Macy got sick with colds, then Anne got it, and now I’m dealing with it this morning of course. So I probably won’t be out on the ice anytime soon, but that’s probably good because I have a lot of catching up to do. 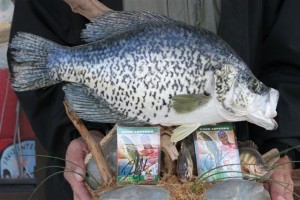 I’m not used to announcing new sponsors since I’ve had basically the same ones since I started fishing, but I do have a couple that I can let you in on right now.

First, I teamed up with Gary Dobyns and his fairly new rod company. He’s obviously been in the rod designing and rod building business for a long time, but he finally decided to put his name on some high quality sticks. He’s been building his own business for a couple years now and I couldn’t be more excited to be associated with him and his exceptionally “fanatical” approach about rod building.

He’s like a little kid on the phone, talking about graphite and components and things I’ve never heard of, but his enthusiastic attitude is contagious for sure. We need to get these bad boys moving out here in the East, and believe me when anglers get their hands around these rods they will be sold without a doubt.

I will also be running a pair of Power-Poles on my Z-521 for the first time. It was obvious that I was at a disadvantage at times without them the last couple years, so I am anxious to put them to use at Okeechobee, our first event of the season. I will also be putting a small four-footer on my little flats boat so that will be quite cool.

My title sponsor is not yet ready to be announced, but it has been fun helping design my own wraps and jersey for 2011. Everything except the Suburban wrap was submitted today and the truck will be finished tomorrow hopefully. I really like the way it all turned out so far and I can’t wait to show everyone soon.

I also made a decision to stick with the Yamaha SHO for 2011. That may come as a shock to some, but to make a super long and complicated story short, I simply couldn’t see throwing away 10 years on such short notice, loyalty is big with me. Who knows what will happen next season, but for now I’m sticking with them as long as I can.

I don’t agree with how they handled everything with FLW, but then again I don’t know the entire story. It’s a great motor and I like most of the people who I’ve known for many years who work there. I’m sacrificing now obviously, but hopefully it will pay off later, who knows?

I picked up our 5th wheel camper today from the dealership. It has been there ever since the big snow over a month ago, but the snow was too deep to pick it up. We will begin packing to leave soon, and are beginning to get excited about hitting the road and heading south.

Until then, I will be in search of the next World Record Crappie on the ice and watching the Steelers in the playoffs. Happy New Year everybody!