10/24/2011 – This week marks the fifth annual Toyota Texas Bass Classic at Lake Conroe, outside Houston. Being that this is the fifth year of what has become one of the most anticipated events by the anglers, fans and media throughout the country, we though a look back to the origins of the event was warranted.

The TTBC was conceptualized as a unique way to accomplish several goals. In the previous four years of the event, the TTBC has generated donations for youth fishing initiatives, exposed the quality of Texas’ bass fishing to the world, entertained thousands of fans and created a venue for the sport’s best anglers to compete; no matter their main league of regular competition.

The event has gone through its own series of evolutions throughout its four-year history, but it still stands as one of the premier bass fishing events in the country. It is the result of collaboration between several different organizations who all work to put on the show. 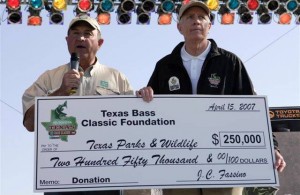 The work of Gulf States Toyota, The Texas Bass Classic Foundation, Octagon, Texas Parks and Wildlife Department, The Professional Anglers Association and the municipalities that have hosted the event make up the team the produces the show.

But, how did the event come to fruition? We sought out the sources to find out the back story behind the birth of the TTBC, spoke to some of those who continue to operate it today, and one of the anglers who won the inaugural event in 2007. The answer to the Genesis of the event begins with Bassmaster Elite Series pro Kelly Jordon.

Show it Off!
Jordon, now a resident of Palestine, Tex. with his wife and daughter, is a self proclaimed “Texas Homer.” His passion for his home state and the famed Lake Fork on which he cut his bass fishing teeth made him want to show it off. “I had always wanted to fish a tournament on Lake Fork, but the slot limit makes it almost impossible to do that,” he said. “I wanted to see Lake Fork show off how good it could be to the rest of the country.”

When he met Donato Ramos while at a friend’s deer hunting lease, the potential was set in motion. Ramos was a commissioner with the Texas Parks and Wildlife Department, and when his son recognized Jordon and his wrapped truck, the two struck up a conversation that led to Jordon having dinner at the Ramos’ Ranch.

They decided to go fishing on Lake Fork, and took Ramos’ son and during that fishing trip, the topic of a Lake Fork tournament came up. “To make a long story short, Donato and Dan Friedkin helped push things along and helped us get the meetings that would lead to the event,” he said. “Those are the real heroes of the TTBC.”

Enter the PAA
Jordon was able to arrange a meeting with Phil Durocher and Dave Terre of the TPWD. The meeting also included Mike Auten, a board member of the PAA and Gene Ellison; the organization’s Executive Director. The representatives left that meeting charged with putting together a proposal that would keep the tournament operating under the fish care rules of Lake Fork.

Ellison, Auten and the PAA Board began working on the proposal, and for the next six to nine months would spend exhaustive hours working back and forth with TPWD to build the format of the event. Ellison said that he is truly proud of the event because it was new and revolutionary in its operation.

“The first TTBC paired 160 of the best anglers in the world into four man teams,” he said. “The whole format had so many different features and ideas that it became one of the most unique bass tournaments in the world.”
The event included the four man teams broken into two shifts for the first two days of the event. When the first shift was over, the afternoon team would be waiting in their designated meeting place in the strategy session area. The teams would share information, waypoints and techniques.

Because of the slot limit, each team carried a judge in their boat who would weigh, catalog and report the weight with the control center. The event also featured live scoring that allowed the media and spectators to keep track of their favorite teams each time they caught a fish. The event was also the first to offer a total $1million payout with no entry fees to the participants.

“I was really proud to be a part of such an innovative and enjoyable event,” said Ellison. “I was getting calls from the anglers for weeks afterward talking about how much they enjoyed it.”

Winning Team
The winning team of the 2007 TTBC was captained by Terry Scroggins, his teammates were James Niggemeyer, Frank Ippoliti and Chris Daves. The team amassed a total of 244 pounds, 12 ounces over the three day event, and they ran away with the $250,000 first prize. 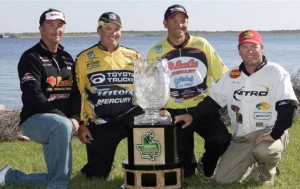 Niggemeyer recalled how much he enjoyed the format. “It was really great to work with these guys and truly collaborate in finding and catching bass,” he said. “The teamwork was amazing, but it was also the first place that I truly felt like a professional athlete. They really laid out the red carpet for us.”

As far as the fishing went, Niggemeyer said that team captain Scroggins located a group of fish that was full of heavyweights. The spot was an offshore location that held some interesting bottom features and timber, along with baitfish. “We were catching them on deep diving crankbaits, but we had to line up very specifically,” he said. “Terry (Scroggins) showed us all the line in our strategy session and we all took our turns producing big bags.”

Niggemeyer’s fond recollections don’t stop on the water. “It felt great to win, of course, but to be a part of a team that worked together so effectively was really rewarding,” he said. “I really think it was the coolest concept I’ve been a part of in fishing tournaments.”

Festival Atmosphere
Along with a professional fishing event, the plan was to build a festival type atmosphere around the tournament. As one would expect Texas to do, they put it on big, and invited popular country music acts to perform a concert at the end of the final weigh-in. Acts that performed at the event were Clay Walker,
Tracy Lawrence, Kacey Musgraves, Zona Jones, Danielle Peck and Todd Fritsch.
JC Fassino, President of the Texas Bass Classic Foundation said the event is all about showing the best of what Texas has to offer. “The TTBC was set up to build a festival type atmosphere around our great Texas Fisheries,” he said.

“We wanted people to be entertained, and we wanted to help along the way.”
One of the main functions of the TTBC is to raise funds for the Texas Parks and Wildlife Youth Fishing Programs. The TTBC and Toyota along with Gulf Stats Toyota; the exclusive distributor of Toyota products around the Gulf worked to make a $250,000 donation to TPWD.

“The Texas Bass Classic Foundation has reached our goal in each of the last four years,” he said. “The event has evolved and the venue has changed, but the goals are the same. We want to educate consumers to Texas Outdoors Resources and work to improve fisheries and fishing opportunities along the way.”

He also said that they had a goal of changing the tournament mindset while at Lake Fork. “The TTBC helped change the paradigm of how tournaments could be run,” he said. “We showed that you could care for the resources, put on a great event and give the fishing world a unified Champion along the way.

“Dan Friedkin has been unwavering in his support of the TTBC, and it has been a real entertaining and enjoyable thing to be a part of,” he said. “We are proud to be going into our fifth year with the TTBC, and we just keep hoping for more of it in the future.”

For details about the history and for info about this year’s event, visit http://toyotatexasbassclassic.com