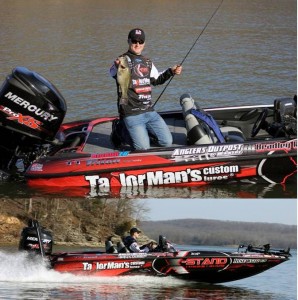 Reidsville, NC— Bradley Roy of Lancaster, Kentucky has locked in the top spot on Taylor Man’s Custom Lures Pro Angler roster for 2013. Roy, now in his fourth year of Elite Series competition, was the youngest angler ever to have competed at the Elite level, claiming the Bassmaster Elite Series Rookie of the Year title in 2010.

Roy said, “I’ve relied on Taylor Man’s Custom Lures for years, so I’m tickled to work with them again this season.  They are always looking for new ways to help fishermen catch more fish on jigs and wire baits.”

Taylor Man’s Custom Lures president James Huskey said he sponsors Roy not only for his fishing skills but also for his character and honesty. “Bradley consistently produces on the water and tournament anglers pay attention to what he’s using. He absolutely refuses to use a jig or wire bait if it’s not the right tool for the job, and we’re honored that he has used Taylor Man’s since his first-ever Elite Series event.”

Taylor Man’s always has new products under development which can be seen at www.tmclures.com and on their Facebook page – www.facebook.com/tmclures.

Taylor Man’s Custom Lures manufactures and sales premium, high-performance fishing lures. Their jigs, spinnerbaits and buzzbaits, are made in America’s heartland, were conceived on the lakes and reservoirs of North Carolina and have been honed and tournament-tested on lakes and rivers around the world. Learn more about Taylor Man’s Custom Lures at www.tmclures.com or call 336-669-5395.

Bradley Roy is the youngest angler ever to compete at the Elite Series level.  Follow him through his website, www.BradleyRoy.com, and at www.facebook.com/ProBradleyRoy.