For anglers across the country, the pre-spawn can be a time for covering water, trying to find out fish coming out of the winter doldrums and headed to key spawning areas. On grassy flats throughout the south, the typical strategy is to tie on a lipless crankbait or a heavy spinnerbait and get to work. At the same time, though, Louisiana pro Dennis Tietje knows that the best bite this time of year often comes when he can fish in a “target specific” fashion.

“That target could be anything from a stump to an inside grassline point to visible trees and logs,” he said. “In the springtime the bass are going to relate to something versus rambling around chasing baitfish. I’ve learned to spend a lot of time looking for key spots in big areas.” 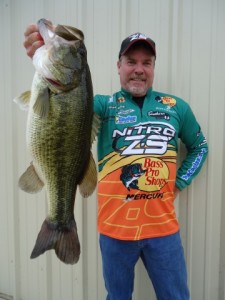 While Toledo Bend may be his adopted home lake, Tietje learned to fish on the marshes and bayous of south Louisiana. They’re loaded with vegetation, and the corners of visible grass produce lots of fish, but one of his favorite types of cover this time of year is the kneed cypress trees that litter those waters.

“Dissecting them can be tricky,” he said. “What I’ve found is that if you find a group of a lot of trees they’re not nearly as productive as if they’re alone or in groups of two. They’re almost always better if they don’t have giant knees. I’m not saying that you won’t catch fish out of them in those situations, but that’s typically the case.”

The particular areas that he focuses on depend on what portion of the spawn the fish have entered. When they first move in from their winter haunts, they’ll stage on the first trees available, those located on points or near deep water. As the season, progresses, thought, they’ll move to slack water areas that offer more protection for their nests. The transition “doesn’t take long,” he cautioned.

Once he’s narrowed down a general area, he’ll try to find particular trees that are more likely than others to have fish spawning on or near them. That usually involves finding a second type of cover growing in that same vicinity. “More than depth changes, I’m looking for trees with cane growing on the base of the tree or limbs hanging into the water,” he said. “Anything broken at the base of the tree is always a trigger point for me. If you find wind-blown grass up against the base, or with limbs holding it away, that’s a key area for big bites.”

Crawfish will be around those same trees eating algae. “That’s their main food source and their protection as well,” Tietje explained. “Plus it warms up quickly.” Accordingly, he’ll start with green pumpkin colored Bass Kandi Speed Bug, a soft plastic craw imitator with big pinchers. In slightly clearer water he may use watermelon instead. Later in the year, he’ll move toward baits with more red in them. “The best rule of thumb is that when you heat them up in a pot, they turn red or orange,” said the former crawfish farmer. “It’s the same in the rivers and lakes. The hotter the water gets, the redder they get.” In addition, he said some sort of noisemaker, like a glass bead between his weight and his hook, is critical, especially in stained to muddy water. That’s because hesitation is a key part of his presentation this time of year.

“If you’ve ever watched a crawfish swim, when it comes into contact with something hard it becomes almost lifeless and swims to the bottom,” he said. “They may take off again, but they fall first. Stay in contact with your bait and when you feel it hit anything, pause and let it fall to the bottom.” 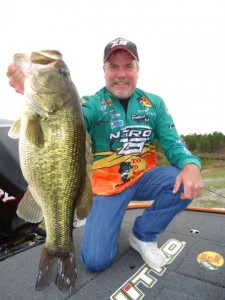 He may also use a spinnerbait or a Rat-L-Trap, but even then he’ll let it dart, dance and fall at key junctions.

As the fish fully commit to their bedding areas, his periods of hesitation will become even longer.

“At that point, it becomes a game of patience between the fisherman and the fish,” he said. “Leave it in there. If you think you’ve left it long enough, leave it twice as long. It’s hard to do, but that’s how you win.”

“If you see a target, don’t throw right at it,” he said. “Throw past it and bring it toward the target. Once you come to it, you’ve got to hesitate. Fish are trained to run baits off this time of the year. If you swim it by without stopping, you’ve done it for them.