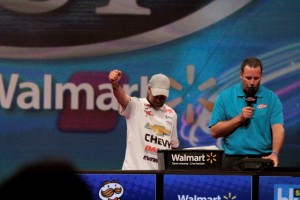 SHREVEPORT, La. (Aug. 17, 2013) – Chevy pro Bryan Thrift of Shelby, N.C., brought a five-bass limit to the scales weighing 9 pounds, 15 ounces to lead day three of the Forrest Wood Cup at the Red River presented by Walmart. Thrift, with a three-day total of 15 bass for 39-6, holds a 4-ounce lead over previous leader EverStart pro Randall Tharp of Port St. Joe, Fla., who weighed five bass weighing 9-7 for a three-day total of 15 bass for 39-2. The Forrest Wood Cup, professional bass fishing’s world championship, features 46 of the best professional anglers from across the country casting for the top cash award of $500,000.

“Well, I’d rather have the lead then be in second,” said Thrift, who finished in third place at the 2012 Forrest Wood Cup. “It’s still anybody’s game, though. Somebody in sixth or seventh could go out tomorrow and try something off the wall and catch 18 pounds like Randall and I did on the first day and win this thing. The river is capable of producing those type of weights, so I really don’t believe that anybody is out of this.”

Thrift said that despite taking the lead, he struggled for most of the day. He estimated that he only had eight or nine keeper bites throughout the day, and four were barely over the 12-inch mark.

“I tried to find places in practice where I could get multiple bites, but they’re slowly fading away,” Thrift said. “The places where I was getting three or four bites each day are now only getting me one, sometimes none. Today I fished around 40 to 50 different places. I’ve been fishing woods, pads, rocks – anything that looks good. I’m just putting the trolling motor down and covering water.”

Despite running and gunning, Thrift said that all of his big fish have come from the same area.

“I’ve caught my big fish each day off of this little point in a backwater area,” said Thrift. “They all came on an Evercast Lures Shaky Head rigged with a 6½-inch Damiki Finesse Miki Worm. I’ve also been catching fish on an original Z-Man Chatterbait.

“Tomorrow I’m going to do the same deal,” Thrift went on to say. “If it’s not working, I’ll do something else. I’m not going to get stale in my approach and go down dying with one thing. If I’m not getting bit, I’ll change it up and try to make them bite something else. I think I’m most likely going to have to run some new water tomorrow. I’m going to fish what I feel like is going to give me the best chance to catch a big one and win this tournament.”

The 2013 Forrest Wood Cup at the Red River presented by Walmart is being hosted by the Shreveport/Bossier City Sports Commission.

Fans will be treated to the FLW Expo at the Shreveport Convention Center located at 400 Caddo St. in Shreveport, La., on Sunday from 10 a.m.-4:30 p.m. prior to the weigh-ins. The Expo includes Ranger boat simulators, the opportunity to interact with professional anglers, enjoy interactive games, activities and giveaways provided by sponsors, and fans can learn more about the sport of fishing and other outdoor activities. All activities are free and open to the public. Five-hundred free rods and reels will be given away each day to the first 500 children 14 years and under who are accompanied by an adult. The rod and reel giveaways are courtesy of 1130 AM The Tiger. Also on Sunday, one lucky fishing fan will win a Ranger Z520C with a Mercury outboard. The Ranger boat giveaway is courtesy of KSLA News 12 and is free to enter, but the winner must be present at the conclusion of Sunday’s final weigh-in to win.

Coverage of the Forrest Wood Cup will be broadcast in high-definition (HD) on NBC when “FLW” airs Sept. 29 from 2:30-3:30 p.m. ET. The Emmy-nominated “FLW” television show is hosted by Jason Harper and is broadcast to more than 564 million households worldwide, making it the most widely distributed weekly outdoors-sports television show in the world.

FLW and the Capital City, Lake Murray Country Regional Tourism Board announced Friday that Columbia, S.C., would once again be hosting the Forrest Wood Cup, the world championship of bass fishing, Aug. 14-17, 2014, on the jewel of South Carolina, Lake Murray. The last time the Forrest Wood Cup, the sport’s premier event, was held in Columbia was 2008.

Rayovac pro Jason Christie of Park Hill, Okla., was awarded the second annual Forrest L. Wood Sportsmanship and Community Leadership Award on Saturday, and a donation will be made to Christie’s charity of choice. FLW recognized the angler that exemplified the ideals of sportsmanship and community service throughout the 2013 season. The Forrest L. Wood Sportsmanship and Community Leadership Award recognizes the individual who displayed overall commitment of sportsmanship and community leadership, on and off the water, by displaying ethical behavior, upholding integrity, class, selflessness, conservation efforts and kindness to others.