John Murray is fishing junkie. He loves to fish tournaments and anything that makes his life easier in those events is something he gravitates towards. 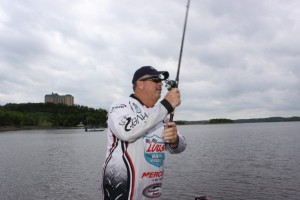 In the springtime, when bass are headed to the beds, on them or heading away from them, finding where they are holding can be a critical component of being successful. “Bass can be really goofy around the spawn,” said Murray. “They can be extremely aggressive, but they can also be very hard to catch because they get stressed with spawning and high pressure.”

Murray said the trick he has used for years is to toss a topwater lure or a swimbait over spawning areas, but he said he has a found a new tool; theRiver2Sea S Waver. The S Waver is a single jointed hard bodied swimbait that swims in a side to side gliding action known as an “S Action,” hence the name.

Murray said he has learned that the lure has tremendous drawing power for bass. “I’ve caught smallies and largemouth on it, but I haven’t fished any spotted bass lakes with it yet,” he said. “I know it works on them to, but I don’t just use it to catch fish, it is a great search bait as well.”
Here is when and how he employs the lure.

For the Catch
Murray said the best time to fish the S Waver as a fish catching tool is when there is some visibility in the water and some bigger bait is nearby. “I use them when there are trout present in lakes, when the Hitch are running at Clear Lake or when the Gizzard Shad are running all over the country,” he said. “The bigger size of the bait really matches the kind of baitfish that quality bass eat.”

Murray said that he prefers to use them when fish are shallow, or when they are suspended. “It really is a great lure down to about six feet,” he said. “but, if the bass are suspended off of bluffs or over main lake points, I will throw it then as well.” 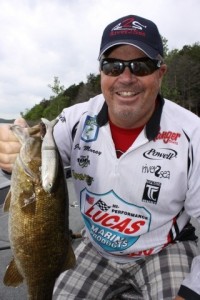 He said he uses a steady, medium speed cadence to allow the lure to glide back and forth. He said there is no reason to do anything but retrieve, that the lure takes care of the action. However, he said that a stop and go retrieve, or even a slight twitch of the rod tip can make a huge difference.

“It has great dying baitfish action, and it really gets a lot of attention,” he said. “But a twitch or two never hurts anything.”

For the Search
Murray said the S Waver has become his favorite shallow water practice tool. “I use it to make fish show themselves to me,” he said. “There are times that just knowing where they are is half the battle, and this thing gets so much attention, that it makes it easier to locate big fish.”

When he is using it as a practice search lure, Murray said that he usually removes the hooks from the lure to avoid catching bass on it that strike in scouting. “They will usually just come in for a look, but sometimes they can’t help themselves,” he said. “I don’t want to catch them in practice, so I remove the hooks.”

When Worlds Collide
Once the tournament begins, the S Waver will be a lure he uses between areas that he has located bass, and he often picks off an extra fish or two during an event thanks to the action. “It’s kind of become my replacement bait for tough topwater times,” he said. “there are times that they won’t come all the way up to eat a topwater bait, but they’ll get this one just under the surface.”

He said that he classifies the S Waver as a swimbait, and said that it an excellent way for anglers who fear a big swimbait being too much for their lake. “Many people see a seven or eight-inch swimmer as too big for their lake,” he said. “But this is the perfect size to allow anglers to learn to use a swimbait. It is easy to fish, and really effective.”

Equipment
Murray throws his S Waver on a Powell Endurance 764; a 7’6″ medium-heavy action rod with a nice tip and strong backbone. he said he prefers to use 20-pound-test Fluorocarbon spooled on an Ardent Edge Elite reel with a 6.5:1 retrieve speed. 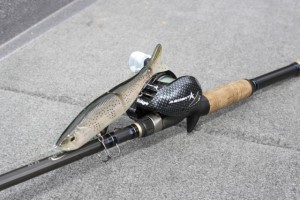 “The combo allows me to make decent casts, and allows me to cover water and have the leverage to fight fish once they’re hooked,” he said. “It’s the perfect action for this bait.”

Urge to Experiment
Murray wanted anglers to know that this swimbait is one for all areas of the country. “So many people I hear are afraid of throwing swimbaits because they think they are too large for their area,” he said. “But when you travel the country like I do, and see the size of the baitfish in these lakes; swimbaits are going to get bites.

“Baits like the S Waver, at just over six inches, are not really any bigger than a Rover or a Spook, and can be even more effective,” he said. “They are a great way to find fish and catch bass, anglers just need to give them a try and see how easy it really is.”