Beyond the Pond – Amy Murray

Three years ago last Tuesday, wedding bells rang for John and Amy Murray. The official honeymoon could be said to be over; but as noted in the quote by Henry Ford, coming together is only the beginning, the Murray’s story of keeping together and working together is the true vision of their success. 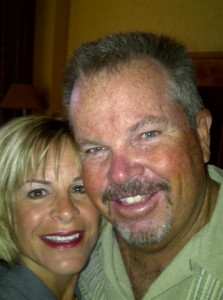 With three years of marriage under her belt and a two-year-old rounding out the Murray trio, the wife of Bassmaster Elite Series pro John Murray took a look at the life-changing events that she had experienced over the past few years. “Learning to be a partner, learning to come together has been one of the biggest changes of my life,” reflected the newly touring wife.

A lot had changed for her throughout the past six years. A fairly recent Arizona transplant, Amy had taken a solo journey west from Illinois in 2005. She gave up a career and exchanged it for adventure in a new setting, with a warm Summer.

Her move set a plan in motion that would lead Amy to her life as John’s partner. She began rooming/house-sitting with/for a fellow touring fisherman Gabe Bolivar. She recalled the events, “My first year out here was a good year, I got a nearby job and Gabe introduced me to John at a party. We kept in contact; we ended up dating and knew we were serious, so we decided to try to get pregnant. Well, it happened on the first try and in September we were married and in March Thomas John (T.J.) was born.”

Explaining that her family back in Illinois wasn’t immediately celebrating all the changes that followed her move, Amy remembered the list of questions that ensued, “You’re pregnant; you’re married; when are you going to get a job; when is John going to get a job?” Taking their initial reaction in stride, she said, “Ultimately, marriage is between two people.”

As T.J. made his appearance on the scene, the Murray’s continued their life together – but apart – as John continued to follow the Elite Series schedule, and Amy continued the career she began upon her arrival to Arizona as the District Manager of an acoustical company. “It felt like we were married, but separate; and the baby changed it all. I knew I didn’t want to do it on my own; but it seemed like it was all me and we could see that needed to change,” Amy explained. 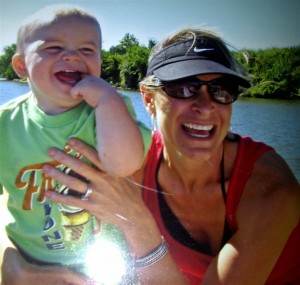 Discussing their options the Murrays came to a decision…

They said… together is the place you oughtta be; so, creating their own version of the “Bass Tour Hillbillies,” they loaded up the truck and became a touring family.

Her biggest reluctance was leaving her work, her steady paycheck. She explained, “Having a job, always paying your bills, knowing you have healthcare, it is security; but now the focus is different and we have more fun being a family, we have common goals every day, it is more beneficial.”

When the decision was made and their travel vehicle was purchased, a good sign was bestowed on the Murrays. A symbol welcoming Amy to life on the road was handed down by fate, divine intervention or a random act of the DMV, when a non-personalized license plate arrived for their new motor home that bore her name… AMY8895.

License plate affixed, the adventure began and with her freshman year on the road behind her she looked back, “As a rookie on the road, it was a great experience. I learned so much and mostly the fact that this change has given me the opportunity to grow a part of me that I never had a chance to grow. I have always done ‘career’, I have never done ‘family’. This gives me that chance. If I wanted I could go back to a career, I could; once this family time is gone…it is gone, there is no going back.” 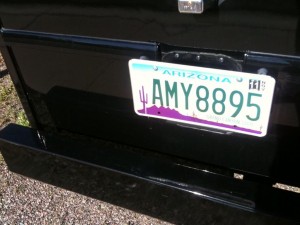 Sharing that she always enjoyed traveling and once again showing her adventurous spirit, Amy said, “I am kind of like a gypsy in that way, I love going to new places, I even love showing up at new campsites, I love being on tour.”

She continued saying, “Being together has made all the difference for us as a family, John is so much more relaxed, we eat dinner together and he sees T.J. every day.”

While becoming a traveling family has been a very positive experience for the Murrays, Amy didn’t downplay the enormous adjustment, “It really has been the biggest change of my life, us being partners in this way. I took me at least a month and a half to get used to it; but once you jump off the building, God always catches you and I wouldn’t have known what was in store for me, if I didn’t take the chance. You never know what God will fill your heart with, unless you let him.”

With many years of business practice and management skills as part of her background, there are numerous hats Amy could wear within the Murray bass fishing venture that she could excel at. She is considering more involvement with sponsors or other undertakings that will relieve John of some of his non-fishing responsibilities.

As they set off on their second year on the road, she feels her direction will become more clear. “I am just stepping into my role where I can be a bigger part of our business and figure out where my passion lies in that new role. I am out here for my family and we are a team.” 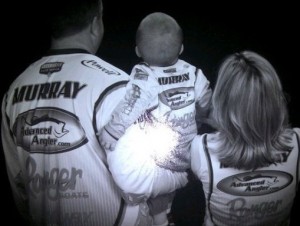 The road-tripping life in the bass fishing business was the beginning of bringing the Murray’s together as a travel family. Their desire for their family togetherness will keep their progress growing and their obvious teamwork can only breed their success.

Amy recommends traveling together to others and advises people to keep in mind that the grass isn’t always greener on the other side; “Mind your own grass and enjoy the moments.”