As summer comes to a close, the water begins to cool bass leave their deep water haunts to follow baitfish into the shallower water. This is a time where fish are feeding and vulnerable, especially if you are using the right presentation.

B.A.S.S. Elite Series Pro, Randy Howell will fish dozens of techniques during the fall, the three he focuses on most are shallow crankbaits, buzzbaits and spinnerbaits. However, if you say “fall fishing” around Howell the first thing that comes to his mind, shallow water cranking. 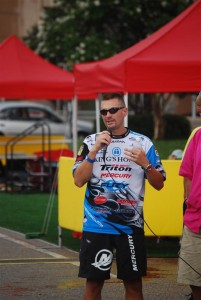 According to Howell, “80-percent of my effective fishing in the fall is done with shallow crankbaits in depths from one to six feet.”

He recommends using a super shallow running crankbait like the Molix Sculpo Super Shallow along with a slightly deeper diving bait like the Molix Sculpo Shallow Runner to target both depth zones of the water column. Howell sticks with shad color lures while fishing moderately stained to clear water like Molix’s Purple Albino Shad and Gibel color, while opting for MX Ayu, a color with a chartreuse tint, in stained water.

When fishing shallow water crankbaits, Howell uses a faster gear ratio reel opting for a 7.3:1 Daiwa Type-R Zillion. The faster reel allows him to cover more water when fishing shallow crankbaits, looking for reaction strikes when the bait hits cover and deflects. “The bait is most effective when it ricochets off something like rock, stumps, dock pilings,” explained Howell.

Shallow crankbaits are not the only baits in Howell’s arsenal in the fall. When there are shallow flats full of cover, debris, trees, rocks, or grass and shad or other baitfish he’ll opt for a buzzbait. “The buzzbait is one of the best reaction baits you can throw,” explained Howell. “In the fall, there can be so many baitfish that you need something to get the fish to strike. That’s where the buzzbait bait really shines because the fish will react to it even when they aren’t in a feeding mode.”

His favorite buzzbait for clear water is a Lunker Lure in black with a black blade. For stained water, he’ll opt for the chartreuse and white Lunker Lure buzzbait with a gold blade. “The buzzbait is very effective bait to work over cover and the fish will hit it pretty quick most of the time making it a good bait to cover water with,” Howell stated.

Howell suggests another wire bait when the cover gets thick. “When the fish move into cover that is too thick to fish a crankbait effectively, I’ll switch to a spinnerbait. In the fall. I throw a 3/8 to 1/2 ounce Lunker Lure Hawg Caller spinnerbait in chartreuse and white with a Colorado/willow leaf blade combination.

Reservoirs
On large reservoirs Howell looks for the largest creeks on the lakes to start fishing. “In the bigger creeks there are native fish that will move back into the creek to feed on shad. The main lake fish will take longer for this migration.”

Within the creek, he begins about a third or a half of the way back into the creek and starts breaking down the habitat looking for main points that are flat. “I look for a flat contour instead of steep contour because that’s where the bait fish roam and the bass can school and push the baitfish up onto flat shoreline to feed.” 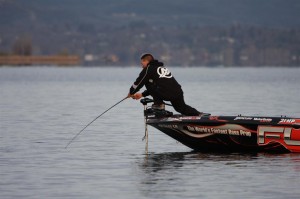 Howell warns, “Don’t get very specific when fishing points in the fall; the fish are often roaming and can be caught off of shorelines adjacent to the points. Spread your casts around. Sometimes, you’ll fish a point that looks great and catch nothing, than 50 yards down the bank on a no-nothing bank you’ll catch fish.”

One point Howell can’t stress enough is to locate the baitfish. Do this by watching the water for visible signs of shad; during the fall, locating bait is the key to finding the fish.

The main thing that Howell looks for when using shallow crankbaits is cover on or near points. To fish them successfully the bait should be hitting cover whether they are scattered rocks, stumps, or submerged wood. Howell suggests feeling for and bumping the cover making multiple casts to it and then making notes on its location or marking it with a waypoint, because as the fish roam in the fall, areas will recover and replenish.

Another thing to take into account is that fish will be more productive at certain times of the day than others. This will vary lake to lake, however, in the early fall, especially in the South East, the morning is not as good as in the afternoon. In September, it can still be hot but the water temps are beginning to cool thus the morning bite will be good for the first hour. Then the bite will die down before it picks back up in the mid afternoon when the fish get more active and easier to catch. Therefore, if you are fishing on limited time, Howell recommends fishing in the late afternoon this time of year.

Rivers
On River systems fish will have similar patterns to those on reservoirs, however, instead of focusing on points fish will find small pockets, oxbows, tributaries, bars, and flats that dead end. They’ll use these areas to chase shad into and feed. In rivers that don’t have a lot of backwaters, Howell fishes main river flats. He finds that flats are the keys to finding baitfish because when the bass are pushing fish they are typically pushing them across flat surfaces opposed to steep banks. When posed with these conditions he uses a shallow crankbait or sometimes a lipless crankbait in chrome and blue to catch bass schooling after baitfish. 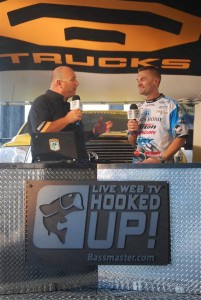 When throwing spinnerbaits Howell uses a 3/8 or 1/2-ounce Hawg Caller in chartreuse and white. He opts for a Colorado/willow leaf blade combination on his fall spinnerbaits.

Whether fishing your favorite lake or river, shallow crankbaits are a must have for your tackle box. As Howell explained, they are an effective technique whenever bass are feeding shallow on shad and other baitfish. A buzzbait and spinnerbait can be used to catch bass that are in locations that cannot be fished with a crankbait. As Howell put it, “Don’t forget to pick up some Molix Sciulpo Super Shallow and Molix Scalpo Shallow Runner crankbaits and hold on!”