story by Jody Only

“Shuffle up and deal. ~ Famous line given to tournament directors to ignite play in a poker tournament. 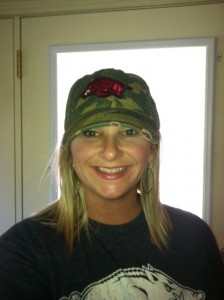 For the McClelland’s there could be two Super Bowl type events on the horizon. For Bassmaster Elite Series pro a Mike McClelland, his passion and dream of a life as a pro bass fisherman takes him on the trip to earn his way in the Bassmaster Classic each year; and ultimately the desire for a Classic championship. While his wife Stacy McClelland will be behind him as his number one cheerleader at his “Super Bowl”, she has her own plans to celebrate if her husband was to rack up a Classic victory. “If Mike wins a Classic, I already told him I would want to put down the money and see what I could do at the World Series of Poker.” It would be a double dream day for the couple.

Although she had never gambled before, Mrs. McClelland had her first experience in Las Vegas on the couple’s honeymoon, nearly a decade ago. After a proposal following a viewing of the movie Meet Joe Black, McClelland turned off the video and popped the question. The future Mrs. McClelland said yes and the couple wed in front of family and a small group of friends in the First Baptist Church they had both been to as youngsters. She was then whisked away on a surprise honeymoon to the desert.

Each from previous marriages with children of their own, it was the beginning of their new blended family, a bass angling business and a life that Mrs. McClelland had never dreamt of. “It isn’t what I expected,” she explained. “It is a different life; but it works for us. Sometimes things happen and you realize it was just meant to be and you’re not always in charge. We are celebrating ten years, this year and we will see how many more the good Lord has in store for us.”

Explaining that after her divorce, she had alternate plans for her next relationship, Mrs. McClelland said, “I thought I would go for a tall, dark and handsome guy with money and then I met Mike. He’s not tall or dark; but to me he was handsome and I surely didn’t marry him for the money; he lived in a double-wide trailer.” 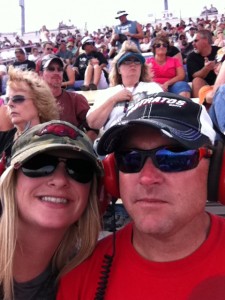 Sometimes the best treasures in life come in unexpected packages and Mrs. McClelland found that when she found her husband and he didn’t fit the bill she had planned for her next beau. “It may sound hokey or you may have heard it before; but when I found Mike I found my best friend,” she remarked. “He is such a good person, he makes me want to be a better person.”

The path to their 10th anniversary wasn’t the smoothest ride and overcoming the adversity of a life-changing car accident on her husband’s side of the family and the loss of a job after purchasing their first house were a couple of bumps the pair had to work through.

Now on the other side of those hurdles, McClelland has returned to fishing and Mrs. McClelland has taken over the bass angling business end as well as the household and their sons at home Justin (22), Jacob (21) and Noah (14). “This lifestyle is basically being a single parent,” commented Mrs. McClelland. “I am the one here to take them to sports, to take care of them when they’re sick, to go to parent/teacher meetings. Mike is on the road about 200 days a year. I can travel with him in the summer; but during the school year it is like being on your own.”

She noted at this point in their lives, she was lucky enough not to have to work outside the home, which makes it possible to hold down the household and the “business end” of their business while her husband is gone. Mrs. McClelland travels in the summer when school is out of session and hopes to travel with her fishing husband permanently when the children completely leave the nest. She expects this to be in the next four to five years and she plans to hit the road full-time and possibly find a new adventure of her own.

“That is the time that I may find out who I am,” she stated. “I’ve been taking care of kids since I was 18-years-old. I love taking care of our boys and supporting my husband’s passion. He is so lucky to have a passion like he does and be able to make a living at it. There are so many people that just go to work, Mike gets to go to work at what he absolutely loves and I always want him to be able to do that as long as he loves it. It will be an adjustment being without the kids and I will find what I am excited about then. I’ve become a bit crafty lately…it may be a sewing business.” 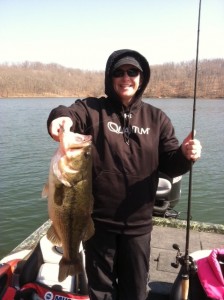 Mrs. McClelland also stated she loved fishing and playing cards and hoped to work that into the couple’s future. “I love the BassZone.com Fish n’ Chips event,” she commented. “I played in the poker tournament this year. Someday I would really like to play in the World Series of Poker too; someday I will.”

The McClellands usually return to Las Vegas each year to commemorate their first trip on their honeymoon. This year may or may not happen due to scheduling conflicts with ICAST; but Mrs. McClelland stated she has hinted to her husband, since they’re not going for their anniversary, she would like to go for her 40th birthday this year. Their plans might still be in pencil; but the World Series of Poker registration is still open.