Three months ago, Californian Randy Pierson was a 47-year-old husband and father of two who had just endured a corporate pay cut, and was considering a job change, when the homemade hair jig he cast into fast

moving current on Pickwick Lake, TN won him a B.A.S.S. Nation National Championship and an invitation to become a fulltime Elite Series angler.

He accepted the beyond his wildest dreams sort of invite, and this week, he finds himself a 40-hour drive from home trying to figure out the storied and massive, St. Johns River in Northeastern Florida. B.A.S.S. has brought an Elite Series event here three times in the last seven years, and well-known pros Alton Jones, Chris Lane and Rick Clunn hoisted the hardware. Randy Pierson had never been here in his life until this week.

So there was Pierson Monday evening at nearly dark, following two long days of practice, loading his Phoenix Boat to the back of a Toyota Tundra still sporting fresh new temporary paper license plate tags, and proclaiming with a grin, “I can tell you I love this new Toyota way more than I love the St. Johns River.”

“This is a massive body of water. I’m used to the California Delta, but that seems way smaller than this,” says Pierson. 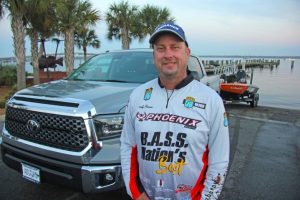 And much like he’s never been to the St. Johns, until last week, he had never towed with a Toyota. “I’d been a Chevy man all my life, but I wanted to support Toyota because they support B.A.S.S., and it will give me more opportunities to promote my sponsors once I have time to get my graphic wrap on it,” says Pierson, who literally bought the truck two days before he packed it, and started the four day, 40 hour drive alone to his best buddy and traveling companion Steve Taylor’s house in Georgia.

“I’m blown away. From the towing power to the Dynamic Radar Cruise Control, the big 38-gallon fuel tank, and just the overall comfort that doesn’t leave you feeling beat after driving all day, I’m serious, I love this truck,” proclaims Pierson. “Plus, I’m eligible to win Toyota Bonus Bucks.”

“Oh, and you know the other thing I love about it?” quizzed Pierson. “The color. It’s called “Cement.””

So while the former WON Bass Western Classic Champion and current B.A.S.S. Nation Champion may be brand new to the Elite Series, and still finds himself hunting for reasons to the love the St. Johns after two full days of practice – one thing’s for certain — he’s already declared himself forever a Toyota man going forward.

And you can write that in stone. Or in Pierson’s case, cement.