Itâ€™s Friday morning, and I got up this morning about 3:30AM and started driving over to New York. Left Illinois early in the morning so I could make that twelve hour trip over to Oneida for the last B.A.S.S. Open.

I am pretty excited to get over there and get fishing; I love Oneida, I mean itâ€™s got a lot of small mouth and large mouth, and I just gotta figure out something to catch those bigger ones. Thatâ€™s what Iâ€™m going to do and Iâ€™ve got five days for practice, so hopefully I can figure something out!

The last couple of days I have just been fishing; Iâ€™ve been fishing the local ponds around near Amyâ€™s family farm. You know, it is funny about farm ponds, I have never paid much attention, but they have been loaded with frogs, so you pull up and you see all the frogs jumping in and you notice that frogs donâ€™t really act like the frogs that youâ€™ve been throwing for fishing. 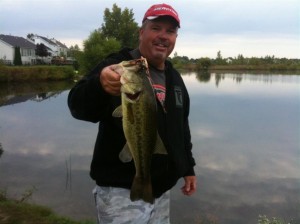 So, I have been throwing the new Dahlberg Diver Frog from River2Sea, I had some samples to test and it has worked pretty dang good! Whatâ€™s happening is it is more mimicking what the real frogs are doing in these ponds. I am looking forward to throwing it at Oneida, but that first cast the other day with that frog and the first time I threw that little one I caught something like a nice three to three and a half pounder which was one of the better fish I have caught this year in those ponds.

So when you see those frogs dive down to the bottom of those ponds you understand the methodology behind the Dahlberg Diver Frog and it really seems to mimic what true frogs do, so I am looking forward to adding that tool to my arsenal at Oneida and see if I can catch a few different fish that I never would have thought about before.

Anyway, so other than that, it has been loading everything up; after this tournament I will be driving back to Phoenix and the some tournaments out in Las Vegas and some other western stuff; I really canâ€™t wait to get back out West. Itâ€™s been a good summer, but man, Iâ€™ve missed the West and thatâ€™s where I really want to get back to fishing!

Anyway, thatâ€™s all after the next tournament, and I will let you know how Oneida goes.