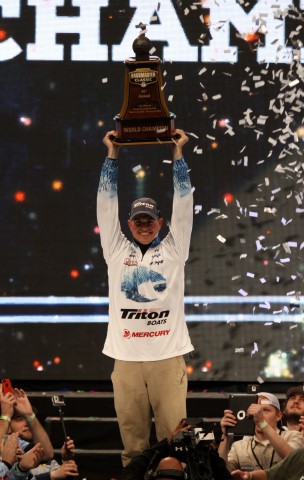 Tulsa, Okla. – Lowrance — a world-leading brand in fishing electronics since 1957 — once again confirmed its No.1 position among America’s fishing-tournament professionals, following Lowrance Pro Casey Ashley’s 2015 Bassmaster® Classic Championship performance. In the three-day event held on Lake Hartwell, South Carolina last weekend, Ashley boated a five-fish limit each day for a total weight of 50.1 pounds to win the $300,000 top prize – nearly 4 pounds ahead of the second-place finisher.

In addition to Ashley’s championship, six of the top 10 finishers were Lowrance Pro Team Anglers, and 15 of the top 25 also used Lowrance fishfinder/chartplotters. In the 56-competitor field, nearly 65 percent used Lowrance electronics. This was the fourth consecutive year in which a Lowrance angler won the Bassmaster Classic.

Casey used a set of HDS-12 Gen2 Touch fishfinder/chartplotters, supported with mapping solutions provided by Insight Genesis™ to identify underwater ditches that held the majority of bass he located to win the Classic. Ashley said the key to finding active fish that would bite in the frigid waters of Lake Hartwell was watching them closely on his Lowrance HDS Gen2 Touch fishfinder display.

“I caught them all deep,” Ashley said, “and I completely relied on my Lowrance electronics to make it happen. I could literally watch the fish come out of the ditches and onto the flat areas. The fish were holding right on the bottom, but as soon as I started to see fish move off the bottom, I would start getting bites. The key was marking fish that were slowly moving off the bottom as I passed over, then making a cast right back into those areas.”

For more information on Lowrance and its tournament-winning fishfinding technology or to locate an authorized dealer, please visit www.lowrance.com.