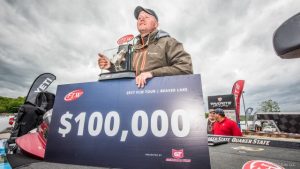 ROGERS, Ark. (April 30, 2017) – Pro Johnny McCombs of Morris, Alabama, weighed in just two bass totaling 5 pounds, 4 ounces Sunday, but it was enough to win the $100,000 prize at the FLW Tour event at Beaver Lake presented by General Tire. McCombs earned the win by 2-pound, 6-ounce margin over second place pro Jason Reyes of Huffman, Texas, in the four-day event hosted by Visit Rogers, that featured a field of 161 of the world’s best bass-fishing professionals competing in one of the most challenging tournaments in recent FLW history.

Another round of severe thunderstorms swept through northwest Arkansas Saturday night, bringing water levels up an estimated 4 or 5 feet overnight. The muddy water that greeted the final 10 anglers Sunday proved to be an extreme challenge, as only two anglers were able to bring a five-bass limit to the scale. McCombs only managed two keepers, but they were enough to earn the Alabama angler the victory in his first season back on Tour after a 14-year hiatus.

“I still can’t believe it,” said McCombs, a three-time Forrest Wood Cup qualifier who earned his first career victory. “This one probably won’t sink in for a while, but it was a long time coming. It’s so awesome to be back out here and doing what I love again and this 100 thousand will go a long way.”

“I just kept working my way down the bank and trying to keep my bait in the strike zone for as long as I could,” McCombs said. “I was fishing the flooded bank – grass, people’s front yards and lawns, boat docks – anything that looked good. The water got too high today, and that’s why I didn’t get many bites. I missed a couple and I probably should have weighed in 14 pounds, but I just couldn’t hook them up today. Luckily I caught the two that I needed.”

Complete results for the entire field can be found at FLWFishing.com.

Overall there were 28 bass weighing 55 pounds, 2 ounces caught by pros Sunday. Two of the final 10 pros weighed in five-bass limits.

In FLW Tour competition, pros and co-anglers are randomly paired each day, with pros supplying the boat, controlling boat movement and competing against other pros. Co-anglers fish from the back deck against other co-anglers. The full field of 322 anglers competed Thursday and Friday Co-angler competition concluded following Friday’s weigh-in, while the top 20 pros based on their two-day accumulated weight advanced to Saturday. Only the top 10 pros continued competition Sunday, with the winner determined by the heaviest accumulated weight from the four days of competition.

FLW is the world’s largest tournament-fishing organization, providing anglers of all skill levels the opportunity to compete for millions in prize money in 2017 across five tournament circuits. Headquartered in Benton, Kentucky, with offices in Minneapolis, FLW conducts more than 274 bass-fishing tournaments annually across the United States and sanctions tournaments in Canada, China, Mexico, South Africa and South Korea. FLW tournament fishing can be seen on the Emmy-nominated “FLW” television show, broadcast to more than 564 million households worldwide, while FLW Bass Fishing magazine delivers cutting-edge tips from top pros. For more information visit FLWFishing.com and follow FLW at Facebook, Twitter, Instagram, YouTube and Snapchat