Well, I told you about getting ready for our second Skeet Reese Kids Fishing Day fundraiser for the community center. The event was this past Saturday, and I’ve got to tell you, it was a great day.

Outside of the months of planning and organizing that Kim did, the actual preparation began a couple of weeks ago as stuff started arriving for the event from my sponsors at Wright & McGill Co., Eagle Claw, TroKar, Berkley and Dick’s Sporting Goods. We had boxes and pallets delivered with bags and prizes and hooks, lines, kids combos and bait – it was amazing.

We had these giant, green Dick’s Sporting Goods bags that we used as the registration bags for the kids. We spent a day loading them with goodies. We put spools of Trilene, bags of PowerBait, and Eagle Claw hooks into each one. We also put a TroKar weigh bag for kids to carry their fish in and some bobbers made to mimic the shape and colors of my Stratos / Mercury tour boat. It was pretty cool to see those floating on the water along with all of the bright orange ones we handed out.

Friday morning we got to the park and met the California Department of Fish and Game truck so that they could plant the 1000 pounds of hatchery rainbow trout into the pond. The average size of the fish was a pound and a half, so they put somewhere between 600 and 700 fish in the pond.

Lea and Courtney’s classes from school came out and met us at the pond and the guys from the DFG were so cool, they loaded the fish into five gallon buckets so that they could each dump a bucket of fish into the pond before they used the chute to release the rest. 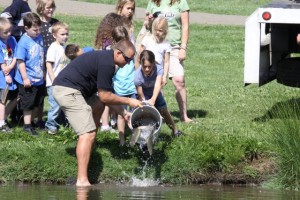 After the truck left, we started setting up all of the stuff for the next day. We set up a huge, 20×20 tent that serves as the headquarters for the event, and we set up tables and chairs for the Meadow Vista Lions Club to serve their hot pancake breakfast in the morning. We were out there with family and friends most of the day, then we went home to relax a little before the event.

Saturday morning started early, as we had plans to start fishing at 7:00. We arrived and unloaded the trailer with all of the Dick’s Sporting Goods gift bags and when 7:00 hit, Kristen Brown; the daughter of my longtime friend Kent Brown sang the National Anthem and did an amazing job – she actually had me kind of choked up. Then, we told everyone to start fishing.

The fishing was slower than we thought it would be, and it took a while for kids to start bringing fish to the cleaning station. When the kids filled their limits, or they decided they were done, they went to play in the bounce houses and in the portable Game Truck that was on site. They also could get their faces painted, visit with the balloon tying clown or get smoothies and hot chocolate at the mobile Maui Wowi coffee vendor that came.

We had an auction with a bunch of cool items including signed memorabilia from Roy Halladay and Chris Carpenter and a custom electric guitar by Woodshop Rocks – black and yellow of course. There were guide trips, golf outing and all sorts of cool prizes.

I’m not sure how many kids we ended up with, but we had a bunch signed up, and it will take us a few days to add up all of the donations. We’re really excited to see what the event raised, but even more important is the fact that we all came together to give kids a chance to go fishing.

Some of those kids caught their first fish at the event, and that really matters the most to me. I love what I do, and to be able to share that with families is what I really love about it.

Kim and I really want to thank everyone for coming out and participating, my sponsors for their donations, the vendors who participated; but, most importantly is our friends and family who really stepped up and got behind it. We couldn’t have done it without you guys and that means so much to us. Thank you all.