We happen to find ourselves in the middle of the 2012 Bassmaster Elite Series season, and anglers are fighting for titles, for Classic berths, for sponsors and for media attention. Working in this industry, and with the anglers provides proof that professional fishing is very much a business. 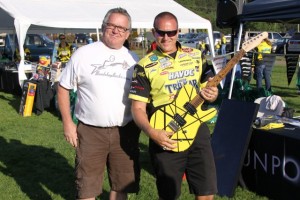 While some anglers are clawing for their very existence, others are diligently working to drive visibility and generate more impressions. But, while they are justifiably, and most certainly in the business of being the center of attention; it really is wonderful to see the efforts that many of them make to share the love of the sport they have with the community.

Being able to participate in their efforts is even more the blessing. It shows how much more than businessmen they are. Fishing is absolutely a business, but even though they are skilled as businessmen, they never lost their love for the pursuit of fishing. Catching fish is an absolute must for them. In order to survive on the highly competitive professional tours, they must perform.

But, it is more than that. These guys love what they do, and when they endeavor to share the love you get a chance to see the passion of their love for the sport, and for what they do.

One instance of that happened Saturday May 19 as Bassmaster Elite Series pro Skeet Reese; from Auburn, Calif. and his wife Kim organized their second Kids Fishing Day in their community. 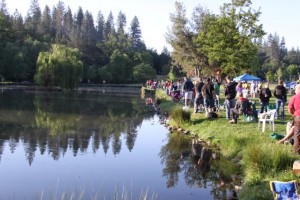 The Reason
The Reese’s hometown address is the city of Auburn, Calif. but their community is a small town on the outskirts of Auburn called Meadow Vista. Meadow Vista is a community of around 4,000 people. It has schools, businesses and churches. Really, it reminds you of some of the small towns that you may see on television where most of the neighbors know each other and kids can still play in the fields and hills around the area.

The area is very active, and the community park has soccer fields, baseball fields, tennis and pickleball courts; but, because of funding, it does not have a completed community center. The shell of the project is completed, it has walls, windows and a parking lot, but it is still short of being able to open.
When the idea to combine a fundraiser for the community center and a kids fishing day hit the Reese’s in 2011, they jumped at the opportunity. Their first effort drew 400 kids and their families and raised over $6,000 for the community center.

Much to the delight of the area, they chose to do it again in 2012.

More than a Fundraiser
For Reese himself, the event is a chance to give a gift that means more to him than any monetary gift he and his family could provide. The pride to deliver a quality event is evident as the planning goes on for as much as nine months. 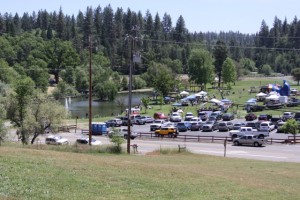 Most importantly for Reese, it provides a chance for kids to catch fish. The California Department of Fish and Game donated 1000 pounds of rainbow trout to the event, and trucked them to the pond at the park from their Nimbus Fish Hatchery. Those fish were planted on Friday morning, and were awaiting the event participants when the event began Saturday morning.

Throughout the day, as fish were caught and put into the TroKar weigh bags to be taken to the cleaning station, the excited children would pass by the tent that served as the registration center and share their catches with Reese and the volunteers who showed up to help.

You could see the joy on their faces, but at the same time, you could feel it exuding from every part of Reese. He would say it several times throughout the event that being able to share his love of fishing with kids was the best part of the whole event. 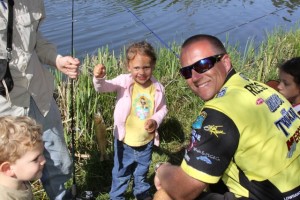 At one point, one of the volunteers; Dr. Randall Hensley, a Chiropractor with his practice in Meadow Vista, ran around the pond to inform Reese that a little girl named Isabella had just caught her first fish ever. Reese shared the news over the P.A. system with the whole crowd then turned around with his ever telling moistened eyes exclaiming that was all he ever wanted to hear from this day. His hope of being able to give even one child the opportunity to catch their first fish had been fulfilled, and it was a moment that visibly moved him deeply.

As the festivities wore on through the day, more instances of first fish were shared with the group, and one attendee, the owner of a fishing industry periphery company who drove 140 miles one way to attend, even sent a message to the Reese’s saying; “Thanks I had a great time today it was nice to experience the goodness that fishing brings to all ages!! The thrill of assisting the two sisters ages three and four years old in reeling in their first fish ever! Was very rewarding and really puts it into perspective.”

That message coming after the event, brought the same emotion to Reese again.

What’s Left Behind?
While the community of Meadow Vista might be left with warm fuzzy feelings when they think of someone of the Reese’s position putting out the kind of effort they do for the community center, there is more to take out of it for those who get to see all sides of the package. 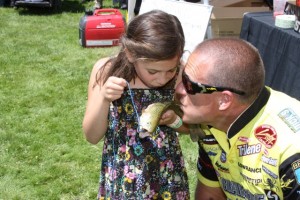 Yes, there will be money raised in support of trying to complete the center, and there was much fun had by many. The genuine desire to give a helping hand by the family, friends and members of the community was exciting. There were as many as three dozen replica black and yellow jerseys given to the volunteers running around the park, manning booths and serving as net men and bait station attendees; probably more.

But, ultimately, the most encouraging and uplifting part of the whole event was seeing a man give so much of his heart to others that he may know a little, or not at all. Equally as touching was to see the effort expended by his wife to organize and plan every facet of an event to support her community and her husband.

A Little Bit Personal
I went there in part to cover a local fishing event involving one of our sport’s most influential anglers, but instead got to see a family give of themselves completely. It was certainly an experience I was proud to be a part of.

Of course, I was there as Advanced Angler with the thought of covering an event, and certainly, the story; for storytelling sake, is worthy of any news item we could share with readers. However, it was so much more for me. It is events like these that remind us that there is a heartbeat in this sport, and when any of us share that with people, we certainly share more than the business of fishing – we share a pulse that might radiate through them for a lifetime. 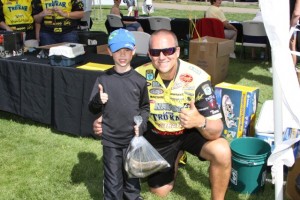 All I can say is thank you Skeet and Kim, it was certainly an honor.