Boyd Duckett – On to the Next Round, but those Tie Breakers

The second day of this California Delta Elite Series tournament was probably exciting for those guys near the lead, because they were pulling in huge bags. For me, it wasn’t real exciting. But it also wasn’t bad.

I made the cut. I moved up from the fifties to a tie for 42nd. I said that 14 to 15 pounds a day would make the cut, so today I went to places where I was pretty sure I could bring in 15 pounds.

I fished different styles. I caught a bunch of respectable-sized fish, but I never hooked a big one. I never saw anything like the 10-pounder I chased yesterday. I scrambled all day. Scratched and clawed and stayed on the move.

What I decided late last night was that I was NOT going to go after bedders. If I had done that, I might have finished the day with a zero. And even if I gambled on catching the bedders and caught some, I wasn’t going to get anywhere near the lead.

With all that said, the smart play today was the conservative route. Go out and catch the 15 pounds I was pretty sure would help me make the cut. 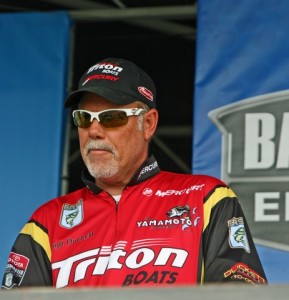 Now I’ve got to make another decision about tomorrow. If I can do the same thing tomorrow, I can probably move up a little further in the standings. That kind of move would also help me move up in the Angler of the Year points.

But I don’t know what I’m going to do.

Let me add something. Let me tell you about something that’s weird.

I’m tied for 42nd. But technically I’m in 43rd place, because even though Kelly Jordan and I have the same total weight – 30 pounds, zero ounces – Kelly gets 42nd place because he has the largest single-day bag of our two competition days.

It’s no big deal, because this is just the second round. But I thought it was worth mentioning, because I can’t seem to win a tie-breaker.

I would up tied with two other anglers at Guntersville a couple of weeks ago, and I ended up third of the three (because my largest bag was the smaller than their largest).

At a Major League Fishing event in Denton, Texas, I lost a tie-breaker with Byron Velvick, because he had the largest fish. I didn’t get to move to the next round.

Two years ago, I lost a spot in the Bassmaster Classic because I lost a tie-breaker.

Why can’t I win a tie-breaker?

This is getting old.