Colors, colors everywhere – enough to make you lose your hair.

Just about every manufacturer has a color chart for each individual lure that would be enough to give an interior decorator the basis for an unending supply of color samples. For the everyday angler, looking through those color charts can be enough to send their brain into a seizure.

Without a basis for deciding which color to throw when, anglers can often find themselves randomly switching through color choices trying to find a shade that will produce. As much as colors can make a world of difference in a few instances throughout the year, bass will typically strike something if it is presented in the right way, and most importantly – in the right place.

There are times that choosing the brown worm with the medium orange belly and copper flake might be all the difference in the world to the bass, but usually, color is more for the confidence of the angler. How many tournaments have you been to that when polled, anglers give a variety of color choices responsible for their catch? One says green pumpkin, one says plum, one says junebug, one says black and blue and the other says kind of a purply pink with fuchsia flake in the top and hologram flake in the bottom. 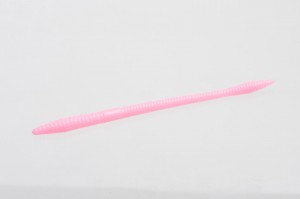 First of all, when you hear an angler explain his color choice like that; your first thought should be to wonder what kind of a “Purple Haze” he put himself into by chewing on one of those special worms. To rush out and try to find that exact color might result in a trip to the metal ward.

The best pros in the business; those who make their livings with a rod and reel in their hand, generally do everything they can to keep things simplified. Their experience fishing on bodies of water all over the country has taught them that; A: they can generate strikes from bass on lakes from coast to coast on similar colors, and B: if they tried to carry the entire color chart of every bait they use, their trucks wouldn’t likely get anywhere, and their boats wouldn’t float if they did.

We spoke to four professional anglers to get their take on choosing color for the lures that they are most known for. We focused on lures that are good for use at this precise moment in the seasonal patterns; worms with Harold Allen, Flippin’ and Froggin’ with Ish Monroe, cranking with John Crews and spinnerbaits and bladed jigs with James Niggemeyer.

Here’s what our panel had to say. 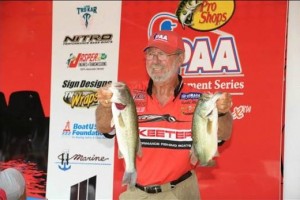 Harold Allen – The Worm King
Allen earned a reputation on tour of being a master with a soft plastic worm. His penchant for excellence with a Texas Rigged soft plastic earned him a series of accolades as well as a long list of accomplishments. Allen, from Shelbyville, Tex. is a 15-time Bassmaster Classic qualifier, has earned $430,000 in his B.A.S.S. career which includes one victory, 27 top 10 finishes and the respect of fans and competitors alike.

At 66 years old, Allen continues to compete today; in fact he earned a trip to the Toyota Texas Bass Classic this fall by finishing in the top 15 in the PAA Series points. Along with his love of competing, he still relies on the plastic worm, and like many other pros, decides to keep it simple when choosing colors.

“I probably carry four or five colors of worms in my boat,” said Allen. “I choose them based on the water clarity, and I adjust size of the worm after color to try and generate strikes depending on the water confitions.”

His rule of thumb is to go to transparent colors in clear water, then graduate to more opaque colors as the water gets dirtier. “I use a lot of watermelon /red flake in clear water, and as the water turns more stained, I turn to Red Bug a lot in slight stained water; especially in Texas,” said the Ouzo Baits pro. “As the water color gets darker, I’ll turn to green pumpkin, then Junebug, and finally to Black Neon.”

While he’ll often start out with a 10” Ouzo Ribbon Tail worm, he will find that he needs to downscale if even the most transparent colors fail to produce strikes. “It’s finding the right combination of color and size that makes the difference,” he said. “Putting together the right combination works all over the country. 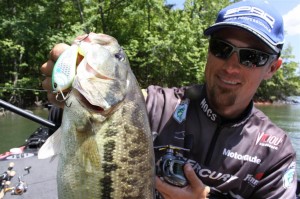 John Crews – Crank-Missle
Growing up in the Virginias, John Crews became a fan of the crankbait. If it’s made of wood or plastic and has a diving lip, Crews has probably owned it. Growing up in the shadow of crankbait legend David Fritts, Crews learned to apply the diving plugs very thoroughly. His love of the baits led him to work with SPRO to develop a family of crankbaits, and colors are always an area for discussion

Like any other lure, Crews knows areas around the country have their regional favorites. However, Crews knows what colors he needs to consistently put bass in the boat, no matter where he is. In the fall, because bass feed so heavily on shad, Crews has his main colors scaled down to only a select few and he choose by water clarity.

“I really like a brown back crankbait in the fall,” he said. “For some reason, bass really seem to key in on a bait with a brown back this time of the year.” With that in mind, he worked with SPRO to add colors with that in mind. For clear water, he likes to throw a Rootbeer Chartreuse color in his Little John, and if the water has more color in it, then he goes to a color he calls Pig Pen; which has more chartreuse in it. He will also occasionally mix in the Spring Craw color, which has a yellow / brown concept to it.

If the water is dark stained to dirty, Crews relies on a bait with a lot of chrome in it. One color that he revealed is tied on his deck most of the fall season is a new one called Chrome Olive; which is a highly reflective chrome sided bait with an olive green back on it. “I find that this color really throws a lot of flash into the water that is effective this time of the year,” he said. “I wanted it for specifically this time of the year, and it has proven to be deadly for me in the fall. 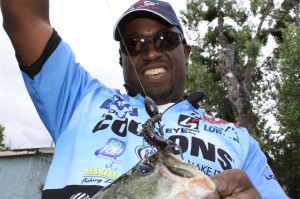 Yo Ish – Flippin’ and Froggin’
Ish Monroe likes to get down and dirty. Finding the Hughson, Calif. pro on the water without a Flippin’ Stick or a Frog rod in the fall would be like Thanksgiving without turkey. The seven-time Bassmaster Classic Qualifier is at home in the weeds. But, even with the plethora of colors available to him in every lure category, Monroe likes to focus on keeping it simple.

“Bluegill are big to me from the summer through the fall,” said Monroe. “Because I am looking for big fish that have stayed shallow; I try to focus on presenting them lures that will mimic the forage they are targeting; bluegill.”
With that in mind, Monroe looks to present lures that not only have the color appearance of a bluegill, but also the right kind of bulk to attract the bigger bites. He flips creature baits primarily, but he goes the extra step by adding a Paycheck Baits Punch Skirt in between his lure and River2Sea Tungsten Trash Bomb sinker.

“Browns and purples are great bluegill imitators in the fall,” he said. “I’ll put a Peanut Butter and Jelly colored creature bait on my Paycheck Punch hook, then thread an Under the Table Paycheck Punch Skirt on it. Or, if they are looking for more of a green tone, then I will turn to Sprayed Grass with a Kash Money Punch Skirt. If the water is really dirty though, it’s hard to beat black and blue.”

For his Snag Proof Phat Frog, Monroe said that sticking with bluegill patterns in his topwater frog I also the best way to generate strikes. He worked with Snag Proof to develop two colors; Sexy Ish and Ishalicious that were designed to mimic bluegill patterns. 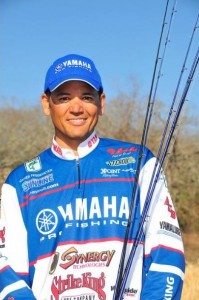 James Niggemeyer – Live by the Blade
The Van, Tex. pro said that he truly relies on locating shad that are moving into the backs of creeks in the fall, and as a result, he likes to target them with one of two baits, a Strike King Tour Grade or Burner Spinnerbait and their Pure Poison bladed jig.

He said there is no real way of knowing when the bass will choose to strike either lure in particular, but said that he tends to keep them both tied on any time he is on the water. “I typically start with a spinnerbait because I am trying to mimic shad,” he said. “But, if the bass don’t respond to the spinnerbait, I can pick up the Pure Poison.”

He prefers to choose colors by letting water clarity dictate. In clear water, he likes to go with the Burner Spinnerbait in Smokey Shad color because the translucent skirt and small blades put off enough flash without being obtrusive. If the water turns slightly stained, Niggemeyer opts for the Tour Grade Painted Blade Series baits and starts with the Chrome Sexy Shad, then turns to the Sexy Shad model in water that is slightly more turbid. If the water is dirty, he turns to Chartreuse Sexy Shad, or the Chartreuse Belly Craw colors.

The color selection on the Pure Poison is more simplistic, mainly because the colors offered in it are fewer. “In clear water I try to stay with the white with silver flake,” he said. But, if the water gets dirty, I turn to white and chartreuse. Either one of these colors will do a great job of mimicking shad: I just change them for getting the most visibility in the specific water color.”

Wrapping Up
While you may walk through your local tackle store and see the walls and rows of color options, keeping it simple – like our four pros above – will help you stay focused more on the fishing than the rainbow of colors in your tackle box.

There’s an old adage that throwing the wrong lure in the right place will get you more bites than the right lure in the wrong place. Keep your color choices simple, and focus more on locating bass and your success will improve.