9/14/2011 – In our inaugural year, Advanced Angler decided to do something big to help announce the beginning of our presence on the Internet. The idea to run a Fantasy Fishing competition was launched and the decision was made to put on a season long competition that combined the Bassmaster Elite Series and FLW Tour Majors into a single tournament.

The idea was exciting, and thanks to Monster Fishing Tackle.com, Shimano, GLoomis, Power Pro, Stratos Boats, Mercury Outboards and MotorGuide Trolling Motors, the idea became a reality for 2011. There were a combined 14 events in the sport’s two biggest tours in 2011, and the competitors would choose a team of five pro anglers from the field to earn points based on their finishing position.

Of the 14 events, the competitors would get credit for their highest scoring 10 events, and thanks to all of the sponsors listed above; the grand prize would be awarded to the individual competitor with the highest total. That competitor would receive a Stratos 176XT bass boat equipped with a Mercury outboard and MotorGuide trolling motor.

With the completion of the Pickwick event, our team went to work to check and double check the results, and our winner was Bryan Hinton, a retiree from the U.S. Air Force, and a resident of San Angelo, Tex. Hinton’s final score was 9304 points; which was enough to outdistance second place by 186 points.

Hinton was able to attend the Forrest Wood Cup and pick up his honorary certificate for his grand prize; which was presented to him by Stratos Pro Staffer and 2007 Bassmaster Angler of the Year and 2009 Bassmaster Classic Champion Skeet Reese. Also in attendance at the ceremony was Bassmaster Elite Series pro and six-time B.A.S.S. Champion Mike McClelland of Bella Vista, Ark.

Advanced Angler’s Webmaster and Associate Editor Tom Leogrande spent some time with Hinton to discuss several topics, as well as video the awards presentation. The audio interview, the presentation video along with several pictures of his day at the Forrest Wood Cup can be seen below. 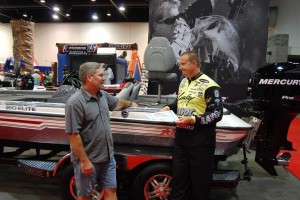 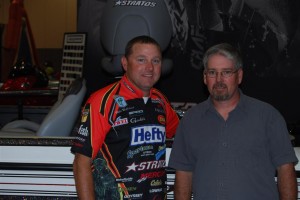 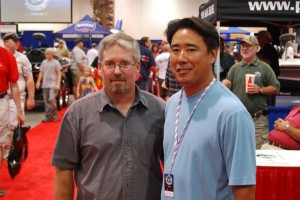