Skeet’s Beat – Back to Cali

We’re back from our family Holiday vacation to Mexico, and as much as we had fun down there; it’s nice to be home.

I tell you what the best part of the whole trip was – no cell phones!Â  I got to spend time with my family without any interruptions, and I got to spend some great one on one time with the girls.

I took them fishing for Jack Crevalle, Bonita and Dorado.Â  Lea went with me last time we went, but this was Courtney’s first trip on the big charter boat fishing like that.Â  They caught several Jack Crevalle around 15 pounds, but couldn’t land anything bigger. 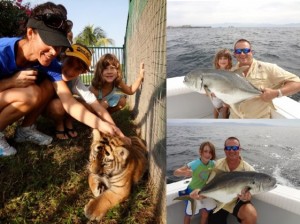 Courtney did have about a 35 pounder on the line, and it took her awhile to get it to the side of the boat, but she did.Â  The deckhand reached out grabbed the line and tried to lift it in the boat and broke the line while doing it.Â  That was disappointing, but she did a good job fighting it.

We also got to swim with the dolphins while we were there.Â  We went into this little saltwater pond and got to play with them in the water.Â  We would grab hold of their dorsal fins and get pulled around by them.Â  But my favorite part was letting them push us out of the water by putting our feet on their nose.Â  They are really strong and can get me clear of the water, and the girls really flew; it was fun.

We also got the chance to experience playing with a pair of six week old tiger cubs. They were really cute and fun to play with, but I think the cubs got really tired out by the girls, because they eventually went and laid down in the shade and closed their eyes.

Other than that, now that I’m home I’m getting totally focused on the business of fishing, and getting ready for the season.Â  The holidays were great, but vacation is over and it’s time to focus on fishing.

I’ll be working on the graphics for the Stratos and the Big Rig with Corey from Sticky Graphics and I’m pretty sure we’ll have some cool newÂ stuff on the rig for 2012; I’ll show you that as soon as I can.