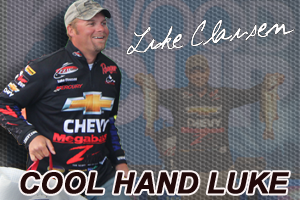 Happy New Year! Itâ€™s been a good off season so far, and 2012 is kicking off nicely. I have signed with most of my sponsors from last year once again and I have added a few new ones. I added Mercury this year which was a nice change, especially since I was with Mercury for years prior to the last few years. Thatâ€™s the way sponsors go, different tournament organizations align with different sponsors and itâ€™s important to make moves that benefit you and your sponsors the most.Â  Mercury is a great company and I am excited to be back on board with them.Â  In addition, I am still going to be with Megabass and Z-Man. I actually expanded my contract with Z-Man a little bit which I will explain more about in the future.

I also have been busy hunting birds and deer this off season in Iowa and Illinois as well as white tail back here in Washington. Â Itâ€™s been nice to stay outdoors, but do something different than fishing. Fishing all the time can get to be mundane, especially without the competition.Â  Thatâ€™s what drives me to fish a lot of tournaments, the competition. To just go fun fishing can get old, itâ€™s fun to do something a little more interesting likeÂ hunting and it helps keeps those predatory instincts sharp.

I got a new truck here in Washington which is exciting. I bought a new Silverado HD with Duramax. Itâ€™s the same truck I have back east, I just couldnâ€™t resist not having one out here.

I also have been doing a little bit of Walleye and Trout fishing the last couple of weeks here and I will probably do some more in the coming weeks.Â  I am actually going this weekend over to Potholes reservoir with some friends. Itâ€™s nice to get back out on the water, I was starting to get the itch to go fishing again.

Believe it or not, I spend a lot of time on the Internet checking out new baits and techniques and reading up on stuff. I am buying way more stuff than I really need because I am sitting in the house and not fishing.

I like to start the new year by setting some goals. Last year my goal was to win events. This year, although winning is always a goal, I am hoping to try and overcome, and it is hard for me to deal with, is fishing super obvious stuff. What I mean is, often I won’t fish the super obvious stuff because I know its going to get pounded all week of a tournament. I look for less obvious places, but there have been so many tournaments lately that have been dominated by anglers fishing really obvious stuff, at least to me. A perfect example is what happened at Lake Pickwick. Those guys were fishing and dominating the event by fishing the most obvious stuff, I tend to avoid those. This year I am going to do my best not to dismiss a spot just because everyone else is going to fish it. Especially in late summer when there are schools that are big enough that they get beat up in practice, yet they are still good for the tournament. So Iâ€™d say my biggest goal is not overlooking the obvious stuff. I have said the same thing for many years, but I continue to spend too much time fishing the subtle stuff.

Also this year I am excited to go back to the Potomac River, as I won there last year. I love the fishing there, itâ€™s a great place. I am excited about the Forrest Wood Cup and the five hundred thousand dollar prize, but not so much about Lake Lanier. I donâ€™t really like fishing blueback lakes in the summer when so many fish are suspended. The thing that I really struggle with is fishing isolated brush piles, I feel like I am casting out in space trying to hit one that I can see on my graph. I know that is the way that it will probably be won and if itâ€™s not won that way, the top ten will surely be dominated that way.Â  So it can be a little discouraging to know that it will be that style of fishing, but anytime you fish for a half a million dollars it is exciting.

I think in terms of my results from last year and improving on them I want to work most on starting off stronger as I tend to have really great second days and strong finishes but not as strong starts as I would like. I generally get stronger as the event goes on, which I am proud of, but I want to get off to better starts more consistently this season.

I am looking forward to the season to kick off the first week of February. I think it starts with one of the best tournaments we have all year,Â  Lake Okeechobee. The lake is just on fire right now, the water came back up and the local tournaments are showing really good weights. So I think we are going to see a blowout kind of event. Â Last year I think I finished 70th. I thought I was doing well after the first day, and as it turned out I was in the middle of the pack. I did move up to 70th to get the last little check. It sounds like it has gotten even better out there and it might take 20-pounds a day to even make a little paycheck in this tournament. That is something I am really excited about, starting off the New Year catching those kind of fish and enjoying the warm weather and hopefully winning some money. I may even get a little hunting in with Andy Morgan for wild hogs a few days before we start fishing.

There are two new baits that I am excited to give a shot on Okeechobee is the new Z-Man Punch CrawZ. Then the other bait is Z-Man’s Grass KickerZ, its a new soft swimbait that is going to be a pretty cool deal. It moves, wakes and acts like a swimbait and it will probably be a pretty big player down there. For the most part, you can stick to June bug and watermelon and thatâ€™s about all you need in terms of colors of plastics on the Big O. We’ll see how it plays out.

Well, I am off to work on my Megabass order for the year. I hope each of you has a banner 2012, loaded with lots of huge fishâ€¦ well, all of you not fishing the FLW Tour that is.