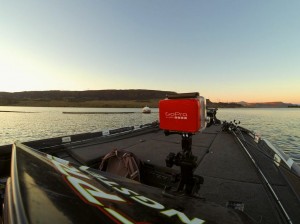 BIRMINGHAM, Ala. (Feb. 6, 2014) — The go-anywhere GoPro® camera is going to the Bassmaster Classic. GoPro has come on board as a presenting sponsor of the 2014 GEICO Bassmaster Classic, Feb. 21-23, on Lake Guntersville and out of Birmingham, Ala.

“GoPro and the Classic are a perfect fit,” said Bruce Akin, CEO of Birmingham-based B.A.S.S. “With its name on Bassmaster’s highest-profile event of the year, GoPro will be reaching the most avid fishing fans in the world. More anglers will soon be learning a new way to preserve and share their fishing memories, cast-by-cast and catch-by-catch.”

“We are thrilled to be the exclusive camera of the Bassmaster Classic,” said GoPro Vice President of Marketing, Paul Crandell. “And with GoPro on the scene, not only will viewers get a new look and firsthand access to the greatest fishing event in the world, it will also introduce the fishing world to more ways to capture all the excitement of their own fishing adventures.”

The 2014 GEICO Bassmaster Classic presented by GoPro is the 44th annual championship of pro bass fishing. The three-day competition pits 55 of the world’s best anglers against each other for the Classic’s overall cash payout of more than $1 million. The fishery is Alabama’s renowned Lake Guntersville.

The anglers will bring their catches to the arena of the Birmingham-Jefferson Convention Complex in downtown Birmingham, where thousands of fans are expected to appear daily to watch the weigh-ins. The concurrent consumer show, the Bassmaster Classic Outdoors Expo, will be at the same facility. All Classic activities are free and open to the public.

As the Exclusive Camera of the Bassmaster Classic, GoPro will exhibit at the Classic Outdoors Expo and have prominent exposure during the arena weigh-ins, which will be featured in The Bassmasters TV show on ESPN2. The Classic shows will air over 12 hours, including a prime-time slot for the finale, 8-10 p.m. ET on March 2.

As GoPro reaches consumers, professionals will also be able to discover the versatility of the HERO3+ camera simply by watching The Bassmasters on ESPN2. TV production has been making good use of GoPro cameras for more than a year, said Mike McKinnis, producer of the award-winning sports show.

“With GoPro, we have achieved cutting-edge video on — and under — the water, as well as of the professional anglers themselves,” McKinnis said. “We’ve attached HERO cameras to pros’ boats, and even to pros by using the chest harness. The biggest benefit is the ability to get GoPros on most of the field of Elite anglers so we don’t miss any of the action from on the water.”

GoPro also will be widely featured on Bassmaster.com, the largest fishing site on the Internet. GoPro-generated video, including how-to segments, tournament coverage, “Best of GoPro” collections and other content will be presented throughout the 2014 season.

GoPro is the maker of the world’s most versatile camera and enabler of some of today’s most engaging user-generated content. The company was founded in 2004 by Nicholas Woodman, an avid surfer who wanted a way to self-document his surfing expeditions. Today, GoPro cameras, including the recently announced HERO3+ models, and more than 50 mount and accessories are available at retailers worldwide. GoPro has also developed the free GoPro App and GoPro Studio editing software to quickly and easily capture, edit and share photos and video across social networks.

For more information about the company and the GoPro HERO3+ camera, go to http://gopro.com.

About B.A.S.S.
For more than 45 years, B.A.S.S. has served as the authority on bass fishing. The organization advances the sport through advocacy, outreach and an expansive tournament structure while connecting directly with the passionate community of bass anglers through its Bassmaster media vehicles.

The Bassmaster brand and its multimedia platforms are guided by a mission to serve all fishing fans. Through its industry-leading publications — Bassmaster Magazine and B.A.S.S. Times — comprehensive website Bassmaster.com and ESPN2 and Outdoor Channel television programming, Bassmaster provides rich, leading-edge content true to the lifestyle.

B.A.S.S. offers an array of services to its more than 500,000 members and remains focused on issues related to conservation and water access. The organization is headquartered in Birmingham, Ala.

About GoPro
GoPro’s versatile cameras and accessories enable people to self-capture immersive and engaging footage of themselves enjoying their favorite activities. GoPro’s HERO® line of wearable and gear-mountable cameras are used collectively by more consumers, professional athletes, and video production professionals than any other camera in the world. Based in San Mateo, California, GoPro’s products are sold in more than 30,000 stores in over 100 countries worldwide and direct via GoPro.com.  GoPro branded content is shared and enjoyed by millions of people on popular media channels such YouTube, Facebook, Vimeo and Instagram.

GOPRO® and HERO® are trademarks or registered trademarks of GoPro, Inc. in the United States and other countries.