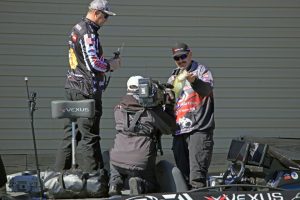 MONROE-WEST MONROE, La. (Feb. 6, 2022) – Fishing what he called a “Bubba Shot”, pro Jared Lintner of Covington, Georgia, weighed in 11 scorable bass on Lake D’Arbonne Sunday totaling 33 pounds, 2 ounces, to take a commanding lead on Day 1 for Group B at the B&W Trailer Hitches Stage One Presented by Power-Pole in Monroe-West Monroe, Louisiana.

Lintner grabbed the lead around 11 a.m. and never relinquished control, increasing his lead by another 10 pounds in this third period alone. He will bring a 14½-pound lead into Tuesday’s Qualifying Round finale for Group B. Gonzales, Louisiana pro Gerald Spohrer ended the day in second place, catching six bass for 18-11, while David Dudley of Lynchburg, Virginia, boated seven scorable bass totaling 16-6 for third place. Covercraft pro Bradley Roy of Lancaster, Kentucky, also weighed in 16-6, but sits in fourth place due to tiebreaker rules, and Favorite Fishing pro Jonathon VanDam of Kalamazoo, Michigan, rounds out the top five with eight bass for 16-1.

The 40 anglers in Group B will now have an off day on Monday, while the 40 anglers competing in Group A will complete their two-day Qualifying Round of competition. Group B will conclude their Qualifying Round on Tuesday. The six-day event, hosted by Discover Monroe-West Monroe, showcases 80 of the top professional bass-fishing anglers in the world competing for a purse of $805,000, including a top cash prize of $100,000 to the winner.

“Today was a good day,” said Lintner, a California native who recently moved east to Georgia. “I assumed it was going to be tough, and it was. I threw crankbaits and flipping jigs and vibrating jigs – at one point I even broke out a buzzbait – but I never had any bites on anything other than my Bubba Shot.

“It’s basically a drop-shot rig with heavier line,” Lintner continued. “I’m using 16-pound Sunline Shooter with a Roboworm, Aaron’s Madness-colored, and just making a lot of casts. It ended up being a really great day.”

“I’m really looking forward to getting back out here and fishing again on Tuesday,” Lintner went on to say. “This is a neat lake, and the people out here are awesome.”

Unlike Lintner who mainly targeted docks, second-place pro Gerald Spohrer did most of his damage cranking around riprap on the lower end of the lake.

“It was very hard for me to get fish to bite, but the ones that did for me came on a Nomad squarebill crankbait, and that was the key,” Spohrer said. “I fished it with a very slow retrieve, letting it tick off of every single rock. Sometimes I had to make six or seven casts in a row to get a fish to bite it. But that’s what it took to trigger those fish. They didn’t want to chase anything, they wanted it right across their mouth.”

The top 20 pros in Group B after Day 1 on Lake D’Arbonne are:

The 40 Anglers in Group A compete in their two-day qualifying round on Lake D’Arbonne on Saturday and Monday – the 40 anglers in Group B on Sunday and Tuesday. After each two-day qualifying round is complete, the anglers that finish in 2nd through 20th place from both groups advance to Tuesday’s Knockout Round on Caney Creek Reservoir, while the winner of each group advances directly to Wednesday’s Championship Round. In the Knockout Round weights are zeroed, and the remaining 38 anglers compete to finish in the top 8 to advance to the Championship Round on Bussey Brake. In the final day Championship Round weights are zeroed and the highest one-day total wins the top prize of $100,000.

About Major League Fishing
Major League Fishing (MLF) is the world’s largest tournament-fishing organization, producing more than 250 events annually at some of the most prestigious fisheries in the world, while broadcasting to America’s living rooms on CBS, the Discovery Channel, the Outdoor Channel, CBS Sports Network, the World Fishing Network, and on-demand on MyOutdoorTV (MOTV). Headquartered in Tulsa, Oklahoma, with offices in Benton, Kentucky, the MLF roster of bass anglers includes the world’s top pros and more than 30,000 competitors in all 50 states and 13 countries. In 2019, MLF expanded its portfolio of catch, weigh, and immediately release events to include the sport’s strongest five-biggest-fish format tournament circuits. Since its founding in 2011, MLF has advanced the sport of competitive fishing through its premier television broadcasts and livestreams, and is dedicated to improving the quality of life for bass through research, education, fisheries enhancement, and fish care.