MONROE-WEST MONROE, La. (Feb. 5, 2022) – Chilly temperatures in the mid-20s greeted the 40 Bass Pro Tour anglers in Group A competing on Lake D’Arbonne Saturday morning. It was a cold, tough day on 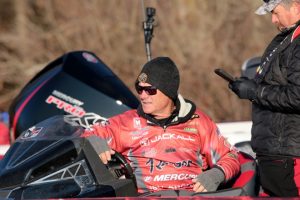 the water for most, but a few 5-, 6- and 7-pound D’Arbonne largemouth still made their national debuts on the MLF NOW! livestream.

After the final bass had been tallied, Hot Springs, Arkansas, pro “The Puma” Stephen Browning caught six bass weighing 21 pounds, 2 ounces, to grab the early lead for Group A on Day 1 of the B&W Trailer Hitches Stage One Presented by Power-Pole in Monroe-West Monroe, Louisiana.

The six-day event, hosted by Discover Monroe-West Monroe, showcases 80 of the top professional bass-fishing anglers in the world competing for a purse of $805,000, including a top cash prize of $100,000 to the winner. The tournament is livestreamed each day at MajorLeagueFishing.com and the MOTV app, and also being filmed for broadcast later this fall on the Discovery Channel.

Browning had a tough morning, catching only one bass for 2½ pounds in the first period. He added two more in the second period, then three in the third period – including a 6-pound, 4-ounce brute and a solid 4-pound, 4-ounce scorable bass – to catapult to the top of the leaderboard.

“It’s been a good day – you can’t complain when you’re in the lead against this crew of anglers,” Browning said. “I’m up in the D’Arbonne Bayou area of Lake D’Arbonne, fishing shallow flats – future spawning areas for these fish. It was tough, but I’ve got confidence in my bait, confidence in my equipment and confidence in my area. That is a big key to success in these grinder-tournaments.”

Browning said that he targeted standing timber and trees – specifically cypress trees that were still alive with green leaves – in 4 to 6 feet of water.

“If I fished any shallower than that, I didn’t get bit,” Browning said. “My key bait was a 3/8-ounce black and blue jig, with a 7-foot, 4-inch St. Croix Legend Elite and a Lew’s Tournament Pro 8:3:1 reel, with 20-pound Gamma Fluorocarbon Edge line. It’s a combination that I’ve got a lot of confidence in, and we put it to work today.

“Overall, it’s a good start to the 2022 season and that is a big deal,” Browning went on to say. “Momentum is very important – we saw what Michael Neal did last week at Sam Rayburn. I had a good day, and now I am looking forward to the challenge of Day 2. I don’t want to go to the Knockout Round on Caney – I want to go straight to Bussey Brake.”

The top 20 pros in Group A after Day 1 on Lake D’Arbonne are:

Overall, there were 101 scorable bass weighing 269 pounds, 6 ounces caught by 37 pros on Saturday.

The 40 Anglers in Group A compete in their two-day qualifying round on Lake D’Arbonne on Saturday and Monday – the 40 anglers in Group B on Sunday and Tuesday. After each two-day qualifying round is complete, the anglers that finish in 2nd through 20th place from both groups advance to Tuesday’s Knockout Round on Caney Creek Reservoir, while the winner of each group advances directly to Wednesday’s Championship Round. In the Knockout Round, weights are zeroed and the remaining 38 anglers compete to finish in the top 8 to advance to the Championship Round on Bussey Brake. In the final day Championship Round, weights are zeroed and the highest one-day total wins the top prize of $100,000.

As part of the event, fans will also have the opportunity to come out take part in the Major League Fishing Festival, part of the North Delta Boat & Outdoor Show at the Monroe Civic on Sun. Feb. 6, from 11 a.m. to 5 p.m. The festival is a chance for fishing fans to meet pro anglers, register for the “Pick ‘Til You Win” game with a top prize of a 2022 Toyota Tundra or a 70-inch 4K UHD Smart TV, visit the MLF Kids Zone and the fishing pond, meet characters from the PAW Patrol courtesy of Kid Casters, and enjoy live concerts from local musicians each day. For more information on the Major League Fishing Festival and the North Delta Boat & Outdoor Show, visit MajorLeagueFishing.com.

About Major League Fishing
Major League Fishing (MLF) is the world’s largest tournament-fishing organization, producing more than 250 events annually at some of the most prestigious fisheries in the world, while broadcasting to America’s living rooms on CBS, the Discovery Channel, the Outdoor Channel, CBS Sports Network, the World Fishing Network, and on-demand on MyOutdoorTV (MOTV). Headquartered in Tulsa, Oklahoma, with offices in Benton, Kentucky, the MLF roster of bass anglers includes the world’s top pros and more than 30,000 competitors in all 50 states and 13 countries. In 2019, MLF expanded its portfolio of catch, weigh, and immediately release events to include the sport’s strongest five-biggest-fish format tournament circuits. Since its founding in 2011, MLF has advanced the sport of competitive fishing through its premier television broadcasts and livestreams, and is dedicated to improving the quality of life for bass through research, education, fisheries enhancement, and fish care.