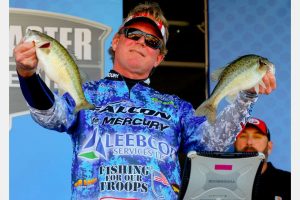 Newberry, S.C. – March 8, 2018 – Falcon Boats, the manufacturer of premium bass boats from the Palmetto State, announces its partnership with returning Bassmaster Elite Series pro Rick Morris of Bracey, Va.  Morris will be running the Falcon F215 powered by a Mercury 250 Pro Verado outboard while competing in the 2018 Bassmaster Elite Series as well as the 2018 Bassmaster Classic next week at Lake Hartwell in Greenville, S.C.

Morris makes his return to the Elite Series after taking a three season break from the sport’s highest level to help his daughter in her quest towards college.

Falcon Boats decision to support Morris was twofold.  Along with the fact that Morris was competing on the sport’s biggest stages, it was an opportunity to support him and his title sponsor; Leebcor Services LLC, in an endeavor to support the U.S. Military through its Fishing for Our Troops mission in support of the U.S.O.

Falcon Boats’ co-founder Stephen Waller said that the whole package was something they could get behind.  “Rick has had a strong career in the Bassmaster Tour and Elite Series, but that wasn’t all,” he said.  His partnership with John Karafa, and Leebcor was something that we could really get behind, with my partner Tim (DePriest – co-founder of Falcon Boats) being a veteran, and his son being an active duty Marine; we wanted to support the whole program.”

Leebcor Services LLC is a construction company that serves only the Federal Government, with a large portion of their projects being military barracks, command centers, administration offices and the like.  Leebcor established Fishing for Our Troops, a non-profit organization designed to provide ongoing support, awareness and fundraising for the U.S.O., the organization who seeks to “strengthen America’s military service members by keeping them connected to family, home and country, throughout their service to the nation.”

Leebcor President and CEO Karafa, a Disabled Service Veteran of the Air Force himself, found synergy in a love of fishing, a desire to support U.S. Troops through the U.S.O. and Morris.  “I met Rick when we hired him as a guide on Lake Toho, and really enjoyed meeting him,” said Karafa.  “As we got to know him, we found out that he was truly a great guy, and that he would fit what we were trying to do, so we decided to support him and enlist his aid in the events we will be running in support of the U.S.O. going forward.”

Morris said he felt like he has found a family, support and motivation through these partnerships.  “John has become a true friend and Fishing for Our Troops has given me more of a purpose to my life and my fishing,” he said.  “Add Falcon Boats to that circle, and I feel like I’m a part of something bigger than my fishing career.  I feel like I have a true support system around me, with a great mission, a truly great boat, friends who will stand with me, and I with them; I am proud to run a Falcon, and to display Leebcor Services LLC on the side of it.”

About Leebcor Services LLC presents Fishing for Our Troops – We want to give back to the U.S. military and their families that give so much for us. Our aim is to bring veterans and active duty military together to make an impact on their lives through fishing. Through seminars and a day on the water with some of the best pro bass anglers in the country, we hope to provide service men and women with a fantastic experience and new skills that will serve them for years to come while raising funds to support the mission of the USO. Find more info on their social media page at https://www.facebook.com/FishingForOurTroops

About Falcon Boats – Falcon boats; established in 2015, currently produces three bass boat models, the F195, F205 and F215.  The boats are designed with the strongest stringer grids and some of the widest beams in their class to provide increased stability and an improved ride on rough waters.

A product of a lifetime of boat building, Falcon Boats was created with the goal to provide a premium quality, high performing, tournament worthy boat at an affordable price.  The company’s founders have over 90 years of combined boat manufacturing experience.  Their vast boat building experience in both the freshwater and saltwater industries are combined to build an exceptional boat for fishability and serviceability. This experience, along with a passion for fishing, provides a wealth of knowledge on what goes into making the best fishing boat.

The Falcon manufacturing facility is in Newberry, South Carolina. Visit them on the web at http://www.falconbassboats.com or contact them at 803-276-0033 for questions or dealer inquiries.