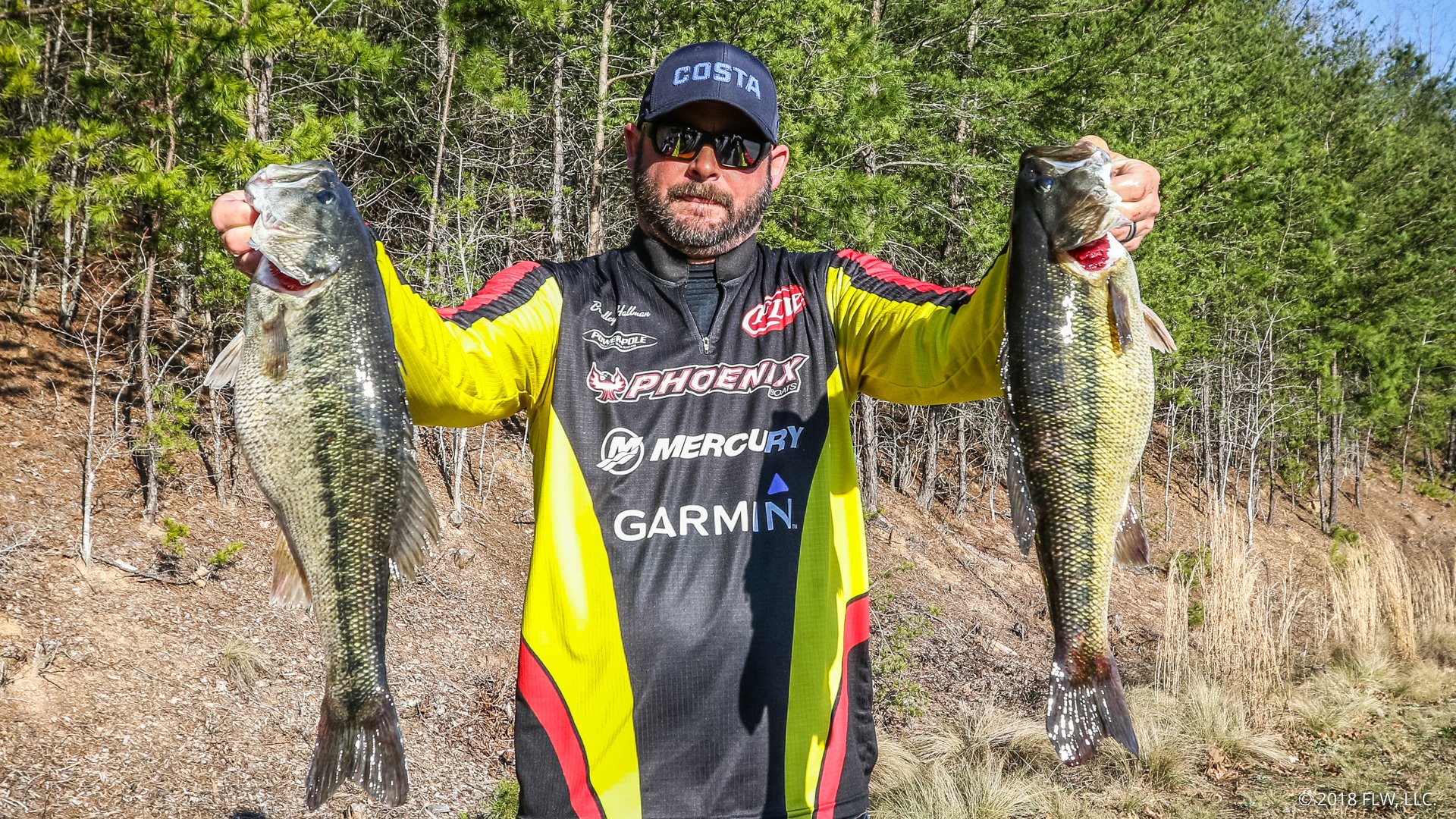 Norman, Oklahoma , weighed a 23-pound, 11-ounce limit of spotted bass to take the lead on Day One of theFLW Tour at Lake Lanier presented by Ranger Boats. Hallman will bring a 3-pound, 6-ounce lead into Day Two of the four day event that features a field of 184 of the world’s best bass-fishing professionals and co-anglers competing for top awards of up to $125,000 cash in the pro division and up to $25,000 cashin the co-angler division.

“It was an incredible day,” said Hallman, who is fishing in his fourth season on the FLW Tour. “To catch five spots that weigh 23 pounds – that’s a dream come true. That’s a bag that I’ll never catch again for the rest of my life.”

Hallman said that he caught his fish “playing the herring game”, fishing at least 45 different places from Brown’s Bridge all the way down to the Buford Dam.

“I only caught 9 or 10 fish today – there were not that many bites,” Hallman said. “I’ve been doing this long enough that I’m starting to understand the blueback herring deal. I know they move a lot – one hour they’re out on the top of the point, the next hour they could be out on the end of the point, the next hour they’re gone. I’m just trying to stay open minded. I don’t have any secret spots or anything like that.”

Hallman said that he caught his big limit of spots on three different baits.

“I had quite a bit going today, I got bit anywhere from 5 feet out to 24 feet. It was just one of those days where I couldn’t do anything wrong and everything went right.”

The top 10 pros after day one on Lake Lanier are:

Cales earned the day’s $500 Simms Big Bass award in the pro division thanks to a 7-pound largemouth bass.

Pro Yusuke Miyazaki of Forney, Texas, was assessed a 2-pound penalty on Day One of the tournament after he was found to be in violation of FLW Tour Rule No. 9 on Tuesday during his practice period. The rule states that safe boating must be observed at all times, and the provisions of this rule apply during practice and from boat check until weigh-in each day of the tournament.

The top 10 co-anglers after day one on Lake Lanier are:

Mark Horton of Nicholasville, Kentucky, earned $250 for the Simms Big Bass award in the co-angler division with a 5-pound, 6-ounce bass.

In FLW Tour competition, pros and co-anglers are randomly paired each day, with pros supplying the boat, controlling boat movement and competing against other pros. Co-anglers fish from the back deck against other co-anglers. The full field of 368 anglers competes in the two-day opening round. Co-angler competition concludes following Friday’s weigh-in, while the top 30 pros based on their two-day accumulated weight advance to Saturday. Only the top 10 pros continue competition Sunday, with the winner determined by the heaviest accumulated weight from the four days of competition.

The total purse for the FLW Tour at Lake Lanier presented by Ranger Boats is more than $930,000, including $10,000 through 60th place in the Pro division. The tournament is hosted by the Gainesville Convention and Visitors Bureau.

Anglers will take off at 7 a.m. EST, Friday and Saturday morning and at 7:45 a.m. DST Sunday morning (Daylight Savings Time begins Sunday) from Laurel Park, located at 3100 Old Cleveland Highway, in Gainesville. Friday’s weigh-in, March 9, will be held at the park beginning at 3 p.m. Saturday and Sunday’s weigh-ins, March 10-11, will also be held at the park, but will begin at 4 p.m.

Prior to the weigh-ins Saturday and Sunday, March 10-11, FLW will host a free Family Fishing Expo at Laurel Park from noon to 4 p.m. each day. The Expo is a chance for fishing fans to meet their favorite anglers, enjoy interactive games, activities and giveaways provided by FLW sponsors, and learn more about the sport of fishing and other outdoor activities.

Also for youth, the FLW Foundation’s Unified Fishing Derby will be held at Laurel Park on Saturday, March 10 from 9-11 a.m. The event is hosted by FLW Foundation pro Cody Kelley along with other FLW Tour anglers, and is free and open to anyone under the age of 18 and Special Olympics athletes. Rods and reels are available for use, but youth are encouraged to bring their own if they own one. The 1st and 2nd place anglers that catch the biggest fish will be recognized Saturday on the FLW Tour stage, just prior to the pros weighing in.

Television coverage of the FLW Tour at Lake Lanier presented by Ranger Boats will premiere in high-definition (HD) on NBC Sports Network (NBCSN) April 18 from Noon-1 p.m. EST. The Emmy-nominated “FLW” television show airs on NBCSN, the Pursuit Channel and the World Fishing Network and is broadcast to more than 564 million households worldwide.