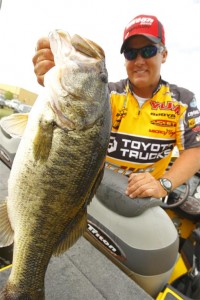 As we’ve seen in the past several major tournaments, Flipping plays a huge role in tournament across the country every year. The combination of heavy cover and fish that are relatively inaccessible bass population makes Flipping a presentation that can be dynamite when things all come together.

As Flipping has increased in popularity, the development of more specialized tackle for the technique has been an industry boon. The line has gotten stronger, the hooks have gotten thicker, rods have been improved and reels have been built to handle the technique.

The lure development have been no different. Recent trends in Flipping see anglers using creature baits and jigs with heavy wire hooks, and it seems that every time we turn around, the next Flipping specific lure that will revolutionize the technique has arrived.

One crossover lure that is often applied to the technique; is atube. The tube; which was originally called a Fat Gitzit by inventors the Garland Brothers , has a reputation for getting bites. As effective as it is in generating bites, the tube has a reputation for losing fish in heavy cover.
The theory on why is that the bulkier bait has a problem of not allowing the hook to fully expose itself during a hookset, and the point never fully penetrates to the barb. 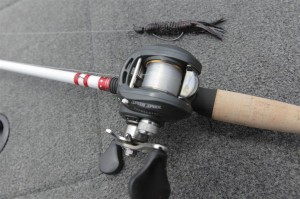 Terry “Big Show” Scroggins is known as one of the best Flippers on tour, and he does a few things to make Flipping Tubes more effective. “The tube is one of three main lures I Flip,” Scroggins said. “I always have the YUM Big Show Craw, a YUM Wooly Big and YUM Vibra King Tube at the ready – they will always eat one of those three for me.”

When a Tube?
While the industry has developed creature bait after creature bait for Flipping; why does Scroggins like a tube? “The tube can represent anything from a minnow, to a bluegill and a craw,” he said. “It seems to get bites in a lot of different instances, but I especially like it in deeper water.”

Scroggins said that he likes to flip a tube when he is targeting bass in water that is six to eight feet deep and they are in heavy grass or other cover. “The tube works in shallow water, but it’s at its best in deeper water,” he said. “I think being in deeper water gives the lure time to spiral more and do what it was designed to do.”

He said he is particularly fond of a tube at Lake Guntersville. “They just seem to bit it better there,” he said.

Rigging
To combat the reputation for lost fish, Scroggins uses a couple of trick – depending on the tube – to increase his hook up ratios. On a Vibra King Tube, he makes a slit in the bottom of the tube where the bend on his wide gap hook enters the lure. “I take a pair of scissors and make a slit about halfway up the bottom of the tube,” he said. “That way, the hook only has to penetrate through one side of the lure to get to a fish.” 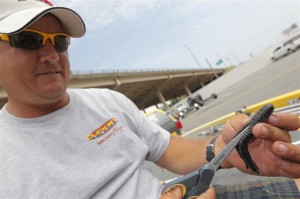 If he is using a standard tube; like theYUM F2 Tube, he rigs the lure on a 5/0 Wide gap hook and merely slides the hook inside the tube. “Kelly Jordon showed me that rick,” he said. “It works really well because it only has to go through one layer of plastic.”

He also said that he rarely pegs his sinkers on a tube – or any lure he flips around vegetation. “If I’m Flipping heavy, dense cover, the bottom underneath that will be silty from decay or spraying,” he said. “A heavy, one ounce or heavier sinker will fall in the muck and bury the bait if it’s pegged, but if the weight isn’t pegged, the lure will stay on top of it.” The only time he pegs a lure is if he is Flipping brush and his sinker is under 1/2-ounce. 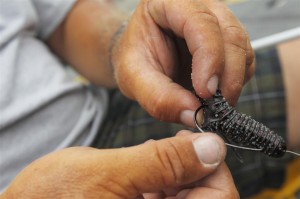 Gear
If he is Flipping in matted vegetation, he chooses to Flip with a new 7’8″ extra heavy action Duckett White Ice rod that he designed for the technique. He always uses 65-pound-test Hi-Seas Grand Slam braided line in heavy grass, but will lighten up his rod to a 7’6″ heavy action Duckett Micro Magic and Hi-Seas 100% Fluorocarbon if he is fishing lighter grass or sparse cover.

He uses a left-handed 6.4:1 retrieve speed Lew’s Tournament Pro Speed Spool for all of his Flipping Needs. “I’m right handed, but I taught myself to use left handed reels for Flipping because bites happen so quickly on the fall,” he said.

Colors
In all of his Flipping; in most parts of the country, Scroggins chooses one of three colors. He will opt for Black Neon (black with red flake) Black Blue Shadow (black and blue with silver flake) or Cooter Brown (brown and orange with gold flake). “Remember that even in clear water, everything under the blanket of grass is dark,” he said. “I want bass to be able to see the lure under there, so I choose my colors based on that.” 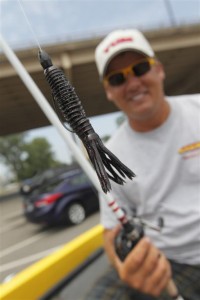 He said he’ will either feel a sharp tick on the fall or the bait will feel “weird.” “There is no reason to feel your way through with this lure,” he said. “They’ll let you know when they’re on it, just let it do what it does and it’ll work for you.”