Every bass angler that touches the water is in search of the biggest fish they can catch. Most every angler out there could recite their personal best fish anytime they are asked about it. Every one of them has a tale to tell about the day they caught the bass that they are currently trying to best. 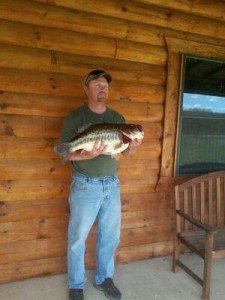 Plenty of anglers have caught 10 pound largemouth, five pound spotted bass or six pound smallmouth out there. However, how many anglers can ever claim that they caught some sort of a record of any one of the species. There are the potential for lake records in one of any thousands of lakes across the country. Of course there is the world record shared by George Perry and Manubu Kurita, and there is a record for each state in the United States, except Alaska.

Williams’ bass eclipsed the previous record set in 1999; a 14-pound, 11.52-ounce largemouth taken from Broken Bow lake. He caught the bass from Cedar lake, an 86 acre lake in LeFlore County on a day that he had caught several other bass, but none that were better than solid keepers.

Advanced Angler caught up with Williams to find out a little more about him and got the scoop about catching and certifying the record catch. 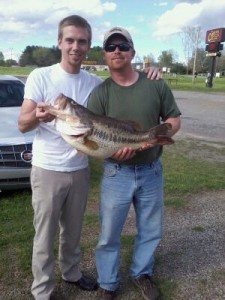 AA – Tell Us About Yourself Benny
BWJr. – I have been a fisherman all of my life. My momma used to take me fishing with her when I was still in diapers. She would set me by the minnow bucket and let me play with the minnows. I live in Poteau, I’m married and have a son, a daughter and a step daughter; all of whom are in their early 20’s. I work nights as a Hassia Technician for Gerber baby Food in Fort Smith, Ark. I run a sterile machine that fills, cuts and seals the cups of baby food. I work nights there so that I can fish as much as possible.

AA – Do You Fish Tournaments?
BWJr. – Yes I do. I fish the FLW BFL tournaments near home. I fished the Okie Division as a Co-Angler last year and ended up being the Co-Angler of the year. This year I am fishing as a Co-Angler in the Arkie Division. I hope to be able to fish more as a pro in the future.

AA – Tell Us About Catching the Fish
BWJr. – I was fishing the mouth of a cove on Cedar Lake with a 1/4-ounce Strike King Jig and Zoom Critter Craw. The jig was a Peanut Butter and Jelly Color and the Craw was a watermelon. There was a shelf coming out of the cove that dropped to about 10 feet.

I had already caught six keepers that day when I got the bite. The big fish bit differently than the others; they had really thumped the jig hard, but this time the rod just loaded up. It really felt weird, more than it did like a bite, but I could tell that it was a fish. I set the hook and the fish immediately came to the surface and tried to jump, but couldn’t.

I fought her towards the boat, then bent down to try and get the net, but it was tangled in the reel handles on the boat. So, I gave up on the net and fought her the rest of the way to the boat. I grabbed her by the mouth and lifted her into the boat and immediately started hooping an hollering. 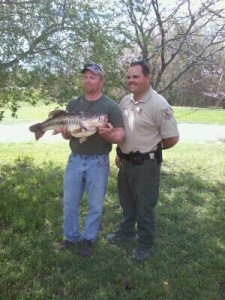 After I gained my composure, I weighed her on a Berkley Digital scale that bounced between 14.5 and 15 pounds. I showed her to an old couple who were crappie fishing near me and then told them I gotta go. I knew that it had a chance to beat the old state record, so I was heading back to call a game warden.

AA – What Happened Next?
BWJr. – I went back to the launch and tried to make a call, but my cell phone didn’t have any signal. So, I found someone in the campground who had a phone that did. I called the Oklahoma Department of Wildlife Conservation and was told someone would be there within 45 minutes.

While I waited, a lot of people wanted to see the fish and we took a few pictures. Then the Game Warden arrived.

AA – So, He Weighed it as a Record?
BWJr. – Not right away. He actually weighed it and told me that I was about three ounces short, so I asked for a re-weigh. he weighed it again and said the same thing.

AA – What Did You Do Then
BWJr. – I left and went up to a little store. When I turned around, the Warden was there. He asked me if he could weigh the fish again, that he thought his new scale was set on pounds – pounds, instead of pounds and ounces. This time he weighed it and looked up with a smile on his face and said “You Got it!” I’ll never forget that moment. She weighed 14 pounds, 12.3 ounces

AA – Then What?
BWJr. – We had to take her about an hour south to get scale samples and do the certifications and unfortunately, she didn’t survive the ordeal. I had planned on releasing her; like I did my 7.40, but she didn’t make it. 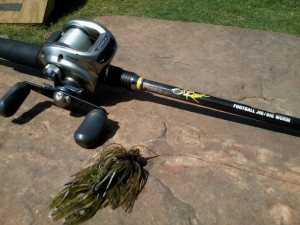 AA – Tell Us About Your Setup
BWJr. – Like I said before, I was using a 1/4-ounce Strike King Jig and a Zoom Critter Craw for a trailer. I threw it on a 7’2″ Wright & McGill Co. Skeet Reese Microhoneycomb Football Jig / Big Worm Rod and a 6.3:1 Shimano Citica 200E spooled with 15-pound-test Seaguar Fluorocarbon.

AA – What Now?
I delivered her to Don McKenzie of Proof’s on the Wall Taxidermy here in Poteau. He’s a great taxidermist and he’s going to do a table top display with her. I’m trying to get a hold of Bass Pro Shops in Broken Arrow to see if they want to display her, but we’ll see where that all ends up.

AA – Anything Else?
I can’t believe it happened. I don’t know how long it will last, but no matter what, I can always say that I caught a state record largemouth bass. It was a great moment, and I’m really proud to have been able to experience it. 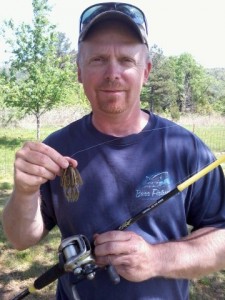