Yep, thatâ€™s how he described it. â€œThis is my Mac Daddy Hammer during the spawn.â€ It was a youthful quip that goes far in explaining what makes the 44-year-old KVD so dominant. A candid verbal expression of endless energy, passion and excitement for what he does.

Iâ€™m not exactly sure what a Mac Daddy Hammer is, but Iâ€™m pretty sure itâ€™s not an early â€˜90s rapper in baggy pants because VanDam is more a fan of Metallica and Saliva. What I do know is that his comical expression of choice indicates a high level of excitement for one of his absolute favorite lures when bass are spawning.

The lure is the Strike King Caffeine Shad in a color called KVD Magic. But before you run out and buy three bags with the expectation of creating instant Kalamazoo hocus-pocus on your local largemouth population, know first the finer details of how the 7-time Toyota Tundra Bassmaster Angler of the Year cast his spell on the spawn. 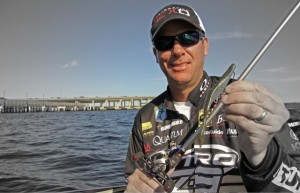 For starters he does just that. He casts. He doesnâ€™t blitz a spawning bed. â€œI used to not do well when a tournament was totally focused on the spawn,â€ admits VanDam about a very rare former weakness in his game. â€œBut Iâ€™ve learned, through a lot of trial and error, to be patient, back-off, and fan cast an area where I know theyâ€™re bedding, rather than rush up to the bed and spook them.â€

â€œThe key to the Caffeine Shad is that it falls vertically, and shimmies as it falls, but you have to be patient and let it sink before you jerk it again,â€ he explained. Like, patience to the point of taking a bite of cookie, and chewing it up, before jerking again. In Kevinâ€™s case, one of Sherryâ€™s lucky cookies.

â€œI rig the Caffeine Shad on a 5/0 Mustad Ultra Lock hook with no weight, and cast it on a 7â€™ 4â€ Quantum EXO rod, with a 7.3:1 EXO reel, spooled with 17-pound fluorocarbon line,â€ said VanDam, who works tirelessly for the sponsors whose products he passionately believes in.

â€œIâ€™m fan casting, and Iâ€™m making long casts, which is why itâ€™s important to have a smooth reel that will let you launch an un-weighted lure a long way without backlashing,â€ said VanDam. â€œThe goal is to get the Caffeine Shad in front of a big female before I get too close and spook her.â€

To know VanDam, is to know he operates in 6th gear whether heâ€™s brushing his teeth or piloting his Tundra to the next event. A willingness to slow down and wait is not much a part of his DNA.

â€œCasting a Caffeine Shad takes patience, man. Itâ€™s tough on me. But Iâ€™ve learned I have to slow down and be patient during the spawn. You either adapt or die out here,â€ concluded VanDam, who notched back-to-back Top 25 finishes during the recent spawn rich Bassmaster Elite Series run through Florida. Seems heâ€™s slowed down just enough to catch what once eluded him