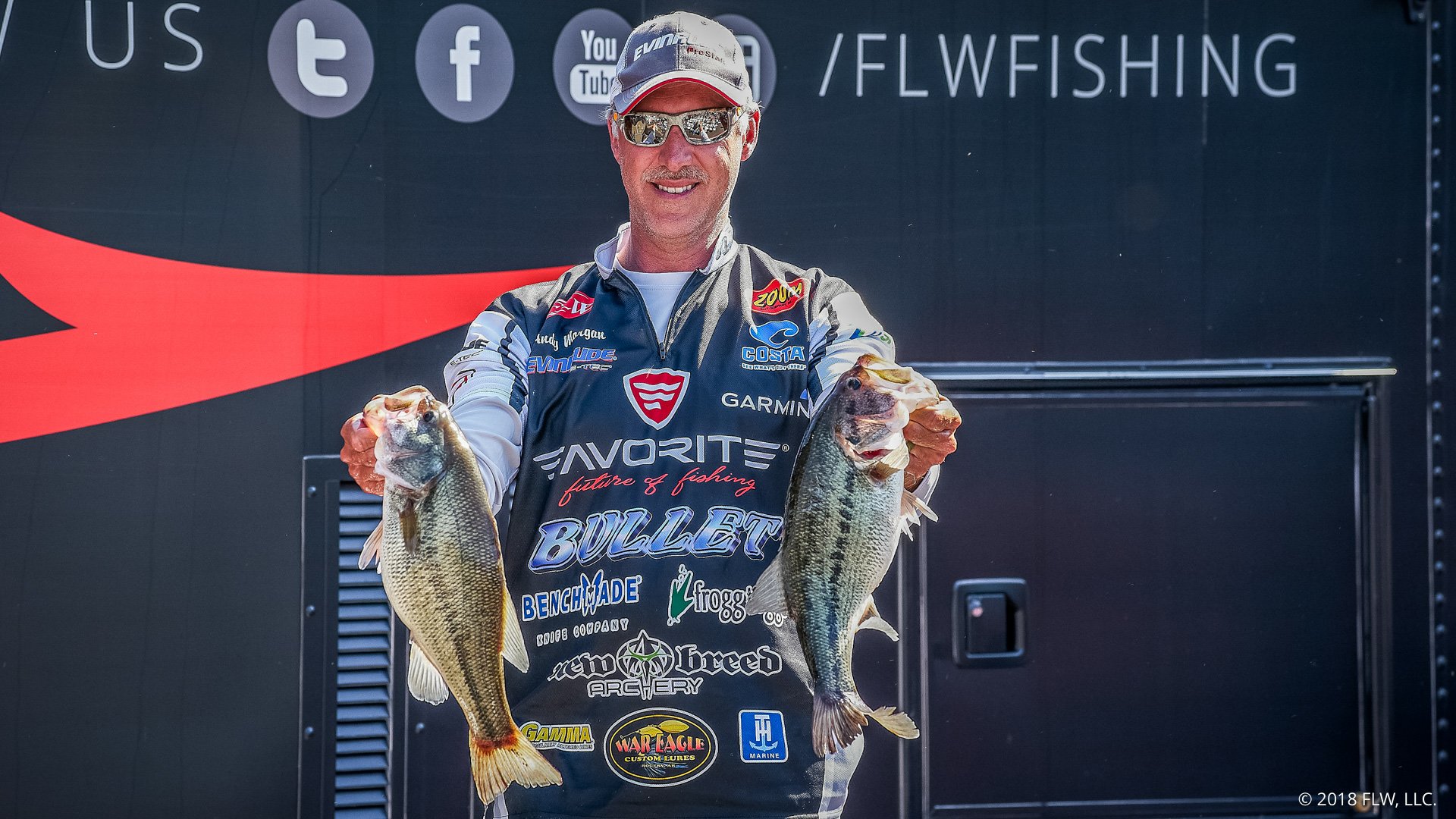 “It felt good today to get out and get some bites,” said Morgan, a three-time Pennzoil Marine Angler of the Year who has logged two triple-digit Tour finishes this season for the first time since 2006. “I knew coming in here that I was going to fish my way. I didn’t care if the smallmouth were biting off the hook, I was going to fish exactly how I liked and I was going to do it all day.

“It wasn’t like I smashed them and caught a ton of fish today, but I had some quality,” Morgan continued. “The five fish that I weighed today were probably the prettiest limit of fish that I have ever caught. They were all female, full of eggs, and not a blemish on them. Just fat, chunky and gorgeous.”

Morgan said he spent the day covering water with a crankbait, spinnerbait, ChatterBait and flipping. He said he caught around 10 keepers, including two spotted bass and one little smallmouth.

“It’s really pretty random – you don’t know what the next one is going to be beside, or how deep he’s even going to be,” Morgan said. “I struggled for a pretty good portion of the day. I caught one every hour or so. Later in the day seemed to be a little better – I think we’ll see some bigger bags tomorrow.”

The top 10 pros after day one on Lake Cumberland are:

Wes Logan of Springville, Alabama, earned the day’s $500 Simms Big Bass award in the pro division thanks to a 5-pound, 9-ounce bass.

Overall there were 824 bass weighing 1,870 pounds even caught by 180 pros Thursday. The catch included 145 five-bass limits.

Reigning Pennzoil Marine Angler of the Year pro Bryan Thrift of Shelby, North Carolina, weighed a five-bass limit Thursday – his 50th consecutive limit weighed in FLW Tour competition – tying the FLW Tour’s all-time record of 50, set in 2014 by pro Cody Meyer of Auburn, California. Thrift can break the record if he is successful in bringing a limit of bass to the scale Friday.

The top 10 co-anglers after day one on Lake Cumberland are:

Rucker earned $250 for the Simms Big Bass award in the co-angler division with a 4-pound, 14-ounce bass.

In FLW Tour competition, pros and co-anglers are randomly paired each day, with pros supplying the boat, controlling boat movement and competing against other pros. Co-anglers fish from the back deck against other co-anglers. The full field of 366 anglers competes in the two-day opening round. Co-angler competition concludes following Friday’s weigh-in, while the top 30 pros based on their two-day accumulated weight advance to Saturday. Only the top 10 pros continue competition Sunday, with the winner determined by the heaviest accumulated weight from the four days of competition.

The total purse for the FLW Tour at Lake Cumberland presented by General Tire is more than $930,000. The tournament is hosted by the Somerset Tourist and Convention Commission and the Burnside Tourism Commission.

Prior to the weigh-ins Saturday and Sunday, April 14-15, FLW will host a free Family Fishing Expo at General Burnside Island State Park from noon to 4 p.m. each day. The Expo is a chance for fishing fans to meet their favorite anglers, enjoy interactive games, activities and giveaways provided by FLW sponsors, and learn more about the sport of fishing and other outdoor activities.

Also for youth, the FLW Foundation’s Unified Fishing Derby will be held at Pulaski County Park, located at 1200 State Highway 3189 in Nancy, Kentucky on Saturday, April 14 from 8:30-10:30 a.m. The event is hosted by FLW Foundation pro Cody Kelley along with other FLW Tour anglers, and is free and open to anyone under the age of 18 and Special Olympics athletes. Rods and reels are available for use, but youth are encouraged to bring their own if they own one. The 1st and 2nd place anglers that catch the biggest fish will be recognized Saturday on the FLW Tour stage, just prior to the pros weighing in.