No, that’s not the way it usually reads, but when you are fishing for bass; or any other predatory fish, you are looking to trigger two of those responses.  The fighting nature is evidenced in the competitive nature of bass when it comes to chasing down a meal when in close proximity to another.  The feeding nature; well, that’s sort of self explanatory. 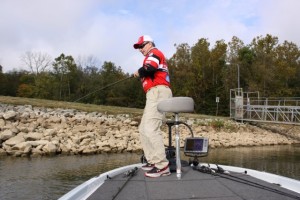 Put a school of baitfish in front of a school of bass, and the likely outcome is explosive.  The chances of seeing the surface of the water mimicking a pot at boil and thousands of shad scales flittering in the water is significant.

Before the Alabama Rig and all of the other castable umbrella rigs formed schools of imitation fish in the water, Elite Series pro Mark Menendez used double rigs to create that same response, and he did it from the surface to the lake bed.

“I’ve done stories on the Donkey Rig in the past, but that’s not the only way I’ve employed a double rig,” said the Paducah, Kent. pro.  “I’ve done well on a topwater double rig, as well as double dropshot also.”

While he cannot use them during practice or competition during the Elite Series any longer, these rigs give him the ability to appeal to the nature of fish.

Menendez said that they appeal to two of a bass’ basest mechanisms.  “Obviously, having multiple baitfish swimming by appeals to their feeding stimulus,” said Menendez.  “But, more importantly, a double rig triggers the competitive nature of bass in a big way.”

His theory revolves around not just the lures he chooses either.  The components used in rigging the techniques also add flash and the appearance of big fish feeding on little fish, so the setups have a lot of appeal.

He also said they are helpful in establishing the colors of lures that bass will strike because he often uses two different color patterns to figure out which they are more willing to strike on a given day.

Menendez rigs it my using two barrel swivels and tying leaders on each; one is three inches longer than the other.  He slides the main line from his rod tip through the eye of the swivel with the longer leader and ties it to the swivel with the shorter leader.  He ties hooks to each one and rigs them with his favorite soft plastic jerkbaits. “I usually use a nine inch and a twelve inch leader configuration,” said Menendez.  “This setup has given me the best action and castability overall.”

He prefers to use 15-pound test Seaguar Invizx fluorocarbon throughout the rig, which he casts on a 6.4:1 Lew’s BB1 reel and 7′ medium-heavy Team Lew’s rod.  He uses 5/0 Sure Grip wide gap hooks from the Ohio Pro Lure Company.  This hook features a wire keeper that helps keep the head of the lure securely rigged, helping with presentations.

He uses one of three Strike King lures to finish his setup.  If he is fishing near docks, pole timber and other cover, or fish are suspended, he opts for the Caffeine Shad.  If he wants a slow fall setup, then he chooses the ZToo, which is made from the Elaztech super plastic and has a neutral buoyancy quality to it.  If fish are aggressive or feeding at the surface around cover, he opts for the Zulu; which is a floating soft jerkbait.  He also said anglers could mix and match baits for customized rates of fall. 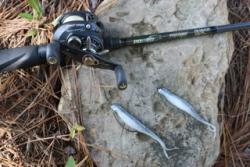 He uses the Donkey Rig for schooling fish a lot, but says he has his best luck with getting a higher quality bite when he lets it sink a bit before retrieving.  “When largemouth and spotted bass are schooling, the better fish seem to sit below and feed on falling bait,” he said.  “But with smallmouth, I usually have my best success keeping it high and moving quickly.”

With either, he employs a twitch, twitch pause cadence, preferring faster with less pauses hen fishing for smallmouth.

Topwater Dropper Rig
Topwater baits, like the Strike King Sexy Dawg, can provide explosive results.  However, there are times that bass just don’t commit to the lure all the way.  Menendez said his favorite rig for these instances; especially in the fall, is to rig a crappie grub on the back of his topwater walking bait.

He ties a 15 to 24-inch dropper line off of the tail of his Sexy Dawg walking bait, then uses a 1/16-ounce Strike King Mr. Crappie head which has a TN Shad Rage Tail Crappie Grub on it.  He uses 15-pound-test Seaguar Senshi monofilament as his main line, then the dropper is 12-pound-test of the same line.

He lobs long casts with this rig on a Team Lew’s rod and 6.4:1 retrieve Lew’s Tournament Pro reel and simply walks it back to the boat.  “This rig actually retards the action of the topwater quite a bit, but I’m trying to mimic the look of a fish chasing another fish; which is plenty,” he said.  “I can walk the lure, or if there is more chop on the water, just reel it in slowly and steadily, or I can pull it forward a ways and let the grub fall; all of these trigger strikes.”

Menendez cautioned anglers to make lobbing casts with this rig.  “If you try to whip cast it like you do other topwater baits, you’re liable to end up with a Rage Tail Crappie Grub as an earring,” he said.

He also suggested that anglers take their time when fighting bass on it.  “If I catch a fish on the Sexy Dawg, I’ll let it fight out there for a few seconds before bringing it into the boat,” he said.  “A lot of times I’ll catch a second fish on the grub.  I won my first tournament as a youngster with this technique.  I caught 10 bass on five casts and had a good weight.” 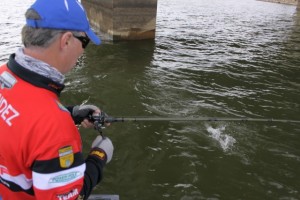 Double Dropshot
The final rig is a double dropshot rig.  He uses a 6’10” or 7′ medium action Team Lew’s spinning reel and Team Lew’s Gold spinning reel with 8-pound-test Seaguar Invizx or Tatsu fluorocarbon and ties a dropshot hook 24 inches from the bottom, then ties a second hook six to ten inches from the end as well.  he affixes his Tour Grade Tungsten dropshot weight to the end, then puts Dream Shot worms on the hooks.

A trick he uses with this setup is to put a darker color on the bottom hook to mimic a crawdad, then rig a shad pattern on the top.  This way he can figure out quickly if fish are on a shad or crawdad bite.  He works this rig slowly, by subtly shaking his rod tip, or by slowly dragging it, letting the waves impart the action on the lure.

Follow Up Tip
Menendez suggested that anglers always have a follow up bait at the ready in case of missed strikes, especially with the topwater  and Donkey Rigs.  “I keep a Rage Tail Grub in Pearl White ready all the time,” he said.   “Then, if a fish misses my double rigged presentations, I can make a quick cast with this, and swim it like a spinnerbait, or let it fall through the area; it works pretty well at times, but you have to be quick in getting the follow up bait out there.”