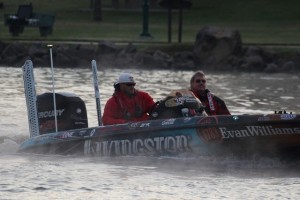 When Hank Cherry burst onto the conscious of national fishing fans with his third place finish at the 2013 Bassmaster Classic in Tulsa, Okla., he had been known to fishing media and ardent followers of the sport for years. The Maiden, N.C. pro had a two year stint on the FLW Tour, and despite four wins in lower level FLW competition and a fourth and fifth place finish on the tour level, to the everyday fan, he was a relative unknown.

All of that changed with his top five finish at the 2013 Bassmaster Classic.

Like many anglers who come from his region of the country, Cherry spends much of his year with a crankbait tied to the tip of his rod. “I think I have been throwing a crankbait since birth,” said Cherry. “So many of us here in the Carolinas have grown up cranking; it’s what the region is known for.”

For Cherry, that means he has always found a way to incorporate crankbaiting into his game plan; even at odd times. “Most people assume that the vast majority of fish move deep in winter, but my experience tells me differently,” he said. “I believe that 80-percent of the bass in my region stay shallow in the winter, and 50-percent of them do across the country; so I always start with a shallow crankbait.” 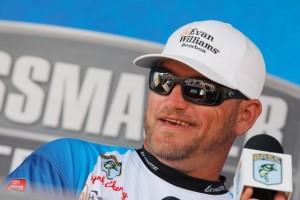 While it may seem counterproductive to throw reaction baits in winter, Cherry said there are reasons it is the right thing to do. “I’ve spent a lot of time putting AquaView cameras around all kinds of shallow objects and the bass are there,” he said. “I’ve seen a single brushpile, rock, dock post or bridge piling with dozens of bass on them in winter.” 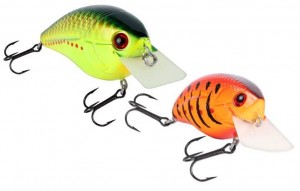 He said the trick is to find the casting angle and retrieve that will make bass strike. “It may take a lot of repetitive casts, but when one fish triggers, you have a pretty good idea of the cast to keep making,” he said. “Once you recreate that presentation, you can catch a bunch of them.”

What Kind of Crankbaits?
The tight wiggle of this category of lures matches the swimming action of shad in cold water. “Everything in winter moves a little slower in the cold weather, and matching their movement is critical,” he said. “If we choose a crankbait with too much movement, it can put fish off in cold water.”

Cherry said that he likes a number of baits, and in fact said that anglers would be wise to familiarize themselves with all kinds of baits so that they can make adjustments on the fly. With that said, he said he tends to stick with flat sided crankbaits this time of the year. “Flat sided squarebills are the main thing to start with because they have a really tight wiggle, which is subtle for cold water,” he said. “If I need a little more erratic action, I use a flatside with a coffin bill.” 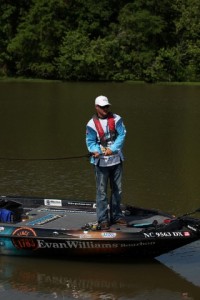 He has long used a variety of hand carved balsa baits and molded plastic baits, but has been incorporating the Team Livingston Lures Howeller baits this winter. He said that he has noticed some increases in strikes, especially when the lure is paused after contacting structure.

“These new models have the right action, and with the EBS Mutlitouch technology, I get strikes when the lure is paused there,” he said. “I can turn it off in tough conditions, or try one of the two shad noises, or a crawdad; it has resulted in some extra strikes for me.”

He said that he likes to choose his colors based on water clarity and where he is fishing. If he is fishing around a lot of rip rap, then he starts with a crawdad color like Guntersville Craw. If he is starting around docks, brush or isolated rock banks, then he turns to a shad color, white in stained water, chartreuse in dirty water.

Shallow Crank Gear
Cherry configures his rod, reel and line to make the best presentation and respond the way he wants in cold water. He starts with a 7′ medium action Abu Garcia Veracity rod, matched with a 6.4:1 Revo Premier or 7.1:1 MGX reel. In colder conditions, he goes with the slower reel to help him stay on a slower pace.

He uses 12 to 14-pound-test P-Line CXX Copolymer line. “I believe fluorocarbon gets a little brittle in cold water, and loses some of its durability,” he said. “I need the line to withstand running into hard cover, so I choose the mono.” 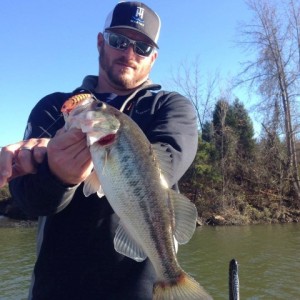 Retrieves
Cherry said that it is critical to not get too far ahead of himself when making his presentations. “Many anglers don’t cover the water effectively when covering the bank,” he said. They’ll make a cast here, then 10 feet down the bank, then 20 feet down the bank, but it needs to be better.” He said that anglers need to space their casts three feet apart or less in order to make sure that they present the lure to the fish effectively.

He also said to keep the retrieve at a slow to medium pace to enable the fish an opportunity to react in time to the lure in the cold conditions. He also said to pause the lure momentarily after contacting cover to allow it to float up a moment. “That is when most of the strikes will happen this time of the year,” he said. “It’s important to grind the lure along and stop when you hit a hard object.”

Final Thoughts
Cherry said that anglers need to experiment with their lures to find what gets the best response, and lands the most fish. “It could be changing hook sizes, or trying different colors, but something will trigger the most response,” he said. “In the case of our Team Livingston crankbaits, try playing with the different sounds, or turn it off. See what makes the fish react, and you might just have hit on a combination that will produce great results for you when others won’t.”