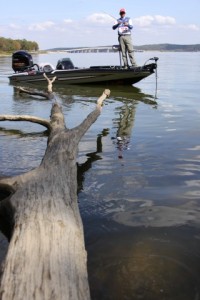 Show of hands.  How many of us are in the postspawn period around the country?

Ah, by that response, the answer would be, most of us.

Postspawn can be frustrating.  We can see cruisers still in the shallows, and we can probe dozens of good looking spots, only to come up with a goose egg for keepers in the livewell.

A look at the recent postspawn tournaments in the pro tours show that it can be an extremely difficult time of the year to catch fish.  Even those who feel like they have it dialed in one day can often find themselves on the flipside of that image the next day with little to show for their efforts.

Van, Tex. Bassmaster Elite Series pro and Lake Fork guide James Niggemeyer likes to look at the postspawn with a systematic approach that revolves around the nature of the fish to try and help limit the search time.  “Bass are really in three stages in the postspawn,” said Niggemeyer.  “They are either guarding fry, resting or feeding up; I call it their protect, recover or feed periods, and they can overlap.”

With that in mind, Niggemeyer has developed a system for finding and catching bass in a much more rapid fashion during this time of the year.

Protect Mode
Almost immediately after a bass’ eggs hatch, the female of the pair tends to pull away from the nest and head for deeper water looking for rest after the arduous spawning period.  while the females move on, the males will wait behind and guard their offspring.

Niggemeyer said he likes to target those fish with one of three applications, and he will often catch fish on any one of them or all three throughout the day.  His approach features a topwater chugger, a super shallow crankbait or a stickworm.

“Those clouds of fry will gather in the shallows around any visible cover,” he said.  “The male bass will often hold right near them and try to ward off bluegill or other marauding predators to help his fry survive.  In these instances, I like a Strike King Spit-N-King, a Series 1XS crankbait and an Ocho.”

He begins by holding back off of cover; be it laydowns, docks or grasslines and making long casts with the Spit-N-King on a 7′ medium action St. Croix Legend Tournament and 6.5:1 Ardent Edge Elite spooled with 30-pound-test TUF-Line Supercast Braid with a 24-inch leader of 14-pound-test Gamma Polyflex Copolymer line.  he casts the Spit-N-King around cover and uses a slow, methodical plopping retrieve to try an irritate the bass into striking. 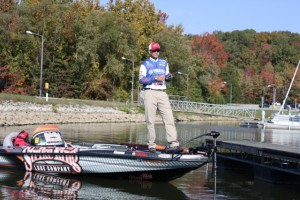 James Niggemeyer on the Docks – photo by Dan O’Sullivan

If the bass won’t come up to the topwater, he turns to the super shallow, waking wobble of the Series 1XS crankbait.  He tosses this on the same reel, a Mojo Bass Crankster and 14 to 17-pound test Gamma Polyflex.  “I’m trying to mimic a bluegill or a crawdad; something that will attack fry,” he said.  “I’ll throw this bait around the cover, and a lot of times bass will charge it, and I can either catch them with this, or go back to them with another presentation.”

That is when he turns to the Ocho soft stickbait.  He lets this lure fall slowly over the spot where fish swirled and often gets the bite before the bait hits bottom.

Recovery Tactics
If he is trying to locate those females that have pulled out, or after the males have completely abandoned the shallows after the fry have scattered, Niggemeyer looks for vertical cover leading out of the spawning areas.  Those can be docks, standing timber – like on Lake Fork, where he guides year ’round – or even grasslines that present a place for bass to hide.

He targets these with one of his favorite approaches, a Flippin’ or pitchin’ technique.  However, this is a slightly different approach.  Instead of bombarding them with heavy Punching weights and giant line, he tends to slow down and scale down.

“I use a heavy action 7’4” St. Croix Legend Extreme rod, with a high speed 7.2:1 Ardent Edge Elite reel and 20-pound-test Gamma Edge Fluorcarbon line with either a Strike King Rodent or a Hack Attack Jig on it,” he said.  “I use lighter, Tour Grade Tungsten sinkers and jigs because I want the lure to fall more slowly.  Florida Strain, and bigger bass as a whole tend to be slower after the spawn, so I don’t want the lure to rocket past them.”

He tends to use colors that mimic bluegill this time of the season because whether they see themselves in protect mode, or they are keying in on the bluegill spawn, bass seem to respond well to colors that are in those shades.

Feed Bag
After bass have left the transition area, and before they go out to their summer home, they often stop on secondary points and feed up on shad that are moving in to spawn themselves.  This is where he likes to use a mid depth crankbait like a Series 3 or a Series 5. 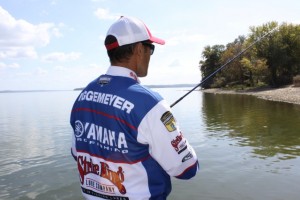 “This is a time when shad can be the complete focus and the main diet,” he said.  “So I pick shad imitating colors and try to fish in that six to 10 foot range, letting the crankbait bang off of rocks on those points.  This is also a great way to fish the outer edges of grasslines too.”

He uses the same setup as with the Series 1XS crank, but turns to 12-pound-test Gamma Edge Fluorocarbon for better feel and depth.  “This can actually be the most fun bite an angler can get on in this period,” he said.  “For quantity and quality, it can produce well if they are on it.”

Key Thoughts
Niggemeyer said that this is not the time of year to sit in one spot.  “I like to move around a lot this time of the year,” he said.  “The bass will likely be grouped up, so moving quickly to locate them is important.

“This will likely be something that is easily patternable throughout a section of the lake, so once you get a few bites on a specific type of lakebed element, try to locate more of it in the section of the lake you’re in,” he said.  “You should be able to run around and pick up fish here and there and make a pretty solid day of it. It can be a junk fisherman’s paradise this time of the year, but these are ways I’ve found to be able to run a pattern and do well.”