Skeet’s Beat – Down and Dirty

Kim and I got a little down and dirty in the Merrell Down and Dirty Mud Race this weekend. Some friends of ours told us about it, and when Kim signed up for the 5k, I decided to join in too.

The race course is around Folsom Lake, a lake near our home in Northern California, it featured rope ladders and mud pits that you had to crawl through. We even ended up having to wade through the lake in water chest deep for a while. One of the mud pits was so low that we were basically swimming through mud to get to the other side.

The race was fun, Kim and I decided to stay together for the whole ace, and we both finished in the 40â€™s of our individual divisions. We were pretty proud of it considering that Kimâ€™s group had more than 200 racers and mine had over 150. 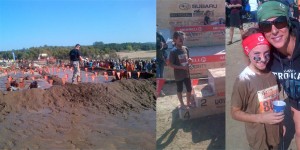 Our oldest daughter Lea even got in on the act; she entered the kidsâ€™ race, which was a one mile version of our mudder. Lea finished fourth overall in the girlsâ€™ group, and said she probably could have done even better had she not had to slow down and walk around people who were blocking the trail.

The whole event was pretty cool, they had a band and concessions and they even brought in water trucks with hoses for cleaning off after the race and changing rooms for people to get out of their muddy clothes. To say we were muddy is an understatement; I went through eight Q-Tips trying to get my ears clean after I got out of the shower once we got home.

We had a lot of fun.

I took my brother-in-law and his wife to Folsom Lake to go fishing last week for a little while last week, and at first, the bite really sucked. We tried a bunch of stuff on the main lake and didnâ€™t get a bite until we went into the back of a creek and started fishing there. My sister-in-law caught a couple of fish on a dropshot rig and then we started tossing Chartreuse Shad Lucky Craft SKT DRâ€™s around; then we caught some decent ones.

Itâ€™s funny how things can be different; I actually had to burn the bait on my Victory 701 reel with 12-pound-test Berkley 100% Fluorocarbon to generate bites. Good thing I had it on my 7â€™ SGlass Cranking Rod, because when they hit it, they stopped it, and a graphite rod would have pulled it out of their mouths.

Iâ€™ve got a little traveling to do this week. Dickâ€™s is opening three new stores in the Tulsa, Okla. area this weekend, and me, Shaw Grigsby and Ike are each supposed to spend the day at those stores. Iâ€™m pretty sure that weâ€™ll each spend our whole day at one of the stores, so come and see me if you are in the area and can stop by.