Just after 6:45 this morning a caution light flashed atop a school bus on a foggy road near the Bassmaster Elite Series launch.

Just over the hill from where the school bus stopped to pick up students, Terry “Big Show” Scroggins was running nervously through what his Toyota teammate Gerald Swindle describes as “Scooby Doo thick” fog on West Point Lake.

Scroggins, who typically worries about nothing, emphasis on nothing, was visibly concerned about being able to make it safely through the soupy west Georgia morning air. “The fishing is so sporadic on this lake, that catching a bass is the least of my worries this morning. The fog is my biggest concern,” said Scroggins. 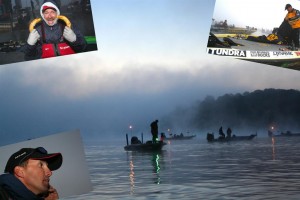 “I’m really kind of amazed we didn’t have a fog delay,” he added. “I get pretty nervous when I can’t see where I’m going, or who might be running up behind me. I guess that’s why they check to make sure we all have boat insurance,” said the likeable Floridian.

Scroggins, who has placed in the Top 10 in three of four events thus far this season, then turned his attention to fishing. “Heck, I didn’t have a keeper at 10:00 a.m. yesterday. And then in one hour around lunchtime, I caught 16-pounds. Then I couldn’t hardly catch a fish the rest of the day. You’re going to see things shake-up on the leaderboard today. Fishing won’t be nearly as good today as it was yesterday.”

Perhaps it was poor visibilities that lead to a B.A.S.S. cameraman struggling to find current tournament leader Edwin Evers as the emcee called-out over the microphone in an effort to connect the two before blast-off. Evers sat beached near the ramp, stating, “I just always seem to do best on lakes that I don’t know much about. I won at Erie and I won at Lake Norman, and just like here, I had no knowledge of those places. I think it’s because when I don’t have a history on a lake, I tend to fish more wide open,” theorized Evers, who proved how good these guys really are when he hauled a 21-pound limit to the scales yesterday.

Let’s hope he’s right. Between “Scooby Doo Fog” and sporadic bass, these guys are going to need all the luck they can get.