By the time the scales stopped spinning at West Point Lake, Kevin VanDam felt like he’d been sitting between Dr. Jekyll and Mr. Hyde for four days on a west Georgia roller coaster ride.

KVD posted up and down daily limits ranging in weight from 23-pounds on Day 2 to 7-pounds on the final day. In the end, he posted his third Top 12 in five events thus far this season, finishing this one in seventh place. 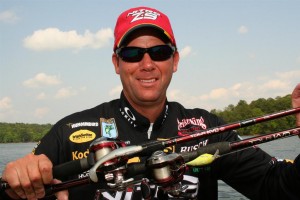 The man who virtually expects to win every time he launches his boat, made no excuses for coming up a little short at West Point.

“You gotta capitalize on the conditions every day, and I didn’t do that,” said VanDam in a matter of fact fashion.

“My best pattern throughout the week was throwing a Strike King Shadalicious swimbait around isolated stumps and laydowns in shallow water. I rigged it with a 3/8-ounce Mustad swimbait hook, and threw it on 17-pound XPS fluorocarbon line with a Quantum 6.6:1 Tour KVD reel and a 7’ 2” TKVD medium heavy rod. I like that particular reel with swimbaits because it helps me slow down to the perfect speed for that bait,” explained VanDam.

“I went out there to win today, but I didn’t have a single keeper at nearly 11:00 a.m., so I tried to pull off a last minute miracle with the square bill and my cranking system. I caught a fast limit with it, but not nearly enough weight,” said the 6-time Toyota Tundra Bassmaster Angler of the Year in humble fashion.

“This lake has been like Jekyll and Hyde,” he said in summation on the weigh-in stage before climbing into his Toyota Tundra and heading north five hours to Lake Murray with hopes of finding a reservoir with a consistently more congenial personality.