Tough Bite? Give ‘Em a Snack with Mark Menendez

Tough bites can be downright frustrating.  The picture is the same, show up at the lake for a tournament, the reaction baits are all tied up, and visions of five pounders leap in our heads.  We envision carrying five bags loaded with heavy bass and the crowd going nuts as we are handed our trophy. 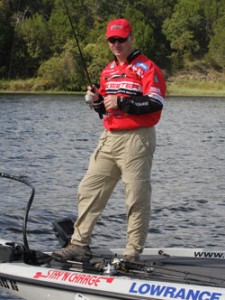 While we can picture the upside, the typical result is often the opposite.  With dozens of boats on the water the bass can respond with lockjaw.  There are the days that an aggressive morning bite can occur, followed by tough conditions.  Or, the sound of the morning blastoff coupled with several days of heavy traffic can cause them to clamp down.

Another situation that can cause bass to clam up is a change in the weather.  The bluebird days after a passing cold front can leave anglers feeling neglected and forlorn.  What was a wide open snap fest the last two days has turned into something like feeding a vegetarian a hamburger; less than fruitful

Do what Paducah, Kent. Elite Series pro Mark Menendez does.  Give ‘Em a Snack!

A Snack?
Menendez has found throughout his career that bass will often take in a subtle lure in difficult conditions; in essence, having a snack as opposed to a full meal.  “I call these things the Snickers Bar of bass lures,” he said.  “Someone may not be hungry, but they have room for a snack, like a little bite size Snickers Bar we give to the kids at Halloween; that’s what I try to offer bass.”

Menendez believes that the finesse worm has been classified as a light line, clear water, tiny hook deal, and he said that it couldn’t be farther from the truth.  “I catch bass on finesse style worms in stained water as much as I do clear water,” he said.  “I think that using a straight tailed finesse type worm is more versatile than people think, and it’s been somewhat misapplied.”

Instead of looking at the thin bodied, straight tailed worms as a panic technique, Menendez views them as an opportunity to overcome.  “These are great mop up baits for those high pressure times in small areas,” he said.  “When a lake is fishing small, I can give them something they’ll eat, or I can try to make them eat bigger noisier lures; I choose to get bites. 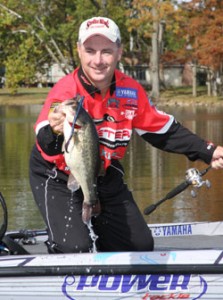 When other anglers are trying to force feed fish with jigs or heavy flip baits, Menendez goes subtle.  “I don’t often have to change areas, just adjust the way I present them,” he said.  “I can put this lure in places you might not expect would create the strike, and catch quality fish.”

Where and How
He looks at the areas he’s fishing, and lets the environment dictate his style.  “I look at my area and rig it only a couple of ways depending on where I am,” said Menendez.  “I use a seven-inch Strike King Perfect Plastics KVD Finesse worm on a Tour Grade jig head in sparse areas or deeper water, a light Texas Rig for clear shallow with some sparse cover, and I can use a heaver approach and flip it in vertical cover.”

If things get to the point where he really needs to goad bass into striking, he turns to one of two versions of a drop shot.  The first is what he calls a Bubba Shot.  “I learned it in California, and it saved my bacon in Florida one year,” he said.  “A Bubba Shot is basically a drop shot rig, but it’s set up on light braided line; it’s really good around vegetation.

If he’ needs an ultra finesse approach, he will turn to light line and a spinning rod.  “If I get really desperate I can dropshot a five-inch version of the same worm on a dropshot rig,” he said.  “This is my last resort, but it can produce when everything else won’t.”

Tackle for Finesse
Menendez said it is also important to pay attention to the cover in deciding what gear to choose throwing the finesse worms on.  “People can overpower their hooks on these techniques,” he said.  “If I’m fishing a light Texas rig, I’ll scale down my rod, and line to avoid bending out the hook.” 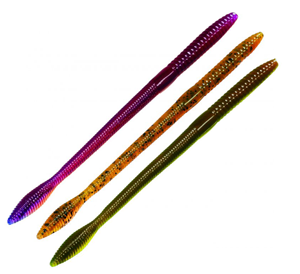 For a light Texas Rig or his Bubba Shot approach around cover, he chooses a Power Tackle Paragon Series PG144-70, a seven foot medium heavy rod with a Lew’s Speed Spool Tournament Pro in 6.4:1 retrieve speed.  He chooses 12 to 14 pound-test fluorocarbon, or 20 to 30-pound-test braided line for these techniques.  He does bulk up his gear when he goes for the heaver Texas Rig around vertical cover, choosing the same reel, but going for 20-pound fluorocarbon and a Paragon Series PG104.5-76 medium heavy Flippin’ Stick.

For the Shaky style approach or the drop shot rig, he chooses spinning tackle, a 6’6” rod and a SS200 Lew’s Speed Spin filled with six to eight-pound-test fluorocarbon line.

Retrieves
He cautions anglers to not overwork their lures, no matter where they are fishing.  “This approach is best when you don’t over work your lures,” he said.  “A slight, rhythmic shaking of the lure is best in any situation.  I try t make the lure look alive, but I want it to sit next to the cover and look like a creature rooting into the bottom; these are the best ways to generate strikes.”  Of course when he’s using the heavier flipping approach, a couple of short hops before retrieving and moving to the next target is recommended 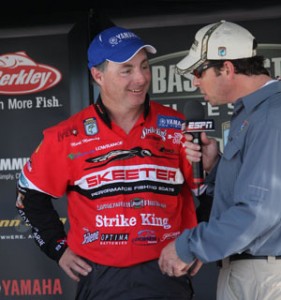 Colors
Menendez believes in keeping things very simple, he chooses to let the water dictate his color selection.  “I water with two feet or more visibility or more, I choose translucent colors,” he said.  “I like watermelon, green pumpkin, Mutilator and Dirt, which is a benign subtle color that won’t put anyone off.”  If the water is dirty, he opts for the Bold Bluegill color, which he said puts out good flash and presence into the water.  He also said he prefers not to use shad colors, because the worms primarily mimic bottom creatures.

Saving Florida
Referring to his Florida experience with the Bubba Shot, Menendez said it was a matter of survival.  “I had a really good bag on one day, but like it often does in Florida; a storm front came through, and the fish got lockjaw in that shallow water,” he said.  “I tied on the Bubba Shot, and pitched it around the pads and weed clumps and salvaged enough bass to stay in the top 10 for the event.  It was a tough tournament anyway, and that little worm saved my butt when it got tougher.”

For some Great Snack Size Baits – Check Out MonsterFishingTackle.com