When guys look back on their lives and are asked what some of their favorite memories are, any number of things can fill that slot. For some, a memory of a past athletic conquest, for others a favorite car or truck; still others might think of a golf game, a motorcycle trip or another activity.

For the outdoorsman, a hunting or fishing trip, and if they involve good friends, it’s even better. Times spent laughing our way through a day on the water can be some of our most cherished flashbacks.

One such trip happened recently when Bassmaster Elite Series pros Skeet Reese and John Murray – longtime friends – hosted a group of friends on the outing of a lifetime. Like the trip, the group was anything but usual. 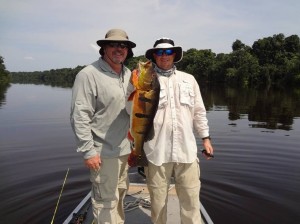 The trip was a peacock bass fishing expedition to the Amazon River in Brazil, and the parties included Bassmaster Champions, Major League All Stars, Cy Young Award Winners and a two-time World Series Champion.

Reese and Murray had a trio of Major League Baseball dignitaries with them on their trip to the jungle. The group included Philadelphia Phillies pitcher Roy Halladay, St. Louis Cardinals pitcher Chris Carpenter and retired Toronto Blue Jays relief pitcher B.J. Ryan. Also along for the trip was Ryan McCollough, a marketing executive with Wright & McGill Co. / TroKar Hooks and friends and family of Halladay’s.

The making of the trip began a year earlier when Reese and Halladay were paired for a bass fishing excursion on California’s Clear Lake. The Phillies put the pair together in celebration of Halladay’s perfect game from 2010 against the Florida Marlins.

Reese and Halladay hit it off and stayed in touch throughout the year; and it didn’t take too much talk for the pair to decide to organize a peacock bass fishing trip to the Amazon. They talked to their friends and pulled it all together with Steve Yatomi of Adventure Travel Alliance.

The early December trip was almost rescheduled because the amount of rainfall upstream of the area created high water that made the fishing more difficult than usual. But, the fact that the ballplayers would begin their training regimen and heading for Spring Training meant the planned 11 day schedule would have to work out.

“It wasn’t the best fishing, but we were still able to catch some peacock,” said Reese. “We caught a couple of 12 to 15 pounders, and even had a couple of chances at 20 pounders, but they broke off. We still managed to have a great time.” 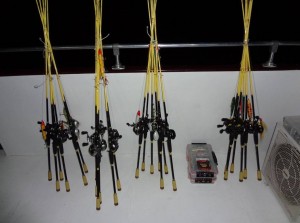 They fished with custom made Skeet Reese Tessera Rods by Wright & McGill Co. Each member of the party got a pair of rods custom made to handle the giant, hard fighting peacock bass common in the Amazon. Reese and Murray packed an assortment of Lucky Craft and River2Sea lures designed to handle the fish as well.

Even with the forethought of packing all of the lures, the high water made reaching where the majority of peacock bass were hiding, so adapting became the rule of the day. Even with all of the high dollar lures available, the most productive lure was a lead jighead tied with bark. Reese said the guide stripped some bark off of a tree and used the material to hand tie a skirt around the head, and most of the fish taken through the week were on this lure. “If I’d have known, I could have made my suitcase a lot lighter,” said Reese.

The trip had its interesting moments outside of the fishing. One evening the group decided to go on a hunt for Caimen; a cousin of the American Alligator. They group managed to bag a pair of them, and they even had an encounter with an Anaconda.

Halladay and Reese looked onto the bank at one point and saw a man perched atop a tree. As they got closer, they realized the man was sitting there naked. Through the guide, they were able to find out that he was a local fisherman who was wading the river in search of exotic fish for export when he was attacked by the snake.

The snake latched onto his rear end, but he able to avoid being wrapped up. Instead, the reptile wrapped around his outboard and tore the motor off his dugout canoe, flipping it over in the process. Reese and Halladay helped him
gather his belongings and tow him back to his village. 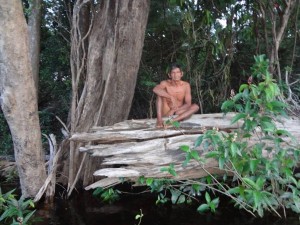 With all of the fish caught and the shared experiences, the party had great things to say about the outing. Carpenter said that he was excited about the outing, and the people. “This was a great experience that I will never forget,” he said. “I had a blast fishing with a great group of guys who I count as new friends; I hope I get to do this kind of thing again with them.”

Murray felt similarly, but as a lifelong baseball fan, he enjoyed hearing all of the stories from the ballplayers. “I love baseball, and getting to hear about the games and the things that go on in the league was amazing,” said Murray. “I spent most of my time sitting in the back soaking it all in; it was a great time.”

Halladay said the whole experience was worth more than he paid for it. “This was the best fising trip of my life,” he said. “Good friends, great atmosphere and good fishing; I’d pay double to do it again.” 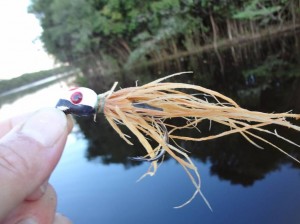 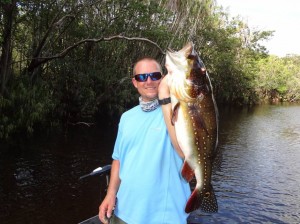 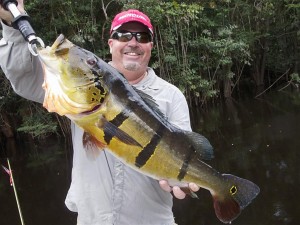 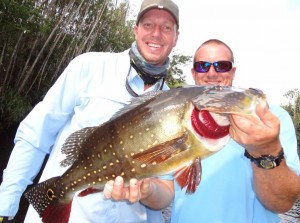 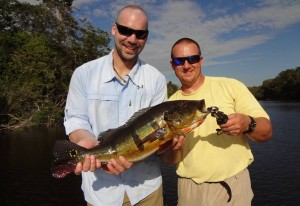 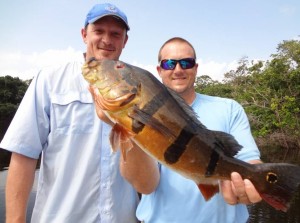