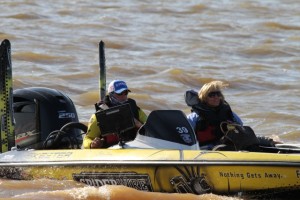 The Lakeland, Fla. pro loves to compete, and his reputation for doing it well has made him a favorite any time he slides his boat in the water on tournament day.

Lane has a reputation for being great around grass. His upbringing in Florida means that he can make his living with a Flippin’ Stick with the best of them. His stat sheet proves that he is no one trick pony, as he has cashed checks in 47 of his 62 Bassmaster entries. That number is testament that he can fish in a variety of ways.

The 38-year-old pro exhibits tremendous versatility on the water. He has cashed checks shallow, and he has won tournaments offshore. Any angler worth his salt has to be able to fish in a variety of different ways to amass the career earnings and record Lane has since he joined the Bassmaster tournament scene five seasons ago.

So, what does Lane; the Amazing Spiderwire Man like to do this time of the year with all of his tacklebox available to him?

“I really love to throw topwater this time of the year,” said Lane. “Postspawn fish and summertime fish will eat topwater baits all day long; you just have to know how to work them in a way that’s effective for the type of waterway you are fishing.”

Topwater Arsenal
Before we get too far down the discussion on waterways however, let’s talk about Lane’s favorite setups. He revealed that he likes three basic topwater lure types; walking lures, poppers and prop baits. “I really have a lot of confidence in those lures,” he said. “I like the Sebile Ghost Walker, the Sebile Splasher and the original Devil’s Horse just about anywhere in the country.”

He prefers to use his topwater baits on shorter rods, high speed reels and monofilament line. While so many anglers have turned to braided line, he prefers to have a little stretch and the flotation of the monofilament. 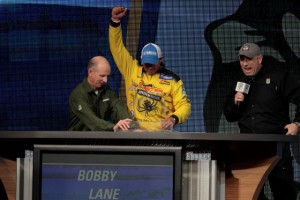 “I use a 6’9” medium-heavy Abu Garcia Veritas rod for most of my topwater fishing,” he said. “The one exception is on places like Lake Murray in South Carolina where I may need to make extra long casts when bass bust on herring. But, I generally throw 7.1:1 Revo MGX reel and Berkley Trilene Big Game 15-pound-test line, unless I’m at a Herring Lake, then I’ll go to 50-pound-test Spiderwire Ultracast braid with a 25-pound-test Big Game leader to keep the hooks from tangling in the braid.”

Waterways Make a Difference?
That’s right. According to Lane, a smart angler looks at the kind of fishery he is on an allows that factor alone the chance to dictate how he works the lure. He said that he has basically three categories of topwater lures that he relies on for general surface fishing needs, and each one has its place on any given body of water. However, you must take into consideration the type of waterway.

“You have to fish river systems differently than you do lakes,” said Lane. “The fish in each of these types of fisheries have a different set of behaviors that you need to become aware of to get the right response to a topwater lure.” Lane said that you need to fish faster in rivers and slower on lakes.

No matter what the type of lure he is fishing, Lane considers where he is fishing. “I really think about the way that fish react on each type of waterway and tailor my approach to that,” he said.

Rivers = Movement
Lane said that he believes river fish require constant movement to trigger strikes on a topwater lure. “Think about it,” he said. “Baitfish are always moving and always repositioning in rivers. The current makes everything that lives in that river remain in constant motion, so my topwater bait should be as well.”

Lane said that he keeps all of his topwater baits moving forward at all times on a river. I he is using the Ghost Walker, he steadily repeats the rhythmic cadence of the side to side gliding action, but speeds it up or slows it down according to the mood of the fish. With the Splasher, he continues to move the bait forward with a popping motion, and can skitter it along quickly, or keep it just steadily, hypnotically popping, but the bait must remain in motion.

“Things that stop and sit still on a river are not natural,” he said. “Of course, you will catch some fish with a stop and go retrieve, but you’ll catch more with one that keeps the lure moving.” He said he thinks of any body of water that has a lot of current; even that of a hydroelectric dam, as a river.

Stop and Go on Lakes
However, natural lakes, or those that don’t have a tremendous amount of current often need a stop and go retrieve. “I pause my baits a lot more frequently on lakes,” he said. “Baitfish and Bass on lakes can become really lethargic, and sometimes need additional coaxing to get the strike.”

For that reason, he pauses his walking baits after a couple of twitches, and he allows his popping style baits to sit motionless next to cover frequently, and this is the type of lake that is built for a prop bait. “This is where I will pull a Devil’s Horse forward with the rod tip and then let it sit for as long a 20 to 30 seconds,” he said. “I’ll do the same with popping baits and walking baits, because bass just seem to need extra time on a lake sometimes.”

He said bass will strike a lot when the lure is paused, and will also commit right as you go to move the lure again after a pause. 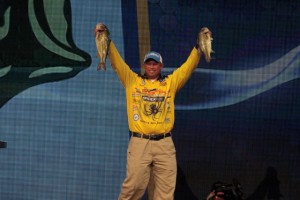 Final Tips
Lane offered some important tips to anglers about topwater fishing. First, he suggested the use of high speed reels. “I can always speed up with a fast reel, but I am limited to the highest speed on a slower reel.”

He also said anglers need not be afraid to use monofilament line for topwater. “Everyone has gone to braid and fluoro these days,” he said. “Braid can tangle hooks and fluorocarbon sinks; don’t be afrid to use mono, it’s great line for surface lures.”

He also said to lighten up on rods. “Don’t use too stiff of a rod for topwater fishing,” he said. You’ll get into trouble with rods that are too stiff and lose more fish. A nice light tip is perfect so that you can work the bait and land the vast majority of fish that bite.”